Composition with an Eye toward Development

Some professors wonder why educators even teach spelling instruction because of spell checkers. Hopefully, their students will not become sign makers (or cake decorators or church secretaries or ...) when they grow up. 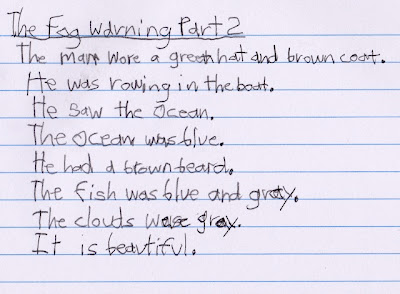 While Pamela lags her peers in writing, she has come far. At least, she self-corrects spelling and grammar. She cares about how she writes for she changed grey to gray and was to were in her latest written narration of Fog Warning by Winslow Homer. She enjoys typing on Skype with my husband Steve through my account. The other day I found this exchange:

Tammy: I will buy a pizza today.

While I do not teach composition, I do assess what Pamela types. The first sentence is perfect. I have never corrected her writing with a red pencil as my English composition teacher did in high school, and Pamela can still write a perfect sentence. What a feat for someone who struggled with verb tense in her late teens! When Steve did not take her seriously, Pamela added emphasis with I said and by capitalizing buy and pizza. I love how subtly she made her point!

Pamela could improve upon that second sentence by adding punctuation, I said, "Buy a Pizza today." But, I do not plan to draw attention to it. Who wants to chat if someone turns everything into language arts lessons? Charlotte Mason's method works on composition without constant correction. The living books we read have many examples of dialogue. The copywork in her commonplace book has quotations. I need to teach her to enclose partial quotes in quotation marks and capitalize the names of countries, which I will incorporate into her studied dictation. 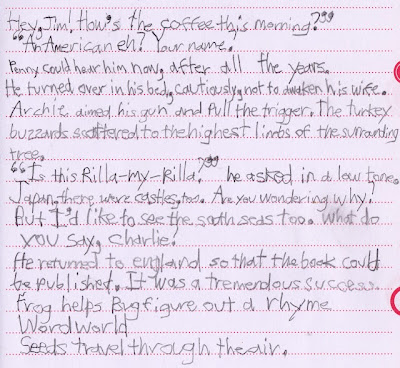 One sentence cracked me up! Commonplace books are basically written scrapbooks of items a person finds important. Pamela turned her old copywork book into a compilation of lists. In this one, Pamela summarized an episode of WordWorld which she watches at my parents' house: Frog helps Bug figure out a rhyme.

Dialogue is part of our recent studied dictation. While the swan dictation has no quotes, the one about Michael Faraday does. I can overlook the misspelling of Ribeau (a French surname) and massaging (a tricky word with French roots). Our next dictation will focus commas and capitalization for quotations.

Because of Pamela's aphasia, I tabled written narrations until this year. I am not alone in waiting for the right time developmentally. One mom at the Living Education Retreat shared that her teenager with autism struggled with writing. She found a therapy that helped him with his oral narration, and she had him spend a year retelling everything. Now, he is writing wonderful narrations with more confidence.

Early is not necessarily better! A recent study analyzing the lives of people over an eighty-year period concluded that, "Early school entry was associated with less educational attainment, worse midlife adjustment and, most importantly, increased mortality risk”. Why? “Most children under age six need lots of time to play, and to develop social skills, and to learn to control their impulses. An over-emphasis on formal classroom instruction—that is, studies instead of buddies, or staying in instead of playing out—can have serious effects that might not be apparent until years later."

This is exactly what Charlotte Mason stated over a century ago! It is why I am a purist in trying to apply her educational ideas before I try others.

It is why I trust recitation of nursery rhymes and Bible songs for children under the age of six. They need to play with words rather than endure formal lessons.

It is why I have not abandoned penmanship (even cursive) in the era of keyboards. Brain imaging reveals that "in children who had practiced self-generated printing by hand, the neural activity was far more enhanced and 'adult-like' than in those who had simply looked at letters." Cursive offers even more benefits: "multiple areas of brain become co-activated during learning of cursive writing of pseudo-letters, as opposed to typing or just visual practice" and "cursive activates areas of the brain that do not participate in keyboarding."

It is why Pamela and I write our own copywork, which John Piper chose as the number one technique for reading and understanding the Bible. The article on cursive noted that "writing letters in meaningful context, as opposed to just writing them as drawing objects, produced much more robust activation of many areas in both hemispheres."

It is why I do hardly any lessons on composition, which Mason discussed in her final volume. The building blocks of composition lie in memorizing beautiful language, reading living books, retelling them in your own words, copying your favorite turn of phrase, and writing passages from dictation. But, above all, oral narration is the foundation of written narration. Uncorrected, uninterrupted oral narration!

Here are my favorite quotes from Mason on the topic of composition in the elementary years:


Children of six can tell to amazing purpose. The grown-up who writes the tale to their 'telling' will cover many pages before getting to the end of "Hans and Gretel" or "The Little Match Girl" or a Bible story. The facts are sure to be accurate and the expression surprisingly vigorous, striking and unhesitating....

Two or three points are important. Children in lB require a quantity of matter to be read to them, graduated, not according to their powers which are always present, but they require a little time to employ their power of fixed attention and that other power which they possess of fluent narration. So probably young children should be allowed to narrate paragraph by paragraph, while children of seven or eight will 'tell' chapter by chapter. Corrections must not be made during the act of narration, nor must any interruption be allowed....

Children must not be teased or instructed about the use of stops or capital letters. These things too come by nature to the child who reads, and the teacher's instructions are apt to issue in the use of a pepper box for commas....

As the object of every writer is to explain himself in his own book the child and the author must be trusted together, without the intervention of the middle-man. What his author does not tell him he must go without knowing for the present. No explanation will really help him, and explanations of words and phrases spoil the text and should not be attempted unless children ask, What does so and so mean? when other children in the class will probably tell....

But let me again say there must be no attempt to teach composition.


P.S. For a modern look at Mason's ideas, try to get a copy of Dr. Jennifer Spencer's dissertation: "Self-Made Writer: A Grounded Theory Investigation of Writing Development Without Writing Instruction in a Charlotte Mason Home School."
Posted by walking at 22:13 4 comments:

Digital Detox on the Prairie 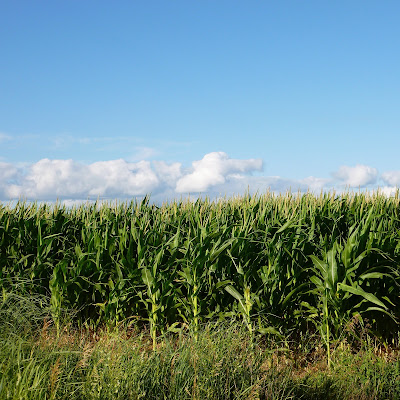 At first blush, one might think we did not leave home. Clarendon County offers plenty of corn fields, except that the harvest in Carolina is further along. 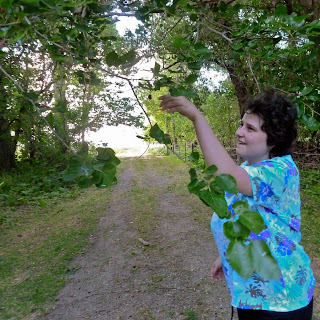 The first thing we did was sample the harvest of fruit. Pamela has not dined at a mulberry tree since we left Pennsylvania when she was a little girl. You can see her smile that she is enjoying the nostalgia. She feels the magic. 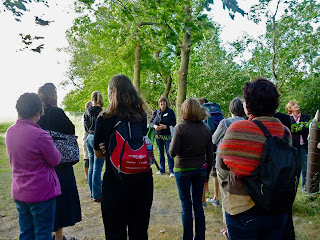 There is nothing like going on a nature walk with kindred spirits at the Living Education Retreat. 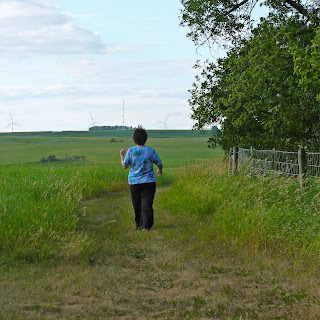 Pamela got tired of hearing us talk about what a nature walk is. She already knows that. She went ahead and walked the walk with the wind whipping her hair.

With half our attention tuned into the conversation, we watched Pamela walk out of sight, return, flap her arms in the whirlwind, and twirl like Maria on the mountain. 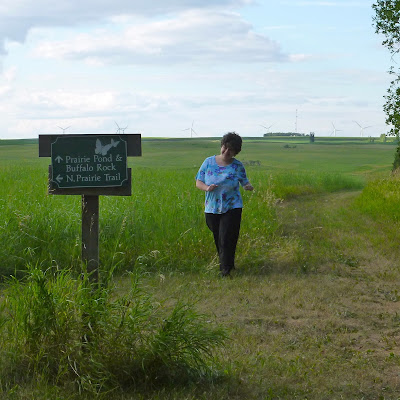 Then, she waited patiently in her sit spot. 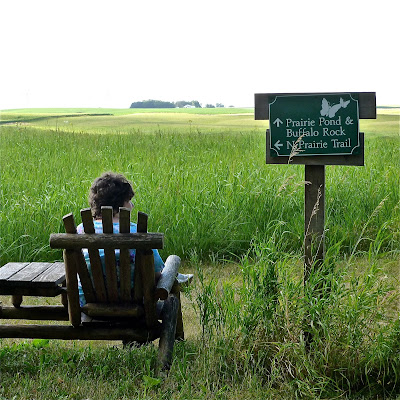 I never visit cornfields in Carolina. Somehow, being with like-minded friends made cornfields seem more inviting. So, I moved in closer. 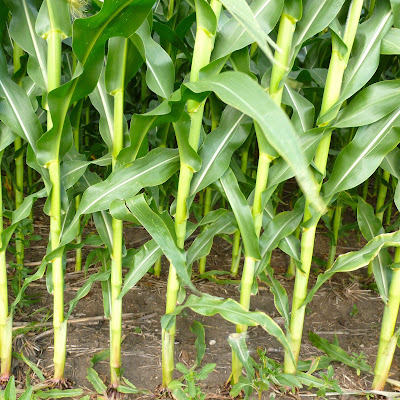 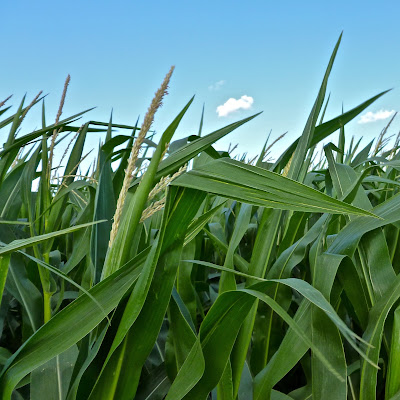 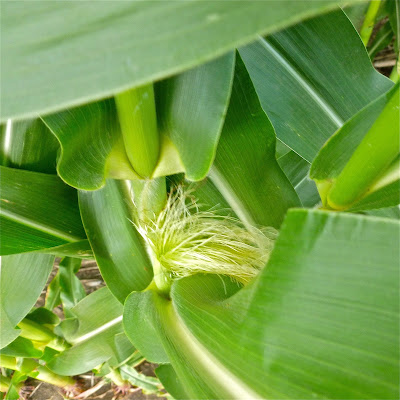 While I took pictures of corn, Pamela explored the prairie grass. It was a miracle that neither one of us brought "visitors" (er, ticks) back with us. Some people did! 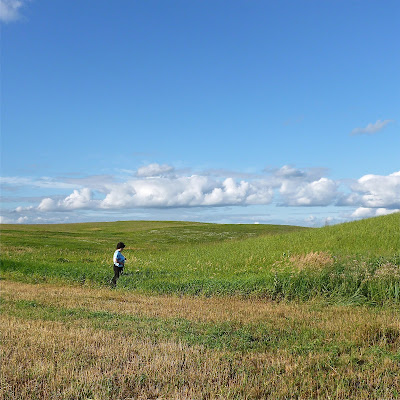 While Pamela explored the grass, I took pictures of flowers. 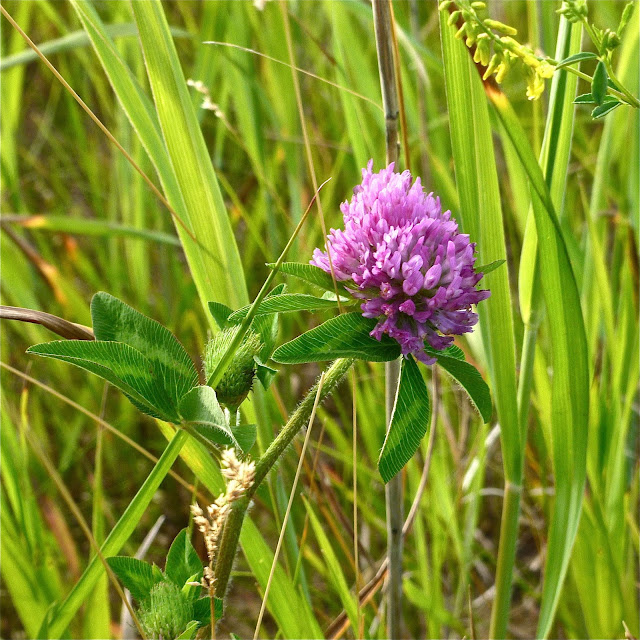 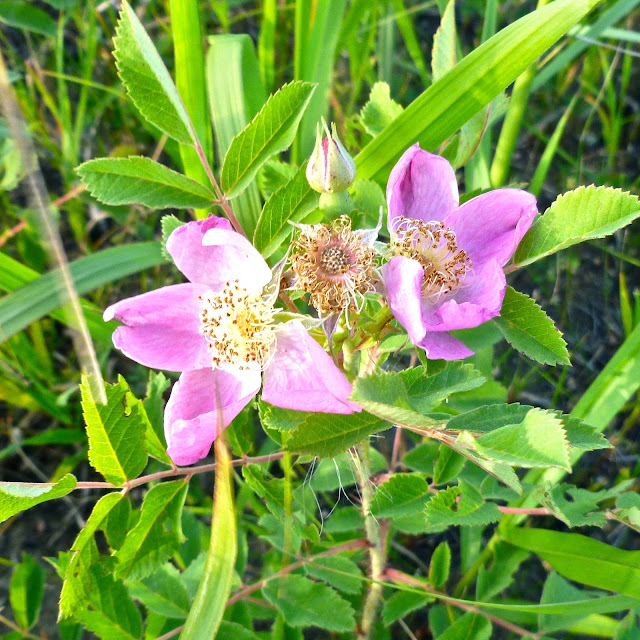 While Pamela looked for the creek where the tree stood, I took pictures of seeds. 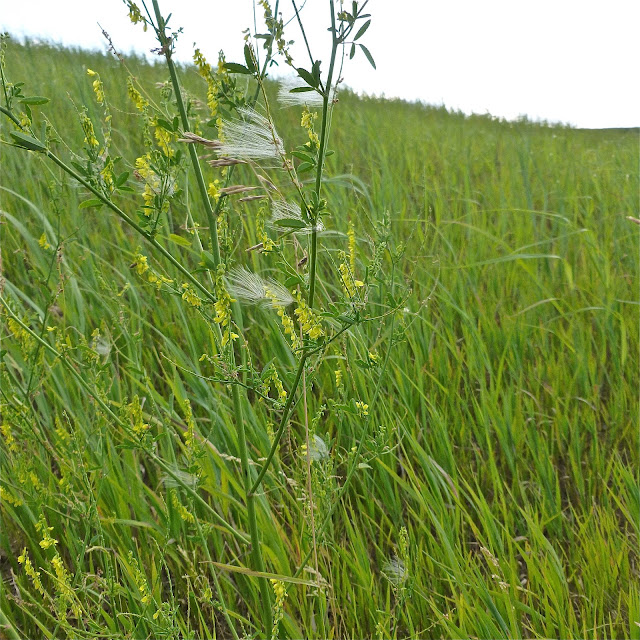 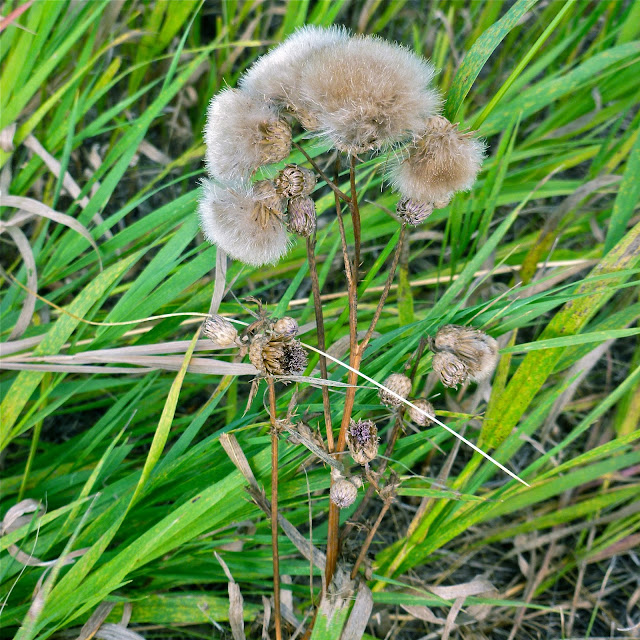 No trip to the prairie would be complete without seeing grasshoppers. I managed to get a close-up of one! 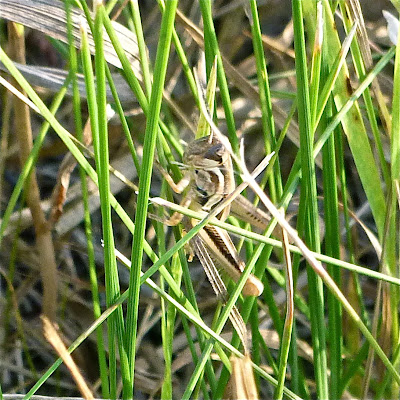 One of my fondest memories of the walk was stopping to do some watercolors. Many of us did! We had quite an international gathering painting next to the cornfield. Jemimah, from Australia, wearing her read hoodie, sat in the grass painting. I am especially fond of Jemimah because she gave me some mulberries that made my strawberry shortcake unforgettable! Charlotte Mason blog carnival hostess with the mostest, Amy from Peru, joined us, and I hope to see her work in a nature study painting when she returns home (hint, hint). 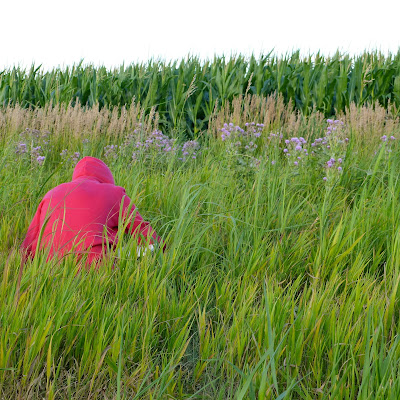 Sheila from Canada encouraged me to paint a detail of this milkweed flower, and Jennifer, also from Canada, loaned me some water. Meanwhile, Pamela finished the walk and kept herself entertained while the rest of us painted. 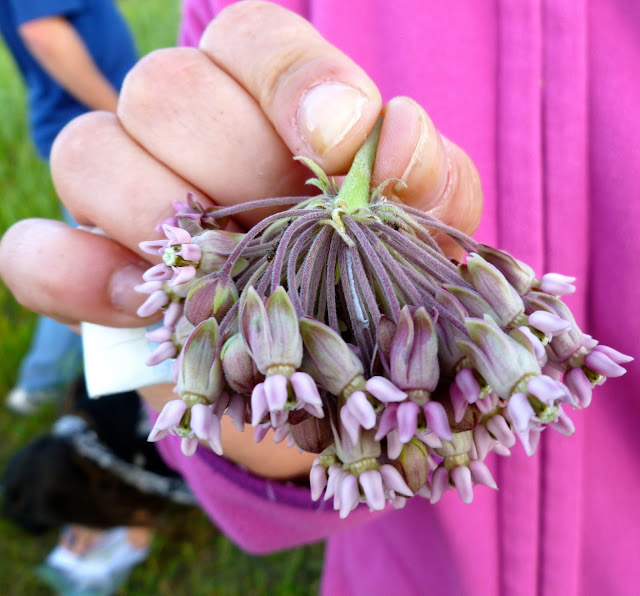 Here is my little attempt at the details of a milkweed. 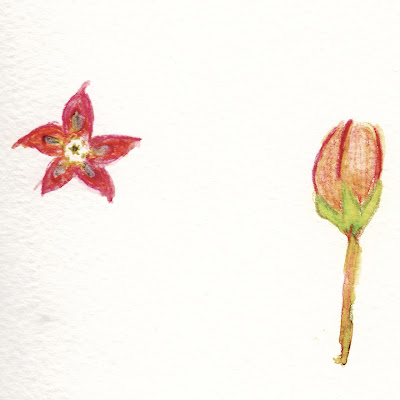 We didn't just detox on the nature walk. Some of us survived the retreat sans Internet, so I hope I didn't scare my friends on Facebook. The wireless router worked but few knew how to enter the IP address manually. We survived—more importantly, we bought books and I have my very own flutter mill! 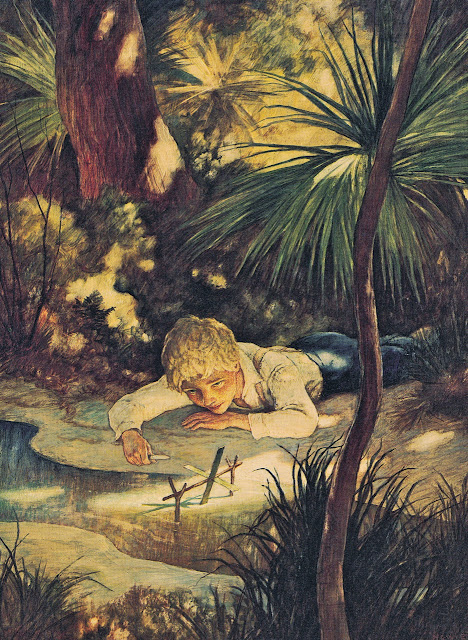 I now own a copy of The Yearling with illustrations by N. C. Wyeth while Pamela purchased the Dorling Kindersley Eyewitness Book Oceans by Miranda MacQuitty! I also picked up a children's biography of Amelia Earhart because our home in Kansas is the city of her birthplace and Adam of the Road for the school. I was thrilled to win Dorothy Mills' Book of the Greeks—which I plan to read with Pamela after we finish Book of the Ancient World—for correctly answering the question, "Who was the second child in the Pevensey family in the Chronicles of Narnia?" Steve confiscated the Mills book to read. That's fine since we need to finish the other book first. 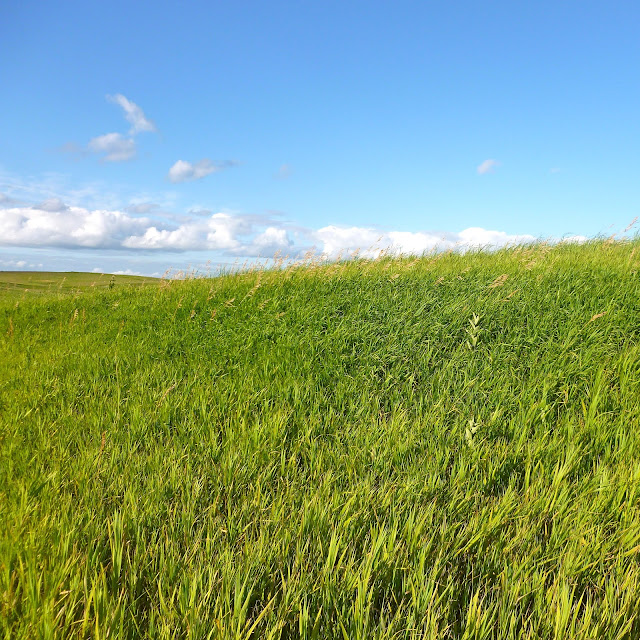