The Value of Nature Study

Nature study accomplishes many educational goals: in addition to building a foundation for science, carefully studying nature builds the habit of attention and hones observational skills. You start asking questions about what you see and begin looking up information to answer your questions. You become more resourceful about figuring out what you see by going beyond appearance: sounds, location, behaviors, patterns, movement, etc. You get exercise and fresh air, especially if your nature study involves a hike. You learn to appreciate the design, order, imagination, and beauty of God's handiwork!

When you start exploring nearby parks, you add to your knowledge of geography and history. For example, a nice park up the road from us is Poinsett State Park, which has interesting geographic features like sand hills and swamps and mountain laurels festooned with Spanish moss. The Civilian Conservation Corps built a coquina bathhouse in the 1930s as part of FDR's New Deal. The park's name honors Joel Roberts Poinsett, our first ambassador to Mexico, who introduced the poinsetta plant to the United States. When you participate in formal programs like the upcoming Owl Prowl, you build relationships with other naturalists, scientists, and artists.

Keeping nature notebooks involves art, language arts, and science, all rolled into one. You add words to your vocabulary as you learn to express yourself orally and in writing. Because you date your entries, you become intimate time, seasons, weather, and calendars. You may even dabble with some poetry or Bible reading as you search for the write quote to go with a sketch.

Materials are quite inexpensive: a sketchbook with 80 pound paper, watercolor pencils, watercolors, and brushes. If you are unsure of how to get started, you could find information online about dry brush and other techniques. My biggest tip--be very sparing with water--I ruin most of my pictures with too much water! A seventh grader from the Perimeter School in Duluth, Georgia described the process extremely well in the Spring 2007 issue of The Review (page 27). Teachers describe how they teach first and second graders nature study in the Winter 2007 issue of The Review (pages 29-31). Charlotte Mason herself spent a good portion of her first book describing nature study and the outdoor life for young children. 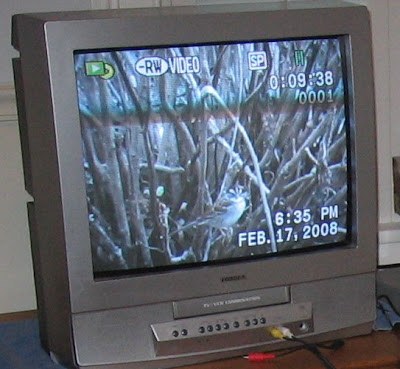 Do not be afraid to use a little technology in your nature study. At the 2006 Charlotte Mason Conference, Amber Benton gave a great talk about how to take advantage of technology in this philosophy of education. David and I learned this lesson on Saturday. We were filming inside a thicket next to our house and thought we heard a cardinal. We did not see a thing, but our camcorder caught a flash of a cardinal quietly waiting for us to get lost. We did not see it until we reviewed the recording. We are able to make better drawings of shy critters by pausing the recording and soaking up every detail. The picture on the television is a chipping sparrow we drew. 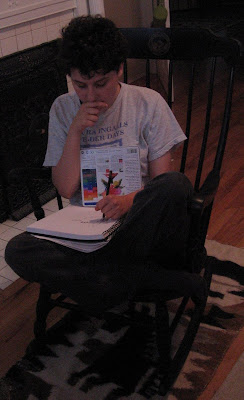 Nature study involves nearly all of your senses: beyond seeing, you listen for sounds and pay attention to smells. If you can tame a chickadee or chipmunk, you incorporate touch. At the 2007 Charlotte Mason Conference, Carroll Smith pointed out how nature study involves many areas of the brain (check out the diagram of the brain in his slide show)! Nature study done right involves the frontal lobe because it requires executive function (thinking, organizing, planning, and problem solving). It involves the motor cortex (movement), sensory cortex (sensory processing), occipital lobe (vision), and cerebellum (balance). It tasks the parietal lobe in making sense of the world (and spelling) and the temporal lobe for memory, understanding, and language. Carroll wrote, "Memory is frequently increased by using multiple pathways of the brain," and nature study provides great scope for making memories. 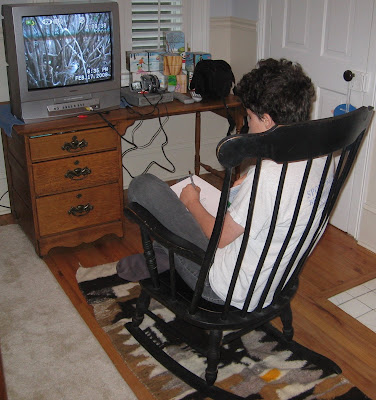 Nature study provides wonderful and exciting opportunities for RDI therapy. While filming four chipping sparrows in a hydrangea bush yesterday, Pamela and I took turns speaking declaratively about what we observed. I captured several minutes of digital recordings of the sparrows, searching for food. Even though we maintained our distance from these shy guys, I zoomed in on one of the birds. Imagine our delight when we reviewed the footage on television today and noticed that the sparrow was pecking at a pecan from our very own tree. 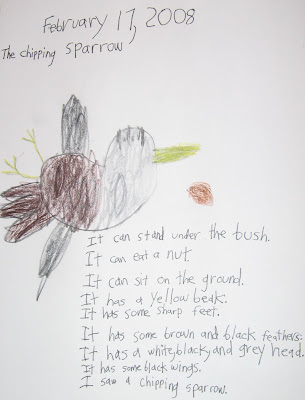 I framed Pamela's nature notebook entry for two objectives: (1) paying attention to color and (2) using more descriptive language. We paused the recording to freeze the bird and allow time for careful observation. At first, Pamela made the beak and legs black. When she finished drawing her sparrow, I pointed to the television asked her what color the beak and legs were. She told me yellow, so we erased the beak and legs and she redid them in bright yellow. I pointed to the tail and asked her if her bird had a tail. She grabbed some pencils and added a tail. I pointed under the beak and said, "This is called the bib. What color is it?" She said it was white, so I erased the gray bib and she colored it white.

On Friday, Pamela had written a very sparse description of two crows, completely lacking in adjectives with very little action: 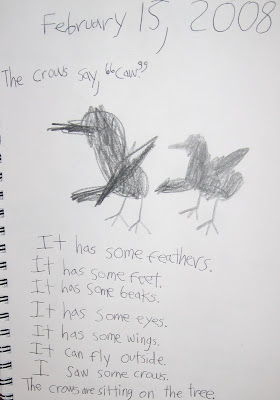 I did not want to dominate the writing of her entry about the chipping sparrow, so we talked about ways of improving the crow entry but made no corrections. First, we read her story, adding adjectives as we went. She said, "It has some black feathers," while I said, "It has some shiny feathers." Then, we talked about the actions of a crow: "The crow is flying high in the sky," or "The crow is walking on the ground." Because I wanted to see how much she took in from our dialog, I left the room while she wrote the following, delightful entry:


It can stand under the bush. It can eat a nut. It can sit on the ground. It has a yellow beak. It has some sharp feet. It has some brown and black feathers. It has a white, black, and grey head. It has some black wings. I saw a chipping sparrow.

As you can see, there is no end to the value both educator and children receive from nature study.
Posted by walking at 15:31

Such a helpful post. Thank you for all the links! I love nature study; I think it's our easiest-to-get-around-to-doing subject. That doesn't help with college admissions, alas, so I suppose we should do a bit of math today, too. Sigh.

What a wonderful post. :-) I love Pamela's notebook pages.