Jonathan Levy, a specialist who works with children in the autism spectrum, wrote an awesome article called "Sometimes It Doesn't Matter What the Data Says." Now, don't get me wrong! As a statistician, I love data and playing with numbers rocks my world. Seriously.

I agree with Levy in saying that relationships trump data any day:

There is a something that is much greater than getting eye contact/interaction from a child with autism: building a relationship based on trust and predictability. It is from this relationship that eye contact, listening, communication, physical contact all emanate from.

What do I say to the person who believes that allowing children to avoid eye contact is training them to ignore people like the Special Ed teacher in the article?

If you do something worth paying attention to, even an autistic child will look over in your general direction. If you give them opportunities to learn that looking at another person's face helps you understand how they feel, where they are looking, whether or not they care about what you are saying, then ASD children will want to pay attention, especially if you avoid forcing compliance.

Sometimes, certain people are worth ignoring. When a teacher taught only what was in the book, I spent classtime writing letters or doodling--what old fogies like me did before cell phones were invented. When I took a stochastics class which had no book except for the lesson plans the teacher consulted for writing his notes on the board, I hung on his every word, spoken or written, and kept copious notes. When an opinionated person tells me there is only one way to do something, I bob my head mindlessly like a plastic Chihuahua in the back of the car. When Pamela is on one of her esoteric monologues, I ignore her, too. If we paid attention to everyone trying to get our attention, we'd go stark raving mad.

Aren't we supposed to teach our kids absolute compliance? No! What if a snot-nosed brat tells your daughter to lift her shirt, you want her to think for herself and ignore him. Rigid rules like obeying all people in authority because some people in authority ought not to be trusted. In fact, I think that an aide or teacher that forcibly turns my daughter's head falls into that category.

Yesterday, Pamela wanted brownies, but I had other things to do. So, I stalled and waited to see what she would do. When she noticed I was doing the dishes, she decided to get everything out for me: the mix, bowl, can opener, eggs. I ignored her and started folding clothes. She grabbed the scissors and cut open the bag. Every once in awhile, she glanced at me, so I smiled and encouraged her warmly. Occasionally, she needed a little help and I gave her a boost. She even put the glass pan into the preheated oven!

I did not tell her to bake brownies all by herself; I simply gave her the opportunity to think of it on her own. She could have waited for me, and I probably would have gotten to it a day or two later, giving her more time to think about baking for herself. 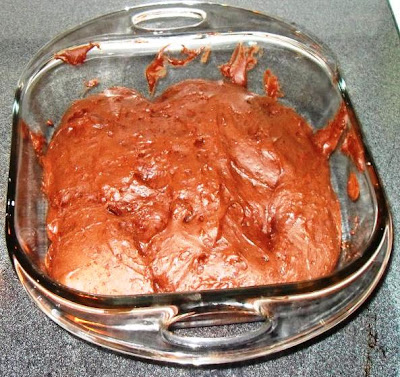 You may notice that she did not do the neatest job in pouring the batter into the pan. I try to strike a balance between giving Pamela opportunities and expecting her to do what is really important. The brownies were for us, so presentation was not a big deal. If we were baking it for company, I would have encouraged her to clean the sides of the pan. I decided her discovery that she can bake all by herself was more important than making everything worthy of Martha Stewart.

I found out recently that Pamela loves the children's bulletin at church. Last Sunday, Pamela stayed home from church. I brought home the bulletin and left it on her bed. She did not do a thing with it until Thursday. She filled out the whole thing and only needed help with unscrambling three words (companions, anything, astonished). Every time, she makes a choice about whether or not to do something that is truly optional, Pamela strengthens her sense of self, which, in addition to trust, is another important ingredient for relationships.

It is easy to forget the importance of relationship in focusing on objectives. Yesterday, in anticipation of a rare snowfall Friday night and of painting a landscape with a barn on Tuesday, I found a way to do a double preview: we painted a snow-covered barn based on a picture from Eric Sloane's The Seasons of America Past. We had two sweet moments I captured on film that have nothing to do with my objectives. They may seem like nothing, but anyone who has spent time with an autistic person trapped in monologues on topics that only interest them will appreciate how miraculous moments like this are! 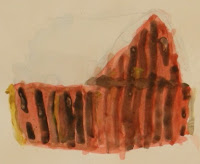 Here are three more examples of Pamela paying attention to me unprompted, without any demands that she interact with me, thanks to the hard work we have been doing in our RDI program:

Love it Tammy!! I especially loved how you were able to let go of having the brownies done ( perfectly) for the sake of discovery!!!! :)

That is one of the things that I am just learning to do...let kids (especially autistic, but all kids) do things on their own, even if it is not perfect. Bravo to both of you!
BTW Pamela is quite a talented artist!
-Phyllis

While Levy made a great point here, his explanation of how to teach eye contact is not anything like what we do to teach referencing in RDI. (Hat Tip: Penny).

I love how you gave her time and space to work through the brownie dilemma! This is a marvelous post.