A couple of weeks ago our consultant figured one reason Pamela speaks in power words (one or two meaningful words). She responds so quickly that she has no time to formulate more elaborate sentences. Amy suggested we find a way to slow Pamela down by pausing three to five seconds before I speak and encouraging her to listen, process, and think before she speaks. I recalled an idea shared by Julie B in which she passed around a ball to signal whose turn it was to talk. I decided a more expedient way would be to hold a pretend microphone, withholding it long enough to build think space. As we progressed, I found the following elements helpful in scaffolding Pamela:

The video below represents our first attempt. Even though it looks (and felt) awkward, Pamela formulated much more meaningful communication once we slowed her down. The different between her immediate response and her thoughtful response is quite striking! I loved how Pamela leaned into the microphone as if it were real. 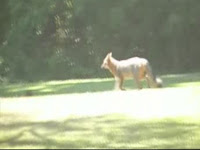 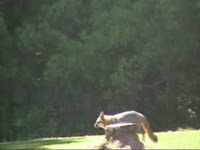 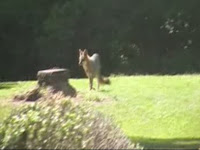 As we have worked on this consistently for the past two weeks, we have relaxed more in our conversations. Since meals on wheels provides so much "scope for the imagination," it afforded ample opportunities to work on this objective because so many unpredictable things happen. If you don't believe me, check out the pictures of the fox I pulled of the recordings I made during our delivery!

The first novelty was having more items than usual to grab: five instead of three. I wanted to comment on the animal statues after the first place, so I stopped. Pamela kept heading to the car but caught on fairly quickly that our paths had diverged. Then, we read a note and had to alter our usual actions. Before we made it to the third place, we saw an airplane AND a gray fox (the real deal, not a statue). We talked about hearing a rooster (happy emotions) and then talked about a dead dog (sad emotions). We noticed the new house being built (an old house had burned down awhile back). Then, we discussed the great grandbaby visiting one of our folks. We talked about a cat sitting on the porch of the cabin where one very poor woman lives. It was almost time for lunch, so we talked about that. Pamela sneaked a mint out of my purse, more fodder for conversation. We also noted the horrid construction on the roads, while we were waiting at a light.

The new issue is Pamela's tendency to say, "Right, right" or "Yes" when she agrees. Yes, we have a plan for teaching her to elaborate when you agree or disagree . . .
Posted by walking at 08:19