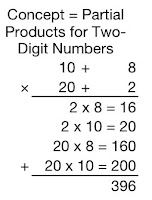 Making Math Meaningful introduced two-digit multiplication through partial products but differently arranged from the illustration on the left. Once my children had internalized the concept, they learned the traditional algorithm most of us learned. To this day, when Pamela verbalizes such multiplication problems as she works through the traditional algorithm, she says, "twenty times eight" and always gets it right. My children transitioned really well from one method to the other.

Mathematics educators debate memorizing procedures and facts versus understanding concepts in a way that reminds me of the sight reading versus phonics debate. My children needed both sight words and phonics to read well. I think the same applies to the math wars. This video is an example of the anti-partial products crowd. I spotted a couple of fallacies. While the academic sort of kid may pick up on the traditional algorithm, those who need a more intuitive conceptual way get bogged down in a problem like this because they forget that they are not multiplying 2 x 8, but 20 x 8. Even though the presenter explains that, it is easy forget unless you have not learned "partial products" first. Last week, I was helping a fifth-grader with his homework. The traditional method confused him because he didn't know where to put the carried number. He told me he knew another way and quickly came up with the solution based on the partial products method without any hesitation and finished the rest of his problems without asking any more questions.

The presenter complains about finding "the bits" confusing but she wouldn't if she had learned partial products in the way my children learned, which smoothed the way to the traditional algorithm. Many things are evident in the problem on the left. (1) We carry the one because it is in the tens place and needs to be added there. (2) We write the zero in the second line because we are multiplying by 20, not 2 (it is easy to forget that, if you learn the traditional algorithm off the bat).

The placement of zeroes became evident even for tricky problems like 75 x 23. Kids who lack a good memory or mastery of the concept get tripped up after multiplying 5 x 2. A student trapped in rule thinking squirms over whether or not they should write two 0's or one if they forgot they are really multiplying 20 x 5. Partials make it evident that you put down 00 rather than 10. 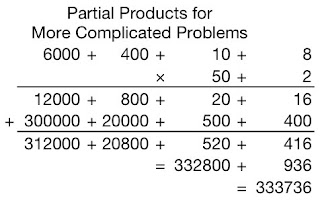 Of course, the traditional algorithm really is more efficient, especially when you hit larger problems. However, by this point, most students may have already shifted to the traditional method. For a child who struggles with internalizing procedures that are not evident, this may be the most efficient way for them. I believe both ought to be taught because having multiple strategies helps children understand that there is more than one way to solve a problem and gives them a backup when they waver over a problem. 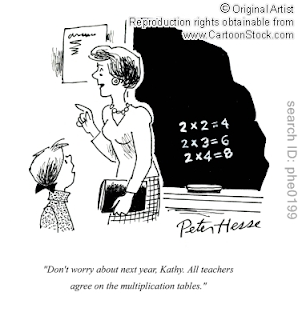 If you continue on through the video, the presenter covers long division which has stumped Pamela as I discussed yesterday. She just doesn't wrap her head around starting on the left with division with every other algorithm starts on the right. Only one day of trying "partial quotients" worked like a charm. While long division is more efficient, it is not very effective for someone with a mental block against it. I concede the presenter one point: relying too heavily on calculators becomes a crutch if children have not mastered the basics. She will get no arguments from me on that front.

In his article on mathematics, Daniel Willingham spends a great deal of time trying to prove that humans are hard-wired to perceive the concept of number and the sense that numbers and space are related. The point of his assertions is that people who "can't" do math really can under the right instruction. He suggests the three essential ingredients for learning mathematics: factual (knowing your times tables), procedural (the traditional algorithm), and conceptual (why the traditional algorithm works which is more evident through partial products). You really need all three to be not only efficient and accurate in math but to understand why you are doing it and how to think through problems for which you have never learned an algorithm. I have tutored many people in higher level math and Willingham's comment describes the biggest problem I see,

If students fail to gain conceptual understanding, it will become harder and harder to catch up, as new conceptual knowledge depends on the old. Students will become more and more likely to simply memorize algorithms and apply them without understanding. (Page 18)

Recently, a friend emailed me for help in her psychology statistics course. She was close to failing the class, which would have ended her financial aid. She lives in another state, so we faced the disadvantage of discussing statistics by email. When she described her issues, I realized my friend knew the facts and procedures but was totally lost on the concepts. She had no idea that ANOVA (analysis of variance) was a way to assess how closely a line drawn through a bunch of points. Okay, don't worry if that lost you. But, folks that is a big piece of the puzzle to be missing. I found some neat little java applications and flash programs on line and recommended a couple of videos from Khan Academy (thank you Yellow Rose Jenn for that tip). We exchanged a couple of lengthy emails on the concepts and I answered her questions. She told me that it blew her mind how everything started to make sense once we put some critical concepts into place. Two weeks later, I looked at her practice final and only found a couple of the conceptual questions wrong. She told me she had no idea and guessed on those. So, we talked about the concepts behind each question to help her understand them.

So, how did she do? She got an 87.5 on the exam. At first, she thought the professor had given her the wrong test back. But, she really did it. She passed. My friend told me that, if we had started the intervention sooner, she might have even earned an A.

Miracles can happen when you fill in a couple of huge gaping holes in understanding.
Posted by walking at 07:59

I want a hotline to be able to talk to you when we get to some of these mathematics concepts, just in case...

You should and could!
Excellent blog. I put a link out to the CM crowd!