The Bounty of the Outdoor Life

A variety of commitments have kept me from blogging. I have a little breathing space and yesterday's episode of the outdoor life gave me something worth sharing. Even though we've not homeschooled much in the past two weeks, we've made time for nature study. One can't help it with all the beautiful things blooming and the unpredictable weather.

This week, my heart has been turning over Carroll and Andy Smith's post on nature study and how to live it.


Education, including Nature Study, as Mason told the young lady whom she interviewed to attend her college, is about living. I have thought about it and I have asked myself the question, “Are these (mentioned above) ways of teaching Nature Study more about “doing” Nature Study weekly or are they about “living” Nature Study. We are to develop the habit of living fully and part of that living is relating to nature and knowing the places where we live, not just doing activities, even Mason inspired ones!"

Ouch! Even the best of intentions can end up focused on doing rather than being, especially during busy times like this past month! 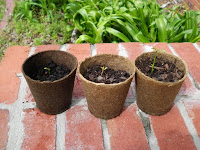 I told Pamela I was heading out to do nature study, but I didn't tell her to join me. I wanted to see if she would come on her own initiative. While she was wrapping up whatever she was doing on the computer, I was outside, painting wisteria shoots. While we planted seven seeds at the same time, three have sprouted and emerged, one by one, and they illustrate stages of shooting up. I wanted to capture the differences a few days makes. The thought occurred to me that even seeds remind us of something about child development: it happens at their own pace and in their own time, no matter how much we yearn to rush it. By the time I began my notes, Pamela was sitting on the brick steps with me, admiring the seedlings. 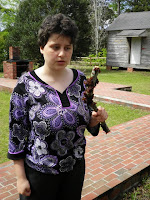 Last night, a storm blasted our town, knocking out power for five hours, which killed our elderly algae-eating fish. Today, we found pieces of pecan branches on the ground. I picked them up and noticed a jelly-like fungus that I later learned goes by many names Auricularia auricula, wood ear, cloud ear mushroom, Judas ear, and a few others I bet. The fungus intrigued Pamela, and she began picking it off the branch. It almost looked like a cross between a golden raisin and a dark raisin after being soaked in water for a few hours. Pamela didn't seem to mind the squishy texture one bit! 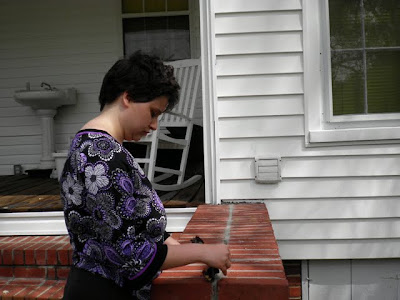 For the past few weeks, I've been trying more "sight-seeing" with Pamela. By "sight-seeing", I mean looking around for something outside that is small and within reach and studying it carefully enough to supply a detailed description (pages 45-48). This activity trains observation skills and expressive language and builds vocabulary. Just like picture study, Pamela spent a few minutes observing the attributes of the fungus, knowing a narration will follow. 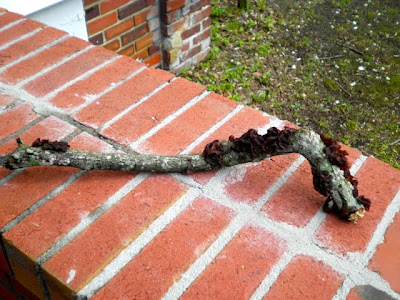 When she was ready, I asked her to turn around and narrate a description from memory, which I recorded in the video below.I noticed a couple of interesting things.
Pamela sat down to draw the wisteria, and then she began writing. My jaw dropped when she asked me how to spell fungus, a word that isn't a regular part of her vocabulary. Her easy recall of a fairly unfamiliar word pleasantly surprised me--aphasia gets in way of even well-known words.

A thought struck me that the outdoor life’s bounty provided therapy for her as I alluded to in my ChildLightUSA blogpost called Rethinking the Culture of Therapy. Picking off the fungus worked on her fine motor skills, the domain of occupational therapy. Learning a new word in a contextualized way and expressing what she saw verbally was speech therapy. Touching this squishy gooey stuff—something she could not do fifteen years ago because of her tactile defensiveness—falls under sensory integration therapy. Anyone who has purchased materials for a sensory diet knows how expensive that stuff can be, and the outdoor life offered it for free! Keeping a nature notebook is an artful blend of science, language arts, and art. 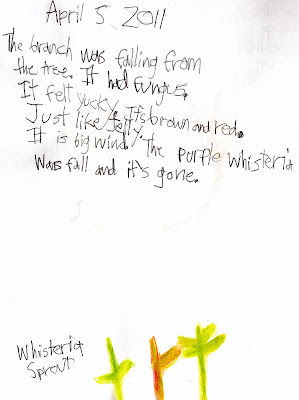 If the child is left to himself he will think more and better, if less showily. Let him go and come freely, let him touch real things, and combine his impressions for himself, instead of sitting indoors at a little round table, while a sweet-voiced teacher suggests that he build a stone wall with his wooden blocks, or make a rainbow out of strips of coloured paper, plant straw trees in bead flower-pots. Such teaching fills the mind with artificial associations that must be got rid of before the child can develop independent ideas out of actual experiences.
~ Anne Sullivan, May 8, 1887

Thank you for sharing your insight. I look forward to following future posts and peeping into the past. I am most curious about the schedule Pamela sees. I saw your own colored "plan." Does Pamela refer to that as well, or does she even see a plan?

We use our schedule as a guideline, more like a checklist. I print it out in black and white and she highlights things as we finish. Some days we work in no particular order, but others she choses books by chronology, working from B.C. to modern times or the other way around.

Lately things have been so hectic that our days are more hit and miss. Fortunately, RDI has helped her become much more flexible in her thinking.

I wondered where you were!! :) I really enjoyed reading your post and am now going to go back and click on your links!!
Best wishes
Di