The Proper Care and Feeding of Worms

In the past few months, I have touched on our vermicomposting experience. I had blogged more posts on worms in my head, and now I will share them with you. Yeah, it's been busy.


Here is how the worms looked on the first day they arrived. You cannot see them but they are there. 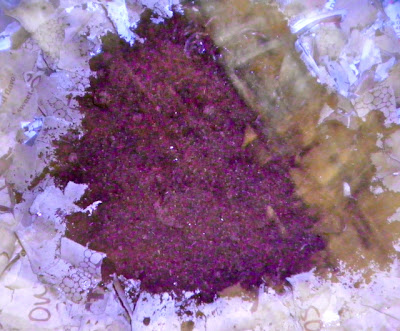 Here is a photograph of them today. 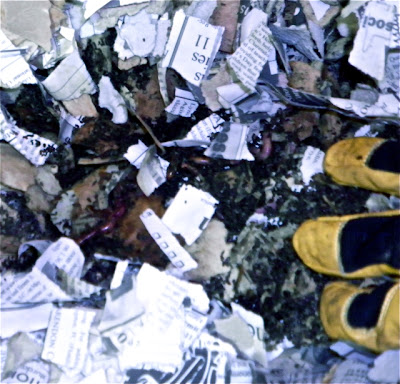 Every once in a while, we pull off the top layer of bedding and study the worms. Pamela has made two entries in her nature notebook so far. 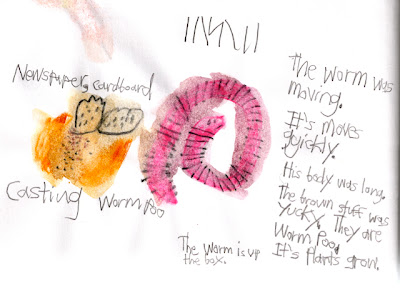 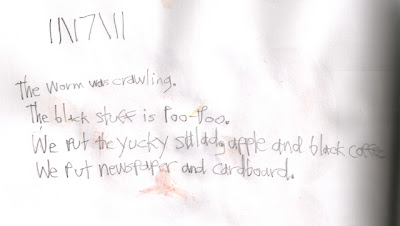 Worms are more low maintenance than I expected if you keep in mind a couple of tips. I keep them in the laundry room with the light on at all times. They have a habit of trying to escape before they become accustomed to their new surroundings. We occasionally have a small outbreak of fruit flies, which I deal with in a natural way: (1) put a thick layer of bedding on top of the food and (2) keep a dish of cider vinegar mixed with dish soap near the bin (the vinegar attracts them and the dish soap traps them). I feed them only once a week and left them unattended for ten days when we went to Kansas. I am not sure how long is too long. January is the earliest we can harvest castings, but I can tell you we are already seeing a solid amount of black gold for the garden.

Since Pamela has learned quite a bit about worms through first hand experience, I picked the topic of worms for her nature study exam. Exams in a Charlotte Mason style of education are stress-free. All Pamela needs to do is tell me what she knows about worms. A couple of times I follow up with questions designed to let her narrate what she knows but has not thought to share with me. She did a lovely job of narrating what she has learned about vermicomposting this term.

This video illustrates the nature of aphasia well. Sometimes, Pamela speaks in full clear sentences. At other times, single words pop in her head. One thing that has really opened up her confidence, even when semantics and syntax are lagging, is what I learned from Relationship Development Intervention: keep a slow pace and give her time to think, avoid the temptation to correct her all the time, rephrase what she says with no pressure for her to repeat, encourage nonverbal communication, etc. In fact, following these three tips in communicating with a person with autism can forever change their ability to communicate back.

I love the ending when she says, "Feel happy," and kisses me on my arm. How many teachers do you know get kissed after an exam?


The worm was wiggling. It had small head, and it's eating foods. Worms had a hole. Go in. Worm's head doesn't have holes. Holes on the box. We have bananas. Yummy! Box, dirt, poop. Poop look yucky! BROWN POOP! It has dirt yucky. It's pink line. No legs. Get ready for the food and box. Paper was ripped: the bags, papers, white paper, newspaper. They set up the home. They get the new worms from the mail. Feel happy.

Great post! Forgive me, I couldn't bring myself to watch your video clips..... there is just something about worms that make my skin crawl!

Perhaps, I should put a warning label: do not read while eating lunch, especially if you are having spaghetti! Setting up a compost bin fosters many opportunities for occupational therapy with all the shredding of paper, cutting of food scraps, spraying water, putting holes in the bins, not to mention language development, relationship development, and the obvious thing: science.

I’ve been surfing online more than two hours today, yet I never found any interesting article like yours. It is pretty worth enough for me. In my opinion, if all site owners and bloggers made good content as you did, the internet will be much more useful than ever before.