Sometimes, trying to visualize what Charlotte Mason meant in her writings is difficult until you see them in action. Some of my favorite moments are when her ideas come to life in the form of homeschooling Pamela. For example, sitting at the Nelson-Atkins Art Museum, watching Pamela record artifacts into her book of centuries last month filled my heart with joyful tears. Other moments come from grand conversations that come from living books such as the time we talked about culinary horror stories triggered by a paragraph in The Brendan Voyage. Or the day when we were sitting on the back porch rockers making a nature notebook entry and a lone monarch butterfly flashed into the corner of my eye. I could go on, but I won't bore you. Another sweet example that has been emerging all last year brought this passage to life.


[Let me] conclude with a wise sentence of Coleridge's concerning the method of Plato, which should be always present to the minds of persons engaged in the training of children:––

Plato's Educational Aim.––"He desired not to assist in storing the passive mind with the various sorts of knowledge most in request, as if the human soul were a mere repository or banqueting room, but to place it in such relations of circumstance as should gradually excite its vegetating and germinating powers to produce new fruits of thought, new conceptions and imaginations and ideas." (Page 125)

What exactly did she mean?

I think about how children "learn" today. Adults pour facts into passive minds and students regurgitate them upon request until they is no longer requested and new facts replace the old ones. True learning of knowledge begins to germinate new ways of thinking. Some ideas are like beans and they sprout very quickly. Other ideas must age for a long time like tropical seeds before they germinate and eventually bear fruit. Last year, I noted Pamela's fascination with gorilla toenails after she studied a picture in a book we were reading. A new conception in her mind, that gorillas have toenails and fingernails like her, has born fruit all year long.

At first, Pamela talked about gorilla toenails a lot. Then she shifted to other primates with nails and eventually other mammals. In time, she shifted to claws, then hooves, and recently webbed feet. She also came up with a category called nothing for creatures like snakes. Today, I thought she might enjoy recording these conceptions that have been percolating in her mind for the past year into her science notebook. She loved it. Pamela drew the vertical lines and set up her categories. She came up with so many animals with claws that she had to write on the backside of the page. When she thought of salmon, Pamela realized she needed a category for fins. Later, she added flippers since they seemed to fit together. She remembered talons and I had to look up the exact difference between talons and claws to help her classify. Tentacles popped into her head for another category. 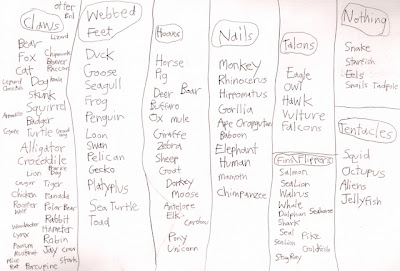 During this process, I noticed many interesting things about how Pamela's mind works. She thinks very flexibly. After she focused on one category and ran out of ideas, I would come up with an animal in a different category. She easily shifted somewhere else and often shifted on her own. Once we went back to reading, her mind pondered some more and she was able to "hold that thought" until we finished the book. While I grabbed another book, she recorded new animals. She cares enough about spelling to ask for help but doesn't obsess if something didn't look quite right. When she realized she put an creature in the wrong category, she simply erased it and corrected her error.

Pamela's knowledge of animal names and body parts are wide and varied. She came up with some obscure animals like grackle, anteater, pike, lynx, and platypus. She came up with extinct animals like mammoth, dinosaur, and dodo. She even included imaginary animals like beast, dragon, monster, and unicorn. You might be wondering why she put aliens under the category of tentacles. Here are three reasons: (1) Kang and Kodos, (2) Galaxy Quest, and (3) A Wrinkle in Time.

Now, if your "take away" is to create a worksheet or lap book for your kid, then you are missing my point! Pamela enjoyed this process because her mind had been chewing on categorization based upon feet for the past year. One small idea led to her mind being tuned into putting her thoughts into writing.

The hard part for teachers is the art of stepping aside, waiting for seeds to germinating, and guiding the child into meaningful expressions of them when the new conceptions are bearing fruit.
Posted by walking at 22:21

This is just what we experienced regarding geography. Last year I broached the subject of learning the names of the states using a fun music CD that our nieces had enjoyed. We had already been using the idea of bringing out the map or globe whenever we started a new book. Tim resisted so I put it aside. Then in the spring we took an Amtrak trip to Iowa. Tim became interested in the states we traveled through, looking at the travel map and talking about it often. When I brought up the idea of learning the states again, he was very interested and geography became a favorite subject! The next step for him was really fun. He likes trains so he thought of the idea of using the capitals of the states as the names in the states song instead of the states' names. All of the motivation for this was internal and was really fun to watch!

This is a wonderful way of distinguishing real learning, which is fruitful and branches off in various directions, from rote learning. I'd never thought of it exactly that way before. Your blog posts always stimulate my thinking! :) By the way, I loved A Wrinkle in Time when I was a girl.

Here is another example. We are reading a book on an invention featured at a centennial exhibition in Philadelphia. Since Pamela already has a keen awareness of inventions and their time, I had her make the following lists in her science journal: 1776-1876, 1876-1976. Two days later, she asked, "What about 1995?" So I had her go to the other side of the page and asked, "What should you write?" She thought for a moment and put, "1976-2012." I wasn't sure if she would use 2012, a question mark, or 2076. It is wonderful to see her think and take something to the next level.

I so enjoy reading about Pamela's progress. I am overawed at her dynamic thinking. Looking at your photographs, I can also see how her style of writing has improved over the years. Her force of pressure on the pencil has become more definite and the order in which she records her findings seems to be more specific.

The funny thing is that she continues to review her list: (1) we have an ongoing discussion on whether trolls have nails or claws, (2) she added tapir, and (3) she researched flamingo and found out she was wrong so she corrected the entry.

And the latest twist after watching more of the play Julius Caesar: "Brutus has bloody fingernails."

I simply loved reading your account of Pamela's interest in toe nails etc. I thought to myself this is real learning.Something she will treasure her whole life. I so much agree with you that we as teachers need to get out of the way and let them learn. Thanks for posting this.

Pamela has just come up with a new thread to record in her science notebook: names for male and female animals. :-)