A Full Life in the Real World

Charlotte Mason warned against creating an atmosphere so sweet that children crumpled in the face of adversity. She believed children must face life as it is through household ways with the family and relationships with people from all walks of life. In her analogy of a hot-house plant, she quoted a scientist from India, Professor Jagadris Chandra Bose.


A plant carefully protected under glass from outside shocks looks sleek and flourishing but its higher nervous function is then found to be atrophied. But when a succession of blows [electric shocks] is rained on this effete and bloated specimen, the shocks themselves create nervous channels and arouse anew the deteriorated nature. (Pages 95-96)

Bringing her recommendations to fruition is quite difficult when raising a person with autism. They are born with highly sensitive sensory systems that react to the smallest change, minor sounds, and even the softest touch—princess and the pea on steroids. We create environments that prevent them from melting down, or face tantrums. Setting up slightly challenging situations in public sometimes lead to ugly scenes at WalMart, and disapproving looks (and bad advice) from anybody and everybody. If we protect our children too much, their world becomes more narrow and their lives become more atrophied.

Throughout the years, we have found ways to encourage Pamela to experience new things and different people. The other day we read about the first candy widely embraced by Americans in 19th century: mint candy. I bought some mint leaves. Pamela whipped egg whites, dredged a leaf in the egg white, rolled it into sugar, and placed it on waxed paper (in this case, the recycled liner of a cereal box) to dry. This activity was worked on our relationship skills by taking turns coordinating our actions with each other. It also challenged her ability to integrate her senses. Foamy, sticky stuff puts anyone with tactile defensiveness into red alert. When the ickiness grew too much for Pamela, she headed to the sink to wash her hands.

After the candy dried, we had our taste test. Steve said the candy tasted like tic-tac's (minus the unreadable chemicals). Before she took a bite, I asked Pamela what she expected. She beamed and said, "Junior Mints." Then, she chewed on the candy (well the leaf because the sugary stuff melts in your mouth). The expression on her face reminded me of a baby eating spinach for the first time! I asked her what she thought of the candy. Pamela answered "Great!" but I don't think she meant it. Yet, another opportunity to let her senses experience something outside daily life. 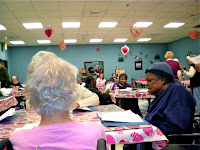 Volunteering to deliver meals on wheels has enabled Pamela to get used to seeing elderly people from all walks of life. She meets all sorts of people with all sorts of special needs. Some take forever to reach the door, and Pamela has learned to wait patiently. The last time we delivered a meal a man who seemed to have autism and cerebral palsy waved to her and called out, "Hey, girl! Hi!!!!" And she waved right back and greeted him in the same way. On the Sunday before Valentines, I joined the kids in the afterschool program for a Valentine's Day Party at the nursing home. The kids had made a bunch of cards to share with people. I gave Pamela a choice to stay home, but she chose to come with us and even gave a card to a lady in a wheel chair. 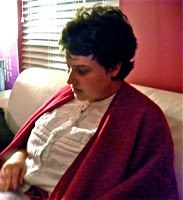 In January, some dear friends invited us to a Twelfth Night costume party. The day before we hit the thrift store to find clothing that barely passed for clothing in the era of Dickens. We drove three hours and arrived just as the party was getting started. Pamela had never seen most of the families in attendance. Yet, she chose to participate in several things. She tried to learn all the steps in Jacob's ladder, which was well beyond her level of competence for fine motor skills. Pamela went outside in the dark with the large group to a nearby cul-de-sac, where we played a game none of us had ever played: bad egg. After she sat still long enough to have her silhouette made, Pamela retired to the family library and quietly browsed through books. 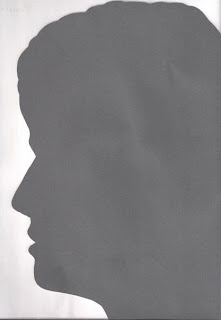 We continue to see signs of Pamela's ability to thrive in the real world. The other day, McDonald's made a mistake in her unusual order (a hamburger happy meal with no bun and no cheese, coke with no ice, and an extra order of small fries). We drove off before grabbing the soda. Instead of freaking out and making me drive back around, Pamela calmly, yes, I really mean calmly said, "Oma has coke." We were on the way to my mother's house and she tries to keep soda in stock for Pamela. Not only that, Pamela is more and more able to have conversations with my parents without me interpreting for her. The other day, Mom was talking on the phone with a friend. Right after Mom said, "We will be out of town then," Pamela flew into the room and demanded, "Where are you going??????" She has become quite the dropper of eaves. 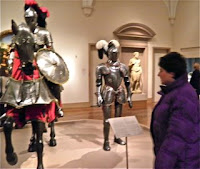 And, when we travel, we find all sorts of interesting things to do. We have made two trips to Kansas and have made two trips to the art museum: one focused on Impressionists and the other on Ancient Egypt. She also tried Thai food and visited the American Jazz Museum, the St. Louis Arch, the Cosmosphere, and the Combat Air Museum. On several walks on brisk, chilly days that whipped our hair, we heard the wind whistling through prairie grass, the water trickling down Independence Creek where Lewis and Clark picnicked, and hundreds of Canada geese resting at a lake. Pamela even touched a scrap of metal from the USS Arizona and walked inside an earth lodge, quickly spotting the anachronistic fan on the wall!

What a full and lovely life you have given her.

Stunning post!
Any chance you can adopt Nick for a few years and sort him out? He is sweet and gentle (only pinches when cross!!). :D

Well Tammy and Pamela, this is just beautiful. What a beautiful and amazing life you both have. Brought a lot of tears to my eyes and I see so much of my daugther and myself in your words. Just beautiful.

It's encouraging to see a glimpse into your full life with Pamela. I enjoy reading about it!

You are so proficient at giving her just the right amount of challenge. I really struggle with this with my Aspergian daughter.

YOu have had a fabulous year !

A wonderfully inspiring post! I've been googling high school plays and other such activities in hopes of taking Ian soon. We need to get out in the world too.

I have often visited your blog and must say that you are a wonderful teacher to your daughter...I am always full of ideas after reading your blog. Thank you

Di, you are too funny. Nick is blessed to have you for his mum as are all the kids of my friends and fellow aut-moms posting here.

Beth, "Remember what Bilbo used to say: It's a dangerous business, Frodo, going out your door. You step onto the road, and if you don't keep your feet, there's no knowing where you might be swept off to.”
~ J.R.R. Tolkien

Thanks, Þorgerður! How encouraging to know someone so far away is benefiting from our life in rural Carolina. :-)

tammy! you are so good with her! i'm sure that she has learned so much from your patient and creative teaching and really seems to benefit from such a truly full life! i am so super glad you blog about it too! it is soooo helpful to so many. your experience is such a resource!! thank you!