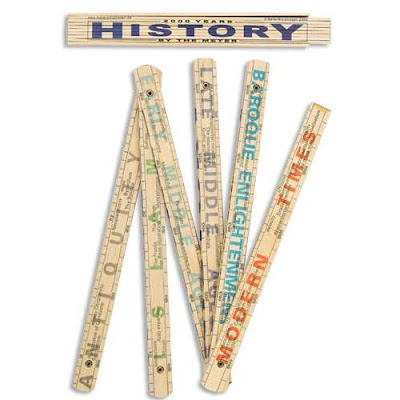 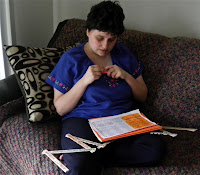 A friend who studying Charlotte Mason's sixth book with us in our little homeschooling group is married to an airline pilot who occasionally spends time in London. Sometimes, he visits the British Museum. Yes, THE British Museum--swoon! My friend of the Raptor in My Prius fame was so sweet: she asked him to pick up a gift for our family. They gave us a History by the Meter measuring stick. Truly, a perfect item for us. Now, before we pick a book on the schedule (the paper with orange highlights), Pamela says, "I'd like a book from Modern Times."

"So, what's the big deal about the British Museum" you ask? You shouldn't have!

Charlotte Mason's journal, The Parents' Review, published a series of articles about the contents of the British Museum, the eventually became a book, now available online. Students in her schools and homeschools read this book to inspire them: "Whether the children have or have not the opportunity of visiting the Museum itself, they have the hope of doing so, and, besides, their minds are awakened to the treasures of local museums" (Page 176).

In a letter to Mason about a trip to London one mother commented on the kind of inspiration she witnessed in her eleven-year-old child: "She also expressed her anxiety to make acquaintance with the British Museum and see the things there that they had been 'having' in their term's work. So the next morning we went there and studied the Parthenon Room in great detail. She was a most interesting companion and taught me ever so much!" (Page 77)

We are enjoying spring break in Kansas, so Pamela and I headed to *our* British Museum, the Nelson-Atkins Museum of Art. Our first visit reminded me that "less is more." The second one taught me the joy of focusing on a few things and studying them carefully and of having a book of centuries on hand. Our third visit showed me how relationships play a part in this.

My junior high class took a field trip to the Art Institute of Chicago. Two memories have stuck with me a few decades later. George Seurat's ability to transform dots into beauty amazed me in his painting, A Sunday on La Grande Jatte. He was so far ahead of his time in prefiguring the concept of pixels, which are so vital in computer graphics! My enthusiasm for Impressionists began that day. The other memory is staring at one of Jackson Pollard's dribbles and wondering why people considered it art. Just trying to be honest here! Whatever else we saw and heard that day evaporated from my mind. Although we were happy to escape the classroom for a day, what Mason wrote of field trips as "the act of pouring information down the throats of the unhappy children who are taken to visit our national treasure houses" rang true for us.

Mason focused on self-education and reflecting upon what is already known: "It will be noticed that the child is educating herself; her friends merely take her to see the things she knows about and she tells what she has read." For that to happen, children must read wide and varied books. The relationships Pamela and I have formed with what we read in her books have guided our focus at the museum. On our first visit, we focused on artists that we already knew (Monet and Millet) and we previewed one we were on the verge of getting to know (van Gogh). Our second visit concentrated on readings we had been doing on ancient art (architecture, sculpture, and painting) plus our ancient history book. 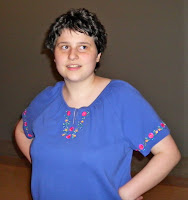 Our first stop was to our dear friend Monet. His spectacular panel of water lilies was not available during our last visits. Before entering the room, I told Pamela I had a surprise for her: a painting by Monet that she had never seen. Her expression is priceless, and one of my friends on Facebook noted, "To see this art through Pamela's eyes is pure joy!" You can see the blaze of admiration in her posture in the picture below. 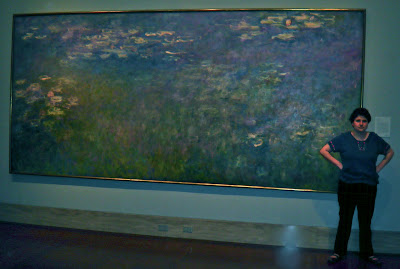 In one of the hallways of the museum, we found this display in which you could actually feel what the brushstrokes in a painting of water lilies might feel like. The left end is canvas with a foundational color. As you move toward the right, the canvas slowly transitions to water lilies and their bold lines of color.

Between a children's biography and picture study, we have spent an entire term studying van Gogh and his style of color and brushwork. We learned about how different his early work on the right (Portrait of Gijsbertus de Groot) and his later work on the left (The Olive Orchard). Van Gogh lived in the coal mining region of Holland and painted a series of somber pictures and sketches in thick black charcoal to reflect the mood there. The painting of Gijsbertus has van Gogh's characteristic bold strokes but lacks the color and frenetic energy of his later paintings. Apparently, as van Gogh got closer to the time of his death, he impatiently painted as if he knew the end was near. He didn't bother to mix the colors and his brushstrokes jump at you. When I examined the trunks of the olive trees in the French orchard carefully: I noticed how the bark is made primarily of blue and green streaks with blocks of orange and black for highlighting and shading. The cream-colored and sage green chunks in the pathway looked good enough to eat. Van Gogh's haste makes the trees quiver and the path shiver with life. 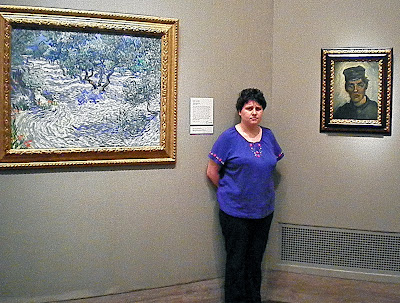 No tour guide, placard, or audio blip told me what to seek in van Gogh's work. At the museum, I found things I already knew and I am sharing them here with you. 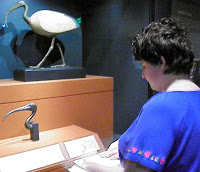 We left the world of Impressionism and traveled back in time to the ancient world. Because Pamela had already made several entries about Egypt, she chose to draw the bronze and wood sculpture of the ibis (one of the animals the god Thoth liked to inhabit). Only last week we read about how Thoth was the god of wisdom and taught the Egyptians their arithmetic, writing, etc. However, I think Pamela was more interested in learning that ibises have claws, not webbed feet. 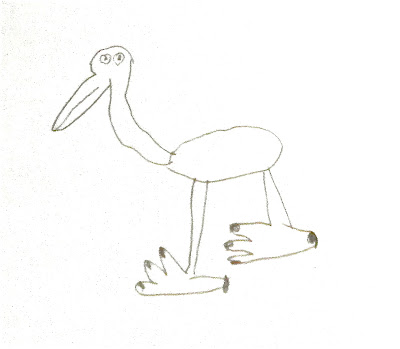 We took a brief rabbit trail into literature on our way to our next stop (Greek sculpture). We found a bust of the Emperor Hadrian, who built the wall that plays a major role in a chapter we started two weeks ago. We also spotted the centaurs done in relief on the base of a Roman sculpture of a boy. Just last week, Pamela had commented when we read about Hercules killing some centaurs in The Wonder Book, "Just like Phidias." Yes! Phidias just rolled off her tongue and nearly knocked me to the ground in surprise and delight. Last week, we wrapped up our study of Phidias and the relief sculptures of centaurs in battle on the walls of the Parthenon. Once she saw a centaur up close and personal, she told me it reminded her of Narnia. 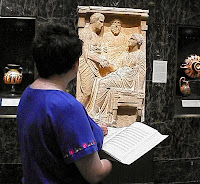 The museum's collection of Greek pottery (studied on a previous visit) is more extensive than the object of our interest in this trip: Greek sculpture. Pamela settled on this grave stele of a father and his two children. Pamela enjoys drawing animals and geometric solids far more interesting than people, which is why I think she gave up on the daughter. 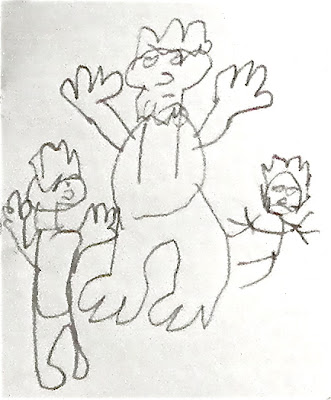 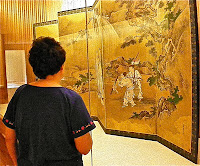 We finally made it to the second floor on this visit, which houses collections of Asian and North American items. One cannot cover an entire museum in a day without losing one's mind. We chose to visit the Japanese room because we started a book about 19th century Japan a month ago. I loved the look of the warm wood and a sparse collection of objects, which communicated elegance and tranquility to me. We wandered around exploring everything in the room and finding things that reminded us of the book we are reading. 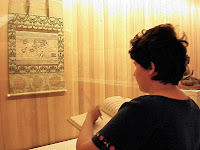 Pamela finally settled on copying a few samurai warriors into her book of centuries. When we left the Japanese room, we saw something that nearly took our breath away: a spectacular suit of armor for a samurai. The most curious aspect of this armor were the shoes, which reminded us of fuzzy, black bedroom slippers. The helmet captured our attention between the golden crest on top and the black lacquer face mask with strip of fur that made it look more fierce. The armor was made in the 17th century during the great peace in which Japanese art flourished. 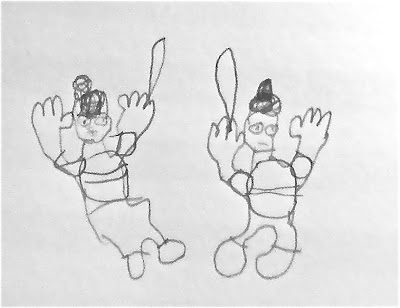 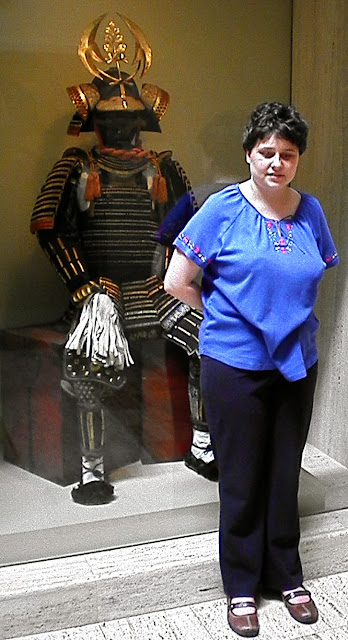 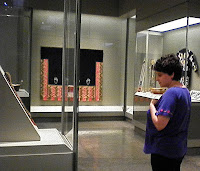 I had no plan in mind when we stumbled into the Native American room, but Pamela did. She started looking for any artifact from Wisconsin, the setting of a book we are reading about a family from the Ojibwa tribe. While we didn't find anything from the state she was seeking, we did find this coat made out of buffalo from Ontario. Pamela smiled, rocked, rubbed her face, and clasped her hands—all signs of extreme joy. I love how she turned this impromptu visit into a treasure hunt! 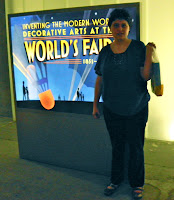 We didn't escape the bookstore without purchasing a supersized, overpriced book that captured Pamela's heart. I consoled my grief at being hoodwinked into this impulse purchase by deep cleansing thoughts. The book is "avishly illustrated and encyclopedic in scope" according to the Amazon review. It supports a good cause (our favorite museum). I would have paid an extra $15 in shipping and handling anyway. I only bought a postcard of water lilies for 75 cents, so everything balances out. I didn't have to pay for Starbucks because I remembered the gift card...
Posted by walking at 23:59

Email ThisBlogThis!Share to TwitterShare to FacebookShare to Pinterest
Labels: Book of Centuries, science of relations

You did well with that book choice!
Loved this post.
It made me want to go to a museum.

WOW! I am so impressed with everything you are covering. My 7 yr old son unschools. We love visiting museums and -always- I am hoodwinked into buying something.
Because it's educational. I have hopes that we'll be able to stop and study the art like you are - maybe even *draw* something.

Bonnie, Pamela has an eye for books, no doubt about it.

Brenda, our aim is to build relationships and know rather than cover. That is the beauty of slowing down and savoring books and museum visits, bit by bit, rather than trying to gulp one huge drink. Pamela took her first baby steps in drawing when she was about eight years old.