The Royal Road to Romance

Whenever we travel, even if the trip is taking us from one place to another, we like to make memorable stops. On the way home, we visited our third Laura Ingalls Wilder site: the home that Manly built in Mansfield, Missouri. We visited a replica of Laura's house in the big woods (pictured left) when we lived in Minnesota (Laura Ingalls Wilder Day in September 2003). Last April, we saw a replica of their small cabin on the prairie (Independence, Kansas). This time, we were seeing the real deal! 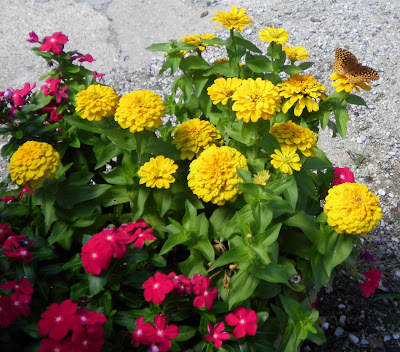 On the way to the museum, a friendly Great Spangled Fritillary greeted us. It rested on these marigolds near the trashcan, so I had to snap a picture and submit it to Butterflies and Moths of North America for identification. David called me "Taylor Swift," and can anyone tell this out-of-touch mom why? 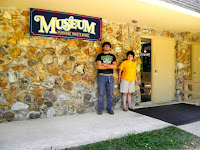 We entered the museum and, to my dismay, taking pictures is forbidden! Ug! I was tempted to head back to the car for Pamela's book of centuries, but the weather was hot and time short. Then, Richard Halliburton whispers in my ear, "Do it! Just sneak in a few pictures. It's worth the prison time." Unlike Halliburton, I am a mom with two grown kids, trying to set a good example. So I ignored him.

Who is Halliburton, you ask? He was a prolific traveler and writer who packed twenty years of adventures into a brief life, cut short by one of many ill-conceived plans (died at sea trying to sail across the Pacific in a junk in 1939). While the thought of blue-haired ladies at the Laura Ingalls Wilder museum and home stopped me in my tracks, Halliburton cheerfully did time in a British prison on the rock (as in Gibraltar) for his illicit photos taken at their military installation. Yes, signs were posted everywhere and he blatantly ignored them all. His time in the slammer was so endearing that he generously offered gifts as explained in his letter to the Gibraltar Military Censor,


As a memento of the tempest you raised over this teapot affair, I am enclosing twelve excellent photographs of your picturesque fortress, the negatives of which I saved from the gentle treatment accorded their companions. Realizing how rare such pictures are as these are, I am sending one duplicate set, autographed, to the jail warden, whose considerate treatment I appreciate; and another set, artistically mounted on cardboard, to the judge for court-room decoration.

Reading The Royal Road to Romance reinforces my lifelong passion of exploring interesting things on the road. It all started when my father refused to stop to see Mt. Rushmore while we were traveling cross-country on yet another Navy move. The pre-teen in me failed to see that making time and limited funds and space (six kids, one dog, and three puppies crammed into a van) were not conducive to the leisurely stops I craved. But, I digress. At the museum, I told Mr. Halliburton to take a flying leap off Matterhorn (which he almost did) and quietly obeyed the censors in Mansfield. 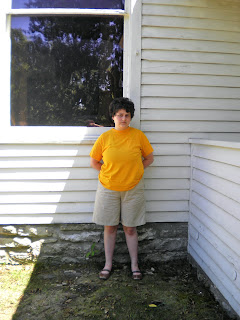 Seeing the house that Manly built was his own hands was inspiring. It began as a two room house with a loft for their daughter Rose: one kitchen and one bedroom. The kitchen amazed me. Almanzo built all the cabinets by hand! When Laura needed a breadbox, he built it. He made stick lamps, baskets, and trays for her. How he tailored the kitchen to her needs was ingenious. The counters at the sink had built-in slats to hold up drying dishes and were installed at a slight angle to let water drain into the sink. What was a cutting-edge wood stove had a compartment for heating water. He ran a line from the spring to the stove and made a wooden plug to stop the water after filling the compartment. He put a woodshed next to the stove to store wood. When Laura bought her first refrigerator, he made an extension out of the wall of the kitchen for a snug fit. Because she disliked baking bread, he built two large windows with built-in seats on either side of the kneading table, so Laura could either chat with guests or look at the critters while she worked. 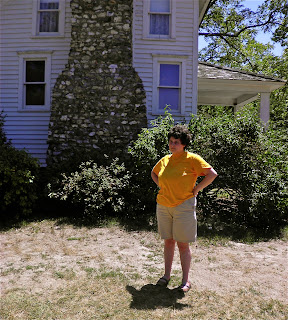 Over time, they upgraded their house. They were one of three places that had electricity in the 1930s (equipment and installation funded from the proceeds of their daughter's first book). The rest of Mansfield had no electricity for two more decades. They added rooms (bedroom, bathroom, music room, library, family room, etc.) until they had a total of ten, not including several porches. When their bedroom transformed into the dining room, Manly knocked a hole in the wall to make the transportation of dishes to the table more efficient. They tried out the newfangled electric stove for a few meals but found the wood stove produced more flavorful food. (What would Laura think of microwaves?) The house was fully of such romantic treasures: Almanzo's medicine box full of treatments for the life-long pain he endured from his bout with diptheria and the clock (all described in The First Four Years).

Almanzo carefully constructed the sturdy fireplace with rocks found on the property. They spent their evenings busy with handwork. Laura did needlework, crocheting shawls and lacy filet decorations on the furniture. Almanzo hooked rugs from burlap and wool strips (just as my dad did when we lived in Newfoundland, Canada). The music room held Rose's organ, and I ended up buying a CD of music played on her organ and Pa's fiddle (which took a prominent spot in the museum). 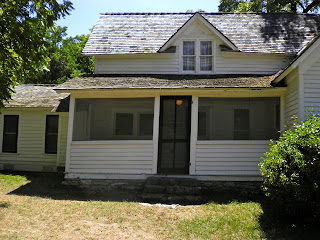 Halliburton whispered in my ear again upon entering the library. On the shelf within eyesight stood five books, one of which was Tennyson's Poem! Little Town on the Prairie describes "a perfectly new book, beautifully bound in green cloth with a gilded pattern pressed into it"—see a picture of it here). The one sitting on the shelf was red, so I suspect it was not the original. I was so tempted to take the book and peek inside for the inscription. When I glanced over to built-in bookcases roped off in the sitting room, I wanted nothing more than to wait for everyone to leave and spend a few hours perusing the treasures there. The sensible adult in me countered everything Halliburton said, and I dutifully followed the blue-haired tour guide out the door.

Pamela did leave her mark though. Her auditory processing skills have improved so much that she listens to what people say. Once everyone assembled into a room, the tour guide began her spiel. When finished, she would ask, "Does anyone have any questions?" Since Pamela has not learned the fine art of giving others time to think, she immediately answered, "No!" Eventually, everyone began to anticipate her reply and we all giggled when the tour guide arrived at her question.

The final two pictures are the rocky house that Rose had built for her parents. When she came to Mansfield after becoming a successful writer, Rose wanted to give something back to the Wilders. She hired people to construct this gorgeous house. Somehow, a house built by unnamed workers lacks the romance of the quirky house that Almanzo made with his own hands. They moved into the rock house out of respect for their daughter, and she lived in their old house. Ten years later, she moved away and they settled back into their beloved home. Somehow, the rock house seems too antiseptic and lacking in personality in comparison. 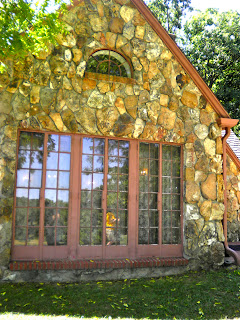 A final wave of romance hit me at the rock house. Up until the 1990s, regular people owned and lived in the rock house that Rose built. Imagine what it would have been like to live in a house full of such history. I can see myself bragging to friends, "Oh, yes. We live in the Wilders' old place. Not Almanzo's house, but the one that Rose built for them." 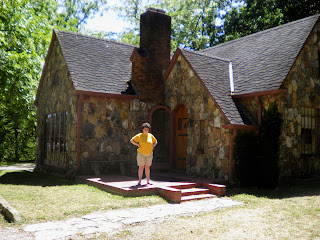 LOVE IT. And love that Pamela can accompany you and truly enjoy travelling. You have raised yourself a lovely companion. :)

I was an avid follower of the TV show, Little House on the Prairie. Thank you for rekindling my memories. Nope, wouldn't have a clue about the Taylor Swift comment... I am an also an out of date mum! :)

Well, Di, I have hit so many of the sites that I should put seeing all of them on my bucket list. Actually, when I read "The Royal Road to Romance", I realized that Halliburton was the inventor of the bucket list.

Elf Mum, exactly. Pamela does not endure traveling. She enjoys it too. I always hold out hope for a little more independence for her, but I will settle for her being a lovely companion.

We did those same things when we could travel alongside Ken. Haven't seen Rose's house though. What a wonderful blog! I just saw Halliburton's book in a used bookshop and think I have it. Must check on that from your comments!

So fun to read your description of travels with Pamela and I love that you wove Haliburton in. The Royal Road to Romance was a favorite family read several years ago.

It was great to see you, even briefly, at the conference back in June.

Press on. You are one amazing woman!