Last fall, a friend brought baby slider turtles to Pamela's watercolor class. At the time, I had wished we could have observed them from the very beginning when my friend had first started posting pictures of the nest on Facebook. Having learned my lesson, I contacted Pat right away when she announced the laying of more eggs in last summer.

On July 20, the mama came to my friend's yard in a golf course community, dug up some dirt, and laid some eggs. Pat heard crows in the neighborhood telling everyone of a pending meal. She grabbed her protective gear and covered the nest with two cages spiked into the ground and nestled in bricks strapped together. Without protection, crows, foxes, and raccoons might help themselves to an easy dinner. 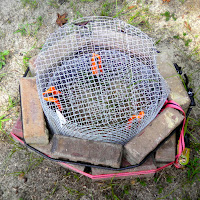 A month later, my friend and her granddaughter opened up the nest to count the eggs and see how they were doing. Slider turtles usually lay eggs in May or June, so this mama was a bit off schedule. Pat found eleven eggs, and all looked well. We paid our first visit on September 7, the day we met the box turtle. Pat removed the protective gear but decided not to dig into the nest. Slider turtle eggs incubate for eighty to ninety days, so they were due to hatch between September 8 and September 18. We saw no signs of hatching (disturbed dirt), so, after taking pictures, we covered up the nest. 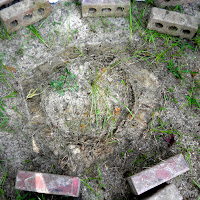 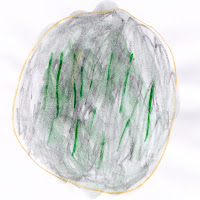 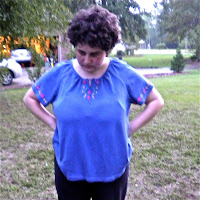 A week later, Pat dug around the nest to check the progress of the eggs. We were very nervous, acting like expecting parents. Were they all duds? Were they okay? What were we going to find? She carefully dug and dug, and then we saw four turtles. Since they were not strong enough to dig themselves out, we left them in the ground. We covered them up with dirt and protected them as before. 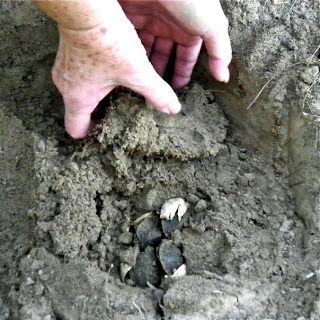 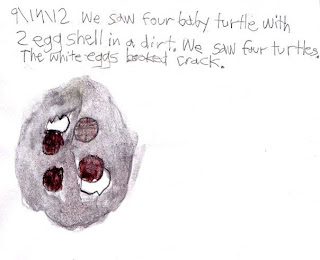 Pat had to go out of town, so she asked a neighbor to keep a close eye on the nest. She was hoping that the turtles would sit tight until her return on October 1. They did not and dug out of the nest while she was gone. On September 30, the neighbor had to retrieve the babies and bring them indoors, where Pat will raise them until they are large enough to make it on their own. Pamela and I headed over to her house and the first thing we did was to locate the duds. We wanted to make sure Pat's friend hadn't accidentally missed a live turtle. We found the remnants of the last two eggs. 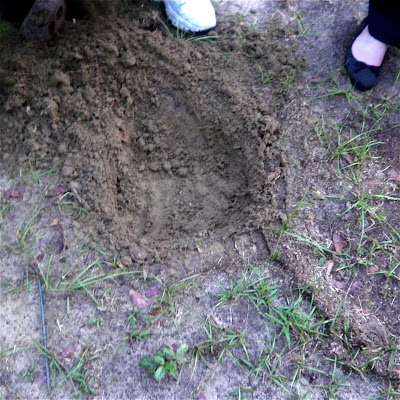 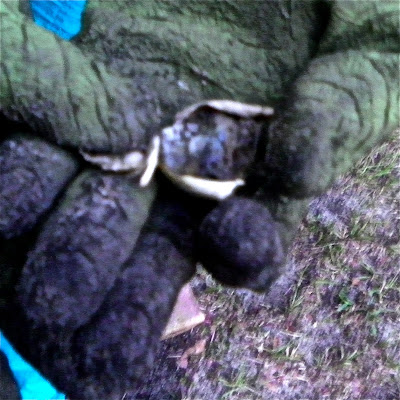 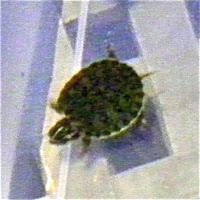 Then, the fun began. Pat wanted to clean out a smaller bin with rocks where they hang out during the day. We helped her carry the nine turtles to a large bin, which Pamela called the "swimming pool." We watched them swim and measured them for their first well-baby checkup. They were 1 3/8 inches in diameter.

Pat, Pamela, and I watched the turtles swim, which I recorded. I was so excited at first that I could not help myself and chattered away, as did Pat. From a Relationship Development Intervention point of view, I did everything exactly opposite, talking quickly and barely giving Pamela time to process.

And yet, she kept up! 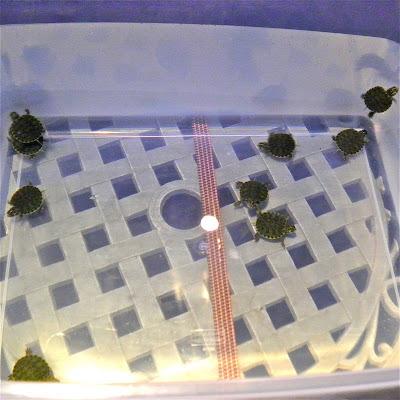 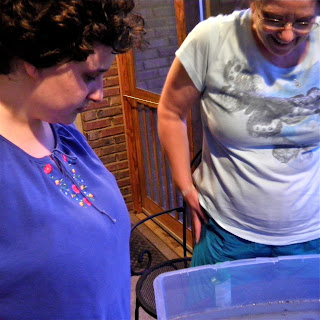 This video illustrates how well she engages in a shared experience. Her comments connect directly to the situations. She shares what she thinks. She manages to engage with nine turtles and add her part to a conversation with two chatterboxes. She pays particular attention to one aspect of animals that has fascinated her for a long time: the claws (which is why she thought of her dogs Loa and Arwen).

SO AMAZING. I'm so impressed with this lifelong homeschooling. I'm sure you're learning a lot about the turtles too!

Shouldn't education lead us all to life-long learning?

The turtles are incredibly cute! I really enjoyed watching the video and I especially liked the fact that Pamela was part of the experience and she also shared her own thoughts. I have found that Nick's processing time has sped up over time, do you think this is also the case for Pamela?