Before getting into the meat of this post, a few unrelated administrative things:
Last Tuesday, Pamela and I attended a lecture by Temple Grandin at the College of Charleston. Her talk was very similar to her talk in Austin two weeks prior.

Because of her language challenges, Pamela is not going to chat in the car on the way home and share what she learned. I know of one thing that resonated with her. When Temple talked about how to help a child slowly become desensitized to balloons, Pamela smiled and whispered, "Just like May 2009!" Grandin was concerned at how few life skills people with disabilities learn. Students graduate from high school without knowing how to shop. "Don’t have a handicapped mentality,” she said. During the question and answer session, parents of young children asked for advice. Temple emphasized to make sure our children are learning to do things and not just sit around all day playing video games.

I felt pleased at how much Pamela does and helps. She has taken over more responsibilities in our meals on wheels deliveries (for example, she fills out the tally sheet). She requires only minimal help with her hygiene (mainly, I follow up in a few key areas). She can shop by herself and, since we know she can do that, she helps me. She is almost to the point of me trusting her to avoid hitting cars with a shopping cart when returning it to its proper spot in the outdoor rack. She carries groceries into the house. She fixes her own leftovers, and, when I had what resembled the flu in October, she cooked a hamburger on the stove! She also loves cleaning trash out of the car.

One thing she does not seem to enjoy is housework. She probably gets that from her mother!

I think Temple's talk must have run more deeply than I had imagined. Last Saturday, I was in the kitchen folding clothes. Pamela announced, "I'm doing chores." She was fiddling with a drawer, but I figured she was just looking for something. I watched her take out all the stray pens, markers, pencils, etc. and place them in an organizer pouch for holding stuff like that. She left the kitchen a couple of times and I thought perhaps she was getting distracted with other things. Sure enough, when I checked the drawer that night, she had done an adequate job.

The next day, she continued her task. When finished, I checked again.

It was a work of art! 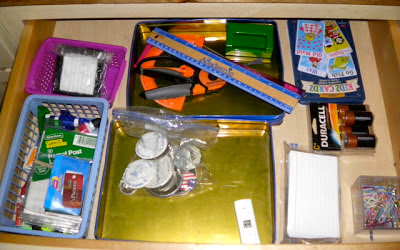 I wondered what happened to some of the junk. Some of it was in the trash, where it belonged. She up-cycled a clean plastic storage container that once held ham and put several sets of card games in that. She put all the craft items, including my crochet hooks, into drawers in the living room that holds all of her sewing notions. I could see how she put a lot of thought into where things belonged. After I posted the picture on Facebook, she received several job offers including one in Australia!

Today, Pamela got under my nerves. She wanted Thai noodles for lunch but I told her I was not going to cook. She still had leftover noodles with spaghetti sauce in the refrigerator. After our little tiff, she announced, "Arwen ate lunch!" I fussed at her some more for Pamela had fed all of those leftovers to the dog! Arg! When the phone rang, I said coldly, "I just might cheer up if you get the phone." She did and left the room.

After I hung up the phone, I headed to the kitchen to fix lunch. Pamela announced, "I'm so happy." She was trying to repair our little tiff. Then, I opened the drawer with the placemats and potholder to look for plastic wrap. It was a thing of beauty to behold! She put all of the stray over-the-counter stuff into a container—heartworm medicine for the dogs, cough drops for the humans, and several punch cards holding garlic pills and expectorant tablets. She put the old batteries that have been taking up space for years in the trash. Not only did she clean, but she correctly reasoned that her actions might smooth over our fight. She had guessed well! 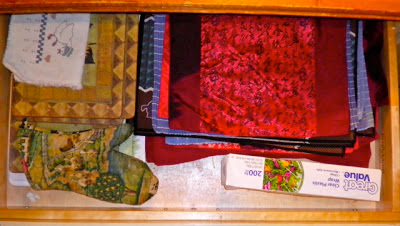 A little consideration, a little thought for others, makes all the difference. ~Winnie the Pooh

beautiful.
Can she come to my house?!!

Temple Grandin said for people with autism to find their niche doing jobs that folks will pay you to do. Maybe, Pamela can organize drawers by day and paint by night.

You are so patient and wonderful with Pamela. I wonder, does Pamela know when she sorts through the junk drawers what to throw out and what to keep, those criteria? Because otherwise I have to say you have very sparsely populated junk drawers.

I am telling you, I need your daughter to come teach my daughter that fabulous set of skills.

Elf ma, she knows whether other stuff is stored so she moves some of it there. She is slowly working her way through drawers. Today, she put a bunch of markers in Ziploc bags. I plan to have her "test" them and throw out the dry ones.

Melisa, this skill is definitely self-taught.

Annie, she really is becoming a considerate person who is her own person, too.

Pamela continues to organize drawers. Today, she found all stray keys, put them on rings, and hung them up. She told me it is like hunting treasure!

Today's update: Pamela gathered all the stray miniature U.S. flags that we have collected over the years for Veteran's Day. She put them in a vase. We have five and I never realized we had enough for a bouquet.

Thanks for the encouragement, Floortime Lite Mama! :-)