Lessons about Learning from a Praying Mantis

Has it really been three months?

Between retreats and starting a new school year at Harvest, my poor blog has been quite neglected. Pamela and I just returned from l'HaRMaS in Canada and, if you want to know more about it, Mama Squirrel has written a series of posts about it: our bedtime story Roxaboxen, delighting in a praying mantis eggs sac as a party favor, feeling empowered rather than small and dim, on place and architecture, acting on ideas, THE Voice, learning-serving-learning-serving-..., and starting with a story. 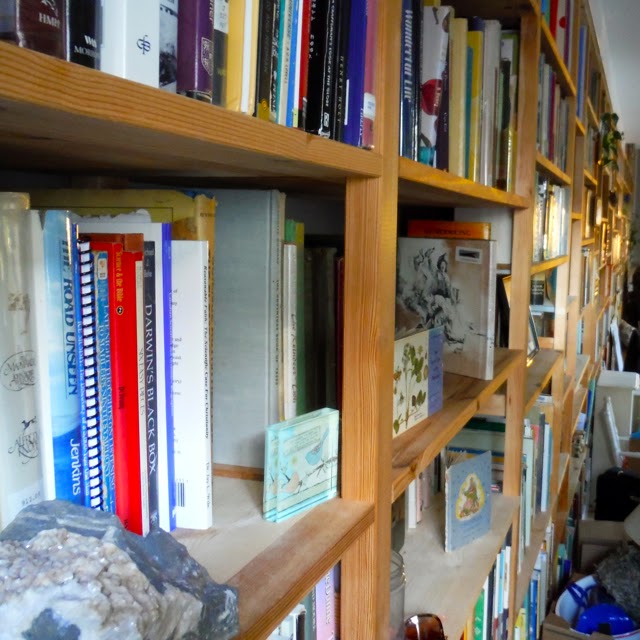 My friend, Jennifer Gagnon, blog writer of BeLikeFabre, lives out what we believe. Her bookshelf — an AmblesideOnline paradise — mesmerized Pamela and I. Every inch, from floor to ceiling, from one end to the other end of a joyously long wall is crammed full of literary treasures and hidden gems. On a table nearby sat a white ceramic pot with another guest she was hosting, a praying mantis that we named Hildegard, of course! Watching Hildegard eat a bee reminded me of important lessons about learning. 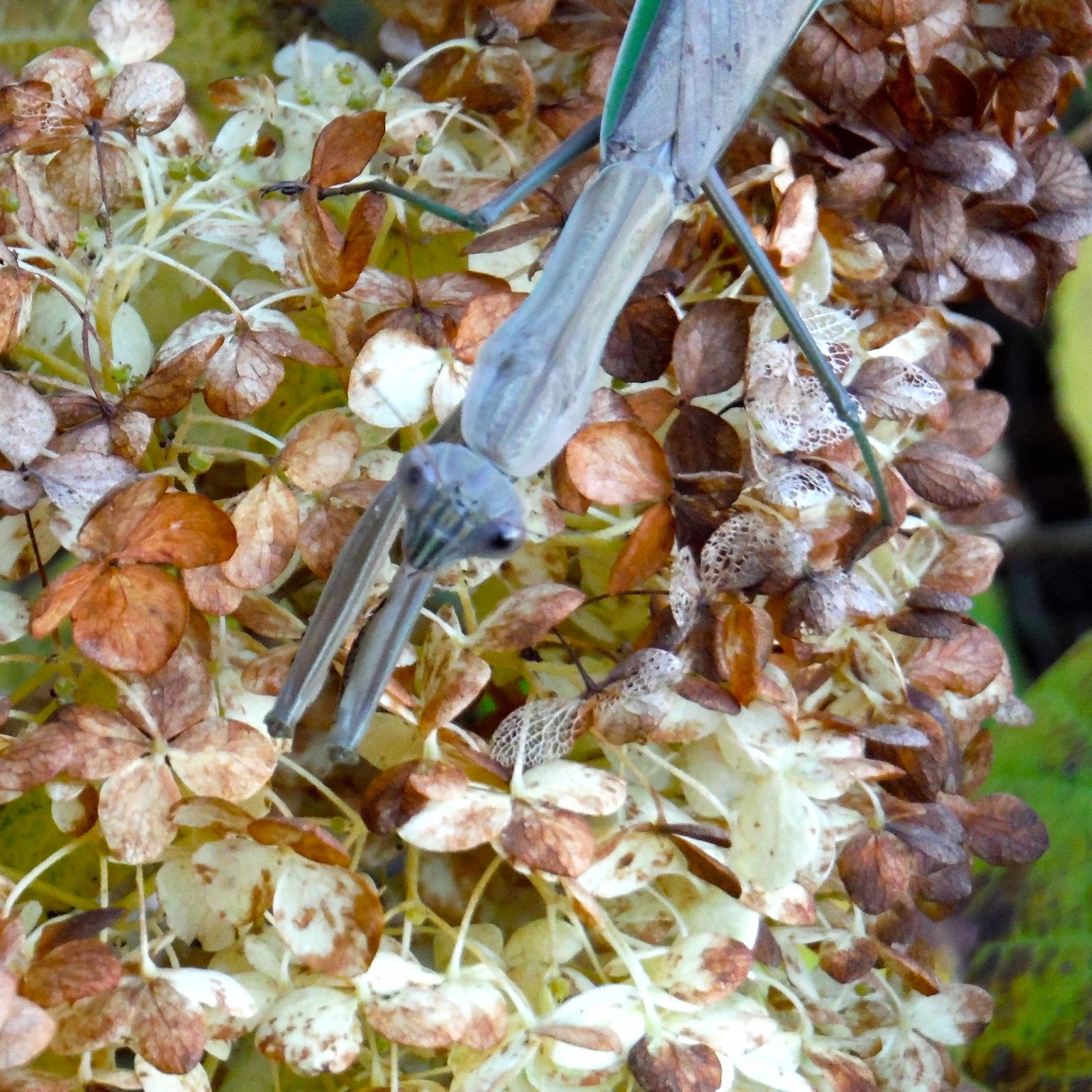 Before Pamela and I arrived, Jennifer and Jeanne (our surprise visitor from Australia) watched Hildegard feed on a spider and a cricket. They talked up the process so much we had to see it for ourselves. The morning after l'HaRMaS ended we stood outside (me in my pajamas), gathered around the pot, and waited for her to attack and eat a bee. We watched and waited and watched and waited and... Occasionally, Hildegard would focus intently on the bee and move her head to track it. Poor Kathy delayed her departure for the airport as long as she could to see the great event.

We tried scaffolding Hildegard to speed things up. In the process of moving the pot, the stick where she perched had gotten stuck under a plastic container. Jennifer tried to give her a leg up, but the mantis grew frightened and fought her help, even trying to bite her. Things settled down, and Hildegard tracked and follow the bee's movements. She knew the distance was too far but did not realize the plastic wrap covering the pot prevented the bee from flying off. She did not know that climbing onto the container would close the gap between herself and her prey. We tried pinning the bee to the edge of the pot, hoping a leaf protected fingers and thumbs from its stinger. Even that did not encourage her to pounce.

Hildegard neither knew nor cared that Kathy longed to see the big event. That minutes were ticking by and our friend would soon be bound for the airport. She tracked the bee warily but did nothing more. We offered her a big leaf with a long stem, and she ended up stuck under that, too. We pushed a hydrangea and stem to no avail. Kathy left, and we waited some more. Hildegard stayed hidden below the scaffolding we had offered her.

My mind wandered while we waited. As Dr. Gustein points out in a recent note, we are born driven to seek out and engage in challenging situations. Certain conditions encourage the most growth. Learners are most engaged when they feel safe and supported. All of our hurried attempts to scaffold her must have frightened her terribly. It took her a long time to feel secure enough to venture out of hiding. That is what happens to all learners who have been placed into environments that create frightening learning experiences.

Clearly, Hildegard needed to feel a sense of normalcy — that things fell into a predictable pattern that made her feel at home. The unfamiliar environment of the pot and our frantic attempts to help left her unsettled. All the resources of her meager brain were channeled toward safety. Once we left her alone and watched her without prodding her, she settled down. She began to feel secure. Slowly, a foreleg crept up to the plastic container. She waited for signs of trouble, and, when there were none, another leg popped up. One by one, carefully, hesitantly, the mantis crawled on top of the container.

Once we backed off, we saw that she could handle the challenges in her own time, Hildegard made progress. It was not immediate. She saw the bee but did not pounce on it right away. She started to track it. It looked almost as if she were measuring it and assessing whether or not she could manage it. Fabre's description is exactly what we saw,

For a long time she waits in vain ; for the Wasp is suspicious and on her guard: still, now and then a rash one is caught. With a sudden rustle of wings the Mantis terrifies the newcomer, who hesitates for a moment in her fright. Then, with the sharpness of a spring, the Wasp is fixed as in a trap between the blades of the double saw — the toothed fore-arm and toothed upper-arm of the Mantis. The victim is then gnawed in small mouthfuls. 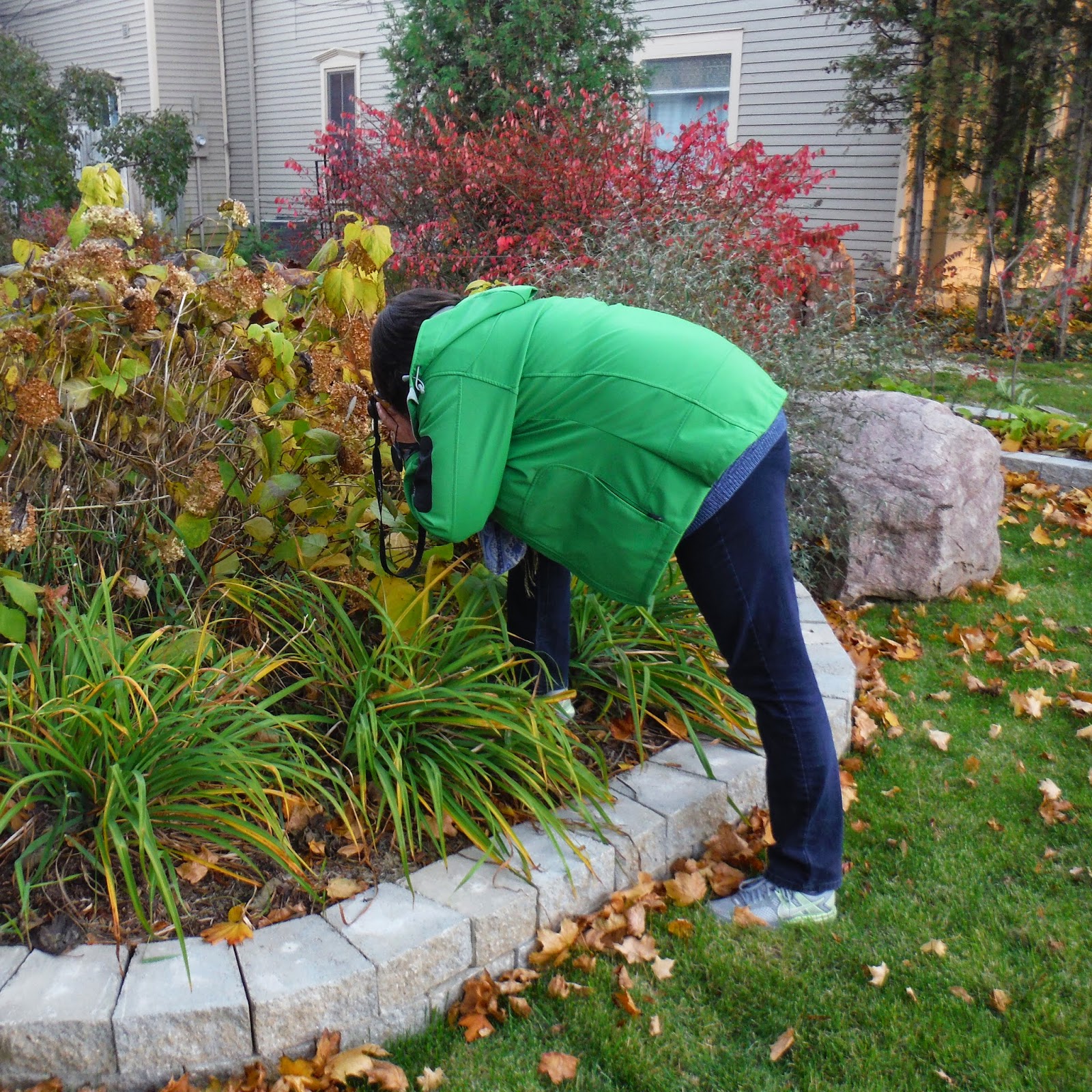 Before we headed out on a nature walk along Lake Erie, we released Hildegard and took lots of pictures. She's quite a celebrity. You may be wondering how to apply these lessons to learners in your life. How does one approach the ambitious Year 7 of AmblesideOnline with a person whose language skills are very delayed? Well, I will let you know in my next post because that is exactly what Pamela and I are doing. 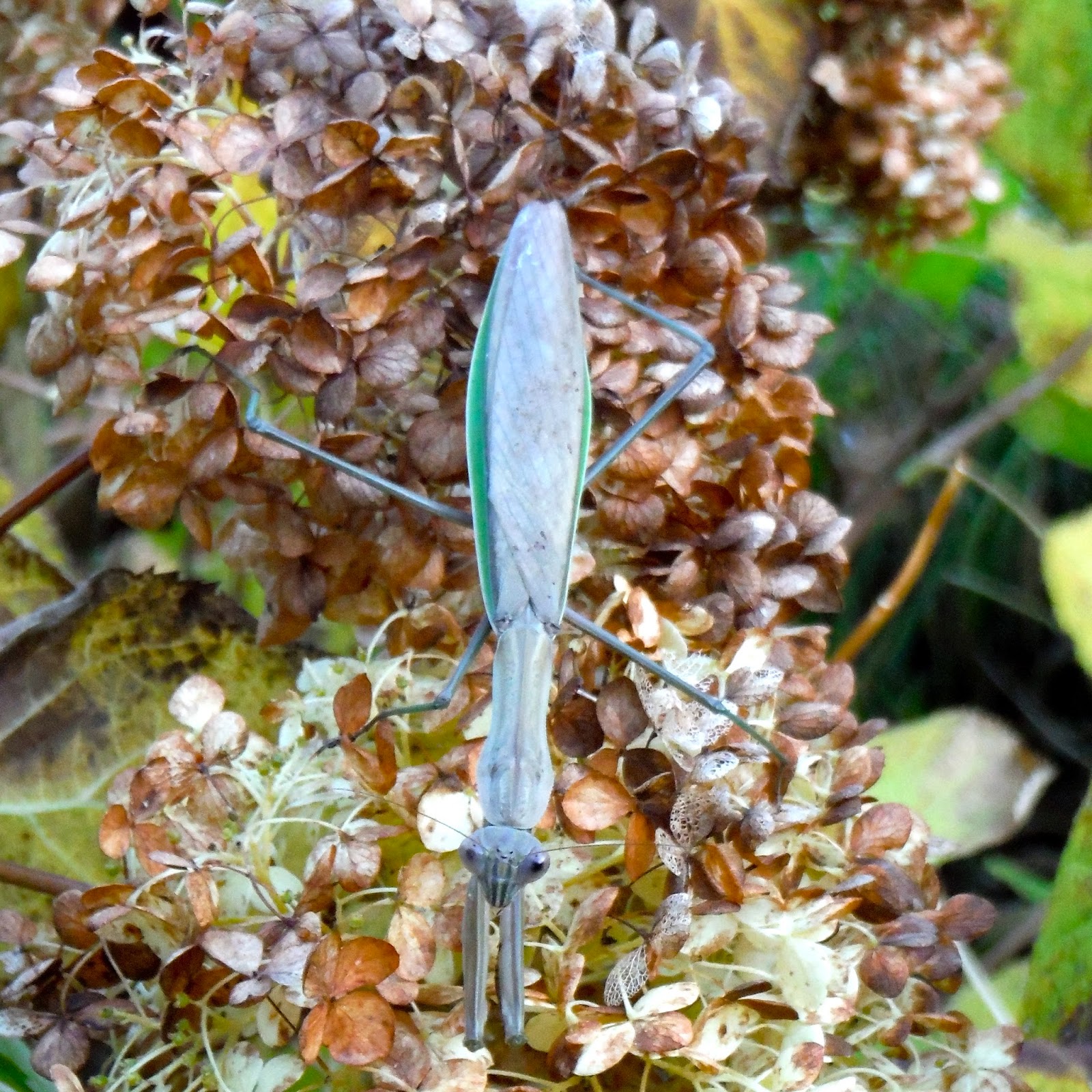 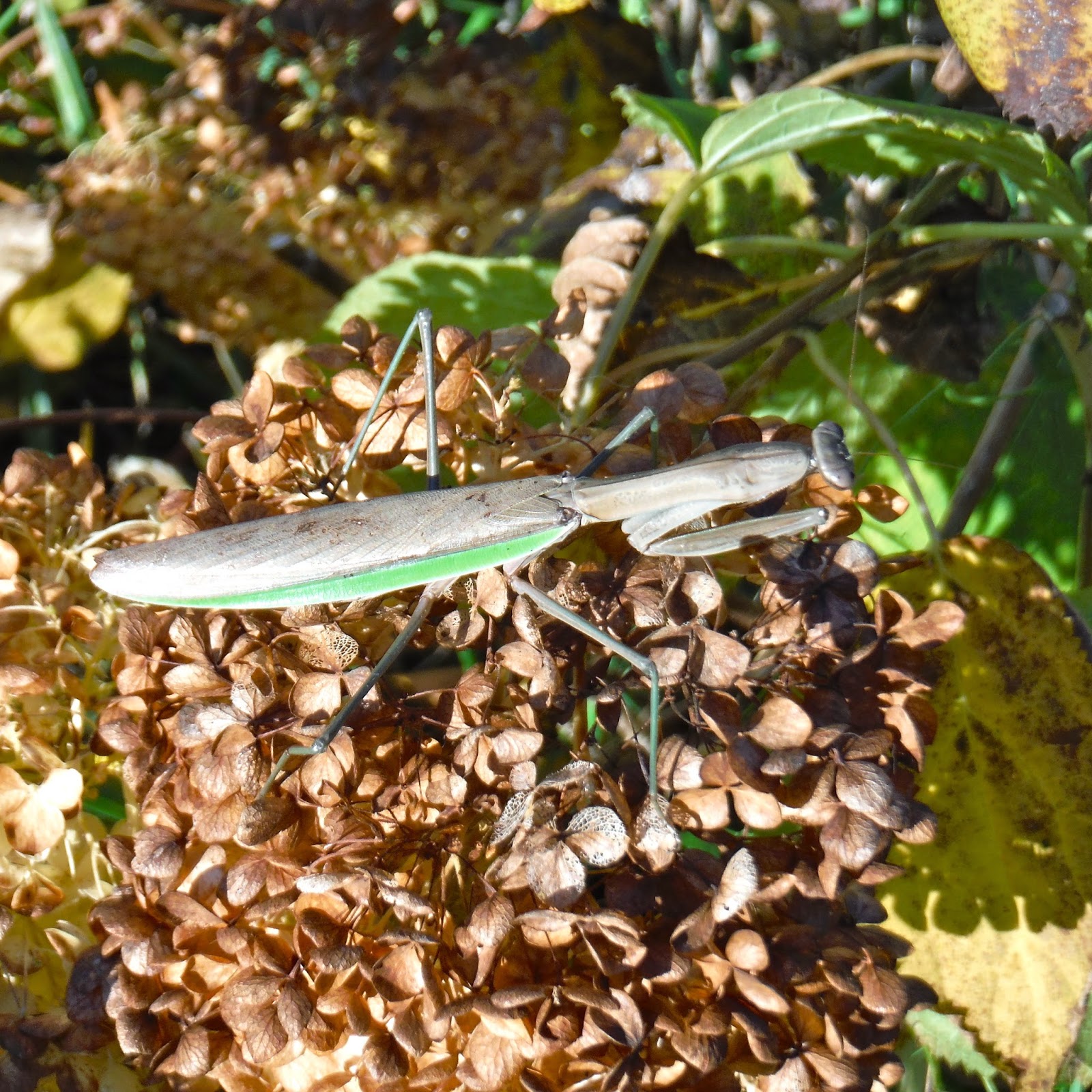 "Certain conditions encourage the most growth. Learners are most engaged when they feel safe and supported. All of our hurried attempts to scaffold her must have frightened her terribly." Tammy, that's such a wonderful connection - and convicts me in my impatience for my kids to "get on with it." There's some lovely blog posts coming out of that weekend!

"Certain conditions encourage the most growth. Learners are most engaged when they feel safe and supported. All of our hurried attempts to scaffold her must have frightened her terribly." Tammy, that's such a wonderful connection - and convicts me in my impatience for my kids to "get on with it." There's some lovely blog posts coming out of that weekend!

Wow, thank you for all the links! I love the Hildegard story too.

Wonderful post! Everyone continues to learn. Thanks for the links to more about the conference. Yes, Pamela can do Year 7. Slow and easy. Hope she memorizes good poems along the way!

Kathy, hurry up and wait may work for the military but, for education, be still and know is better.

Mama, the pleasure is mine.

Bonnie, that is so true. The homeschool high schoolers have not had the chance to experience living books and we are trying to make up for that. They were listening to Alfred Church's version of The Iliad. The conversation was so lively that an uncle of one of the younger students who had stopped by to deliver something sat in the class for an hour because it was so interesting!

Great thoughts & connections. All the best for your year 7 adventure.