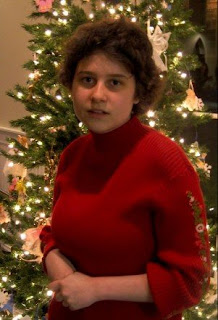 The City on a Hill concert turned out GREAT yesterday! We have been practicing this collection of contemporary Christmas music since Thanksgiving. The youth/"young" adult choir consisted of mainly teenaged girls including Pamela plus David (the only teenaged boy) and two men and three women to even out the parts and take on some of the solos. (Personally, I question the use of "young"--all but one of the adult singers were parents of the teenagers). The girls at center stage performed simple choreography during most of the songs, and one, a trained dancer, added an elegant touch to two of the songs by improvising her solo dances. The PowerPoint slide show on the DVD track gave our concert an extra visual boost.

We performed two songs at the two morning services to give the congregation a teaser. We attended our final dressed rehearsal at 330 in which we ran the thirty-minute program twice before our performance at 530. Such a schedule can easily overwhelm Pamela, so she sang with the choir at one service and skipped the rehearsals. That accommodation kept her fresh for the performance, and she did a wonderful job!

The last song had a little bit of choreography for the entire cast. I worried because we had only ten days notice for Pamela to learn these simple moves: step right and left while snapping during parts of the song and arm raises during other parts (first right, then left, and both down in front). Because she cannot snap, Pamela flicked her fingers and had no problems with the arm raises. Occasionally she danced ahead of the tempo, but I danced next to her and nudged her to slow her pace.

I had a solo and had been fighting laryngitis last week. My voice was not completely back on the low notes. Fortunately, it worked because the first verse of Great Light of the World about being afraid and alone--my slightly crackly lower range fit the mood. My upper range was back to normal, and I was able to soar during the chorus with its hopeful lyrics. By the time the second verse, which had a more confident message, the mucus had cleared out of my throat and I could belt it more.

Great Light of the World required one more accomodation for Pamela. Our side of the stage had three stools for another singer, me, and Pamela, who sat closest to the audience. After I moved up front to sing my solo, everyone in the cast held a candle and lit it. We discovered during rehearsal on Thursday that Pamela panicked if anyone on the three stools lights a candle. Because of my position up front, I was not able to talk her through this and soothe her. We came up with an easy solution: the singer on the stools near us moved to center stage with the choreography teenagers and walked with them bearing lit candles to form a semicircle behind me. Pamela stayed calm with this minor adjustment. The night of the show Pamela showed no anxiety because we found another way to accommodate to her needs that did not detract from the performance. In fact, this alternation made the production run more smoothly because the singer on our side of the stage sang the next solo and reached her mark more quickly!

We all agreed that we peaked during the performance. It turned out better than expected—short, sweet, fun to sing (and hear--I hope). Our audience had more people than chairs, and so many people congratulated Pamela on how well she did! Steve had tears in his eyes because he remembers the little girl who once shrieked her way through circle time and flopped on the floor in large crowds. As always, her bright smile made up for any awkward moves!
Posted by walking at 08:43

This post made me cry. Congrats and Merry Christmas. Thank you for sharing. Sincerely, Diane