Trifecta at Islands of Adventure 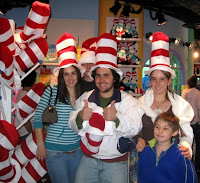 Pamela plus her dad, brother, and I spent the day at Universal’s Islands of Adventures in with her cousins and their cousins. Pamela enjoyed a trifecta of heavenly bliss with her interests, sensory integration, and imagination on hyperdrive! We have been so busy moving to a new house and cleaning the old house that I had no time to investigate what the park had to offer. Fortunately, Pamela’s cousins in the Seuss hats knew the park backward, forward, and upside-down. They managed to balance going between rides and shows for all and rides only the daredevils would ride. 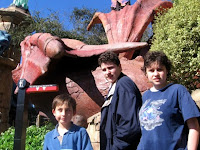 Seuss Landing stimulated Pamela’s interests to the maximum. She has adored Dr. Seuss books and cartoons for years. She has four DVDs with her favorite cartoons, The Hoober-Bloob Highway being number one and The Lorax a close second. When we first entered Seuss Landing, Pamela could not look up. Seeing Seussian imagery in 3D living color overwhelmed her with joy, and she could only sneak glances here and there and everywhere. She tends to have a flat affect as pictured here with her brother and youngest cousin, waiting for the wild ones to ride Dueling Dragons. Her face only brightens with extreme emotion. Her expression standing under a cherished truffula tree shows her stunned by bliss. A shot with the Lorax was too much for her to handle, so we skipped it. 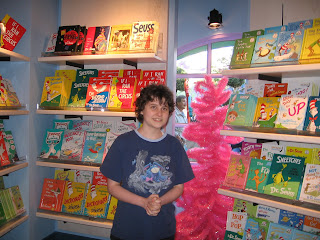 We left Seuss Landing in search of other rides, and she still had not lost her childlike joy on her second trip to Seuss Landing. Surrounded by her favorite books delighted Pamela so much we had to make five attempts to encourage her to leave before she succeeded. We rode two rides, The High in the Sky Seuss Trolley Train Ride! and The Cat In The Hat, and an enchanted smile blanketed her face the entire time. She thought she was living inside of her favorite books. One thing that drives an autistic person is their interests, and Pamela felt like she had taken a trip to the moon. 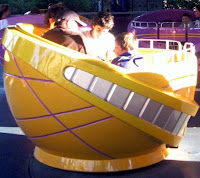 Autistic people have difficulty integrating all their senses. Sometimes, those like Donna Williams can only manage video or audio input, not both at the same time. Others have very sensitive senses, such as hearing and touch. The reason why some auties cover their ears is that the noise is too loud, much like bionic hearing one can never adjust. The reason why some auties avoid being held and touched is that their skin perceives it as pain. Every autistic person has varying degrees of avoiding (hypersensitivity) and craving (hyposensitivity) certain sensations. When an autistic person faces too much sensory input for too long, she might meltdown (throw a massive tantrum) and shutdown (stare blankly into space). The secret to preventing sensory overload in Pamela is pictured to the left!

Let me explain! You may have studied five senses in health and science classes, but two more are sometimes affected in autism: proprioreception (page 8) and vestibular. Proprioreception is sensing movement in your joints: if you close your eyes and move your arms in the air, you are able to know where they are in space without seeing them. Oliver Sacks describes how challenging life would be with impaired proprioreception in The Man Who Mistook His Wife for a Hat. One woman relearned how to walk after a virus damaged this sensory system by watching what her legs did. One lapse in attention would cause her to topple. Kids who crave proprioreception are ones who bang on things, crash into things, and fling their bodies on top of everything.

Vestibular sensation is the key to keeping Pamela cool. In the inner ear is liquid that tells your body whether things are stable or rocking and rolling. If you ride a merry-go-round and start to feel dizzy, your vestibular system is overwhelmed by all the movement. Some people with autism, like Pamela, have no post-rotary nystagmus (meaning they can spin without getting dizzy). Those who spin or spin objects crave vestibular. When spun, they feel joyful. Stimulating Pamela’s vestibular system has been one of my tools in calming Pamela. When she was young and in a situation that frustrated her, I would watch for signs of distress. We would leave the room to spin! I would grasp her underneath her arms and around her chest, lift her, and spin in circles with her feet off the ground. I did this until her body relaxed (or my nystagmus stopped me). When the tension left her body and her muscles melted, I knew she was ready to meet any challenge. Rides like Doctor Doom's Fear Fall and stimulated her vestibular system and Pamela loved every minute of it. Stimulating her vestibular system allowed her to tolerate a very long day, walking all over the park and waiting for her cousins to ride the daredevil rollercoasters.

The final element stimulated by this park was Pamela’s imagination. Yes, some autistic people do have an imagination, tapping into their ability to associate minute details that are related. While riding a log chute ride that splashed us plenty (Dudley Do-Right's Ripsaw Falls), Pamela screamed with delight and announced, “Just like Narnia!” She was recalling the frozen river scene in the movie, The Lion, The Witch, and the Wardrobe, and imagining riding alongside Peter, Susan, and Lucy. During the The Amazing Adventures of Spider-Man ride and the Poseidon’s Fury show, the balls of fire and special effects reminded her of the Gameboy Advanced game, Mario and Luigi Superstar Saga. She compared the setting of The Eighth Voyage of Sinbad to the two Pirates of the . Her imagination was on hyperdrive during shows and rides.

Universal’s Islands of Adventures theme park had the worst conditions for a person with autism: waves and waves of people and plenty of noise. Purchasing an express pass prevented the frustration of waiting too long. However, the trifecta of interests, sensory integration, and imagination helped keep her happy and calm during our long and busy day.

I just found your blog (while looking for T-Day recipes) and I'm loving it! What a great description of a day at a theme park with your daughter. My 8-y-o son craves vestibular input, too; I used to have to spin him, or swing him front to back between my legs, until he got too big for me to do that! My 10-y-o Aspie son & 5-y-o NT son have been asking lately to go to a Disney theme park. Your blog entry is one more affirmation that, yes, we just might be able to do this! Wow, thank you so very much!

Hey, Christina, I know you can!!!!! Thanks for stopping by!