How Not to Be Frazzled by Fractions!

Last week, Pamela was supposed to be wrapping up the final lesson on subtracting and adding fractions, including complex problems like finding a common denominator. She usually finds it easy to keep pace with the logic required in Making Math Meaningful Level 6. She could do everything except borrow one to make the fraction in the minuend (positive term) larger than the fraction in the subtrahend (negative term). The question I pondered all weekend was how to apply scaffolding to this!

At first, I fell back on my visual-kinesthetic worksheet-ish sort of thing because I thought, once she visualized it, she would understand it. I set up all of the colored boxes and let her fill in the numbers.

So, I decided to try the scaffolding approach:

(1) Shared Understanding: I recalled how Pamela worked these problems to figure out what she could do independently:
(2) Zone of Proximal Development: Then I figured out what Pamela needed to learn to do:
I considered whether or not these skills are in the Zone of Proximal Development. Then, I recalled that she has no problems borrowing for numbers with more than two digits. And then, I realized that building upon what she already knows might be the best way to nail it! Clearly, this skill is in the zone.

, "when adults ask children questions and make suggestions that permit them to participate in the discovery of solutions, then transfer of useful strategies to the child is maximized" (page 49). Charlotte Mason's book Formation of Character provides many examples of how parents can teach children to self-regulate. The key is to let language help the child reflect on alternatives, which is what she put in her twenty principles:


Children must learn the difference between "I want" and "I will." They must learn to distract their thoughts when tempted to do what they may want but know is not right, and think of something else, or do something else, interesting enough to occupy their mind. After a short diversion, their mind will be refreshed and able to will with renewed strength. Principle 17 translated into modern English by Leslie Laurio

Pamela and I have been doing joint problem solving for years! Scaffolding requires the parent to observe the child's level of competence. When the child falters, the parent provides more support. When the child is sailing, the parent simply observes and makes little encouraging remarks. A nearly mastered task, like this one, only needs indirect hints, while tasks at the outer edge of the zone require more direct, pointed support. Laura Berk gives a great example of how a father and his daughter put a puzzle together with these joint problem solving techniques in Chapter 2 of her book. 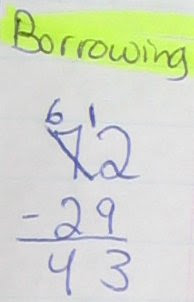 Warm parenting is a no-brainer for me. I had already determined how to help Pamela self-regulate by comparing borrowing with fractions to what she already knows. All I needed to do was to watch for moments of confusion and guide her thinking with an insightful question or statement.

The first thing I did was to remind her how we borrow for a two-digit number. Charlotte Mason loved this technique of taking what is already known and relating it to the unknown.

Here is her first attempt. She did pause a couple of times and reference me when uncertain. She was quite excited to see that what puzzled her yesterday became clear as day today.

The exciting thing was Pamela did most of these problems without hesitation in the many variations you can have. You would think that mastering this within the first five minutes of applying this strategy would have made my day. But, no, I have even more excitement to share once you scroll past the pictures! 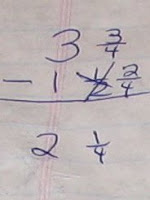 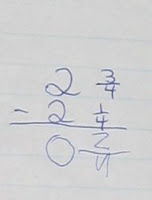 So many new discoveries for you and Pamela, exciting!!

You are an incredible teacher!!!!!

You couldn't have posted this at a better time, Tammy! Austin will be moving into MUS Epsilon soon, which is fractions. I have found it very important to tie in the new learning to what he already knows! You've just saved me the time of having to figure out how to do that for myself! ;)

I am glad to be of service Jen . . . This was so clear and effortless for Pamela. Part of it might be that she had already nailed most of the steps. I think the process of scaffolding is important, especially taking the known to teach the unknown.

did ya see this? LOL! Down with Fractions!! i thought of you when I saw this... All I know is that Andrew LOVES fractions so I'm gonna keep doing them;)

As a mathematician, I am appalled. When kids rely too heavily on calculators, they loose a feel for number sense and are not able to think through more complex calculations.

1) My autistic daughter LOVES Roman numerals and begs to differ. How else can you read the credits on old movies?

3) Can you say round-off error? If you use too many decimals in repeated calculations like division between very big and very small numbers, round-off errors add up very quickly.

4) Calculus first, then fractions? Again, I am appalled!