We wrapped up our mini-blitzes this week with simultaneous patterns. You may be wondering why RCR patterns are so important or why our consultant typically has families do blitzes, two or three weeks per pattern! Because Pamela caught on to the patterns when our consultant tried them with her, she assigned mini-blitzes for us, two or three days per pattern. I think she wanted me to learn from them more than Pamela!

What did I learn? I can take something as dull, boring, and possibly static as a pattern and imbue it with the joy of interacting. Whenever I showed facial expression and other nonverbal communication and slowed down enough for Pamela to process, the quality of our interactions shot up. The most fun patterns for us were the ones which did not come naturally: reverse assembly and simultaneous (to be described in this post). Why? We both were forced to slow down and work together as a team. We felt like we were in the zone, even if we were moving slowly. One person commented that Pamela and I shone in one of the video clips! In the RDI world, that is called dancing . . . the intangible ingredient that "makes everyday social encounters so wonderful" and "the simplest forms of communication" that "lead to the most wonderful moments" as described in the book, My Baby Can Dance. 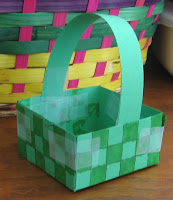 One thing you will notice in the clips on the maracas and rocking chairs is that I broke down the actions into clear steps and slowed down the action to a pace that she could manage. I gave her nonverbal feedback so that she had to pay close attention to me and what I was doing. I varied the pattern enough that she could not go into automatic pilot. I would love some insight on something we picked up on the rocking chair segment. David, the cameraman, zoomed in on Pamela's face and we noticed how she couldn't give me a steady gaze. She consistently shifts her eyes away from me and back to me when I stopped the action. That makes me admire her even more because it must take much more work to offer full attention! Any thoughts?

Tammy, you meant to say "couldn't" give me a steady gaze right? My thoughts are it looked very typical to me. I am uncomfortable staring at someone very long too. Maybe others will disagree, but I think it is very typical.

I fixed the error, Poohder!

Now, here is what is funny! I was telling David what a good job he did filming that because he caught her eyes shifting. While I was talking to him about it, I noticed he had a steady gaze, avert for politeness but not as frequently as Pamela.

Also, I think of situations where I have to watch someone closely--choir director or dance steps in a musical. I keep a very, very steady gaze because in that situation you really need to fix your full attention on the person in charge. This situation was like that--Pamela had to reference me carefully to know when to rock again. So, I expected a more steady gaze than she gave me.

I'm curious if it is connected to which part of her brain she is accessing at the moment. You know how we all look to a certain place when we're trying to remember a specific piece of information, but usually to a different place when we're trying to visualize the directions someone is giving us to a new place? Some people look up and to the right for recalling; some down and to the left for visualizing. (Now we're all thinking, "Where do I look for . . . ?") Anyway, I just wonder if she is working hard to access a certain part of her brain and her eyes are part of that work.

I like Sonya's answer. I also had another thought.I can't remember which RDI Hotlist book I read this in, but babies look away from their parents and look back as a way of self regulating and not becoming overwhelmed. I will be interested to find out what your RDI consultant says about this. Keep us posted.