When did your children start asking why? Pamela has not quite reached the stage of asking why questions, but she is starting with "Why not?" Today, during math, I decided to review adding and subtracting fractions because we have been working so hard on multiplying and decided. She excelled at everything except when she had to borrow for subtraction. She fell back on carrying the one as a ten, not as the fraction indicated by the denominator.

First, I tried showing the chain of logic involved and ask Pamela along the way what I should write next. She had a very hard time and clearly had forgotten the concrete meaning of these steps. 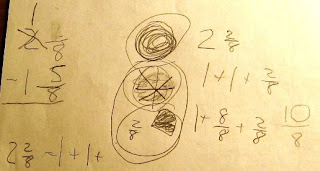 Second, I tried drawing pictures but the steps were not clear-cut enough to demonstrate the chain of logic. Pamela has a very sequential, organized mind, and I knew this was within reach. But, she told me, "It's too hard!" 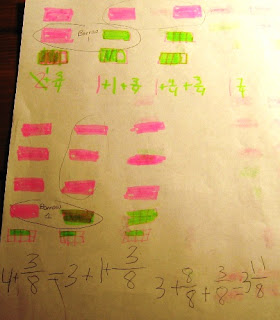 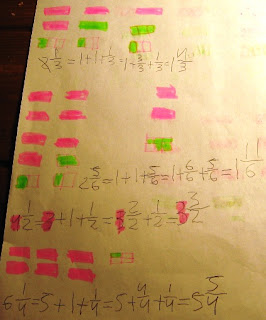 By the second sheet, I continued to ask her as we went along because I was trying to figure out if she understood. Everytime, I had to correct her, she would ask in a semi-whiny voice, "Why not?" I was so glad that she asked that question because usually she just gets fussy or argues. But, this time, she asked why! Suddenly, something clicked. I can always tell because she starts to giggle and flash a smile. I can almost see the light bulb flick on in a cartoon buble over her head. She did the last two problems without help or correction. I like to end on a positive, so we will see what she remembers tomorrow. 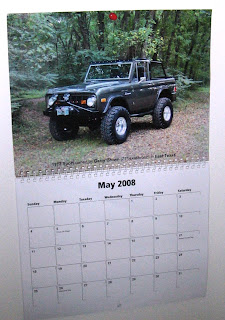 Pamela decided to hang up this Bronco calender in the kitchen. Her Uncle Randy would be proud!
Posted by walking at 20:55

I really enjoy seeing the visual methods you use to master math concepts!