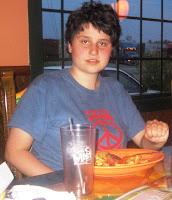 Any day you read this blog is autism awareness day. But, if having a special day floats your boat, then today is it. Everyone is talking about it (even my favorite Bible study author, Beth Moore), so I guess I will do what I always do: blog about autism! By the way, Pamela made the following picture in honor of April and the Easter eggs on the horizon . . . 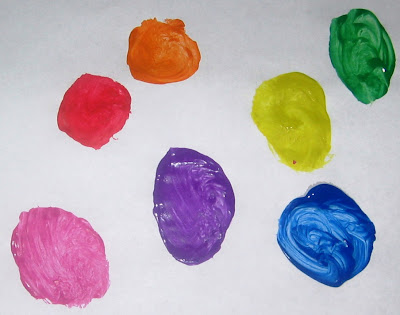 Before I update Pamela's progress in facing her anxieties, I thought it cool to share news about a scientific study about why autistic toddlers study mouths instead of eyes. An NIH-funded study figured out that they pay attention to lip-sync (the exact match of lip motion and speech sounds), not gestures and facial expressions. I tracked with what Dr. Ami Klin observed, "Toddlers with autism are missing rich social information imparted by these cues, and this is likely to adversely affect the course of their development." Then, I backtracked, fell over, and let loose a primal scream when I read the thoughts of Dr. Thomas R. Insel, "This line of research holds promise for development of new therapies based on redirecting visual attention in children with these disorders." Clearly, Dr. Insel has not been reading my blog for RDI is an already existing therapy that has helped my daughter--a TEEN--to redirect her visual attention!!!

While she has improved tremendously, Pamela still mildly struggles with Steve's unpredictable work schedule, especially during certain times of the month, if you get my drift. Yesterday, Pamela stunned us all with how well she handled another late departure. Since we are also working on attaching feeling and meaning to episodic memory, I decided to spotlight her calm demeanor this morning!

We all got up early to see my sister and her husband off to Pennsylvania. Steve walked into the room with his running clothes on at 7:00: Pamela was not happy. She tried to bully him into skipping his run. Giving them both a lifeline, I said, "I wonder what time Dad is going to run." Steve promised he would run at 7:55. Her one--and only--angry outburst lasted less than a minute. Steve headed out the door on time.

Pamela had NO MORE MELTDOWNS. She ate oatmeal for breakfast, a neighbor stopped by, and then she took a bath. I knew she would ask about Steve after she got dressed, so I asked him when he planned to leave. He told me 11:00. Sure enough, after her bath, she asked, "What about Dad?" and she did not balk at Steve's promise.

He was not quite ready at 11:00 but told me he was close. He suggested I get his laptop backpack, so I showed it to Pamela and smiled. She nodded and smiled because she knew Steve was packing up to go. She was a very calm and very neutral girl. 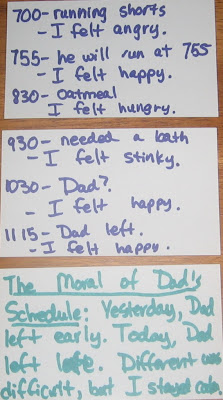 To avoid becoming static, we simply talked about our morning. I only wrote down facts that Pamela easily connected to her feelings. She finds it harder to narrate the entire episode coherently and to extract meaning from a sea of details. When accessing episodic memory of emotional experiences it is hard for Pamela to figure out the lesson learned that may become a building block for future experiences. What is more meaningful: seeing Dad leave for a run, eating oatmeal, taking a bath, or staying calm all morning? It all depends . . . meaning is subjective. If Pamela was a picky eater and had never eaten oatmeal in her life, then eating oatmeal would win. Steve runs all the time, so that is nothing new. Pamela loves taking a bath. The feelings she felt in those experiences were more of the same. What made this morning special was Pamela's increased ability to regulate her feelings in a situation that frustrates her. That was different and worth building upon on unpredictable days in the future.

One of the criteria for autism according to the DSM-IV which flows out of the struggle to embrace things that are different. Temple Grandin explains how difficult transitions were for her during her teen and adult years, "The really big challenge for me was making the transition from high school to college. People with autism have tremendous difficulty with change." Another adult with autism, Daniel Hawthorne, observes, "One's environment, with its ever-changing nature, can be very disturbing to the psyche of children with autism."

The most exciting moment of the video of our chat was in the final minute when Pamela said, "The different was difficult." Even though she found Steve's late departure difficult, she managed to stay calm and her victory is what I wanted to spotlight. Since Pamela has been sharing with me little things that seem different to her, I think helping her encode positive memories of being resilient in the face of change will enable her to be even more resilient in the future.

I love how Pamela is processing change and learning to experience it. I predict soon she'll be enjoying that experience some of the time! :)

2 things I have noticed and will now put in to my home school program; 1. I rearly hear you say the word "NO".
2. You never give her the answer, you suggest diffent things that may lead to the answer your looking for, but you never just give the answer outright..well done!

Also thanks for the videos!! Im learning so much from you and Pam.

Happy(?) Autism awareness day! And what a day with only 1 tantrum!! That is worth a celebration. Congrats and keep up the good work!

Penny, the good news Pamela does enjoy many aspects of change, but there are a couple of areas of uncertainty that still ruffle her feathers . . .

Jennie, you are right about that!

Tiffrutherf, too many people worry about getting something right or wrong. I am focused on how is Pamela thinking and am working on how to guide her thoughts in ways that might have never occurred to her. That is where RDI meets Charlotte Mason, IMHO!

Each time you give a report on anxieties there is an improvement. Well done!

I love this video. I have so much to learn!

I've been wondering about you lately. I'm wondering how you handle narration, or maybe I wonder how Pamela does? What are your expectations for narration from her at this point?