Ten days ago, Pamela and I made our own dry laundry detergent from a very simple recipe. I washed the first load with 1/4 cup of detergent and was amazed at how well it cleaned the coffee stain from the table cloth. Since then, I have gradually decreased the amount to one tablespoon. Today, I washed two loads of clothes, some of which were stinky from hanging out at Striped Bass Festival in eighty-degree weather. I smelled the sweatiest clothes from Saturday and caught a whiff of nothing but the fresh air in which I dried the clothes outdoors. Once we attempt the ultimate test (washing Steve's running clothes), I will post the results! 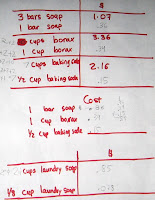 Besides getting the laundry clean with fewer chemicals, we got a lot of mileage out of the activity. While making the detergent, we measured dry ingredients, added, shared the experienced through declarative language, attended jointly, worked on life skills, added a vocabulary word, and practiced nonverbal communication. Last Tuesday, I gave Pamela some ratio problems in which she calculated the cost of each ingredient in the recipe to calculate the costs of 2.25 cups of laundry cost and finally got the cost of doing one load of laundry, assuming 1/8 cup of soap per load: 7.3 cents. Through experimentation, I now know that we can get by with 1/16 cup of soap (or 1 Tablespoon), which is only 3.65 cents per load. With her eye for patterns and her orderly mind, Pamela is brilliant at doing ratios by the way! We also uncovered a gap in her learning which I will fill in down the road: rounding. 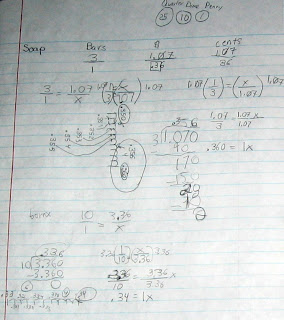 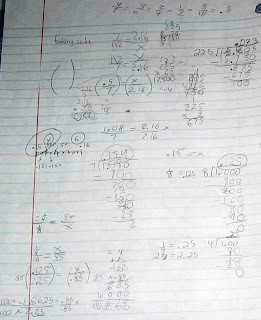 Now that Pamela has enough syntax to speak in complete sentences (thanks to the association method), she is working on being able to narrate orally an episode of her life coherently, reflecting on feeling and meaning. One way we do this is by watching a video of the event and making declarative comments while we watch. At first, Pamela struggled because she wanted to get by with power words, rather than full sentences. Because personal pronouns I and you are so confusing, I scaffolded our use of them by pointing and introduced we, which we have not addressed in the association method yet, because Pamela tends to replace we with they in sentences. Pamela did not remember the new vocabulary word grate from the activity, so I heavily spotlighted it while we watched the video. At first, I scaffolded her need for longer processing times by pausing the video. Once she felt competent, I stopped using the remote controller.

The video of us watching and talking about making soap shows how to work on language without heavy doses of prompting, praising, and drilling.


In the video below, Pamela narrates the episode in one shot. She even attached a feeling to the experience: "it was yucky"! I used that as an opportunity to explore other yucky things for her and told her what I found yucky (plastic bags). I came up with meaning for her (even though things are yucky, we can still try).

I typed Pamela's final narration in Word, which reported that it contained 42 words, 5.2 words per sentence, at a 0.7 Flesch-Kincaid Reading Level. Not only that, Pamela sequenced her sentences well, included the two vocabulary words I spotlighted (we and grate) and attached feeling to her narration:

So happy I came to your page, my son has this same problem..Im reading your suggested reading after I post this..She did those ratios herself..MAN!!!! Good work Mom!!

What resource are you using to teach
rounding? We need to work on that too. Rhonda

Rhonda, what I drew on the paper was my form of scaffolding her so we could move on! LOL! I realized when we were doing the problems that we have not covered rounding and I was going to see if it is in our book (Making Math Meaningful Level 6) or what she will take next (Math-U-See Pre Algebra).