Looking around in Awareness

Let us not look back in anger or forward in fear, but around in awareness. James Thurber

Like many children with autism, Pamela has a hard time knowing where to direct her attention because her brain has a hard time filtering out the insignificant. Back in 1995, she started complaining about bees whenever we did table-work in the kitchen, located next to the front door of our apartment. After careful investigation, I realized that the fluorescent lights in the hallway outside of our apartment were on the blink!

All sorts of sounds bothered her and even terrified her: the car wash, escalators, elevators, vacuum cleaners, etc. Rather than studying the novel sound to look around in awareness and determine if she had any reason to fear, Pamela would flip out! Two rounds of auditory integration training helped somewhat but did not completely eliminate her biggest fears: elevators and popping balloons. Thanks to Toy Story 2, Pamela conquered her elevator phobia at the library in 2004 and even went to a very loud Christian rock concert in 2008. While her sound-based fright is nothing like it once was, she is still learning to overcome her phobias. 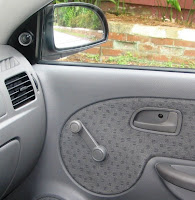 Because she is growing more comfortable in her own skin, Pamela is better able to look around in awareness and control her immediate impulse to wig out at something frightening, scary, or just plain annoying. The other day, we were driving around in our commuter car that has power nothing (I mean it, it does not even have a radio!!!!). Pamela suddenly pointed to the AC--the one luxury no car in Carolina can do without--and told me to turn it off! Because she acted calm and neutral, I obeyed her unusual command. Then, she placed her hands in front of the AC vents, so I said, "The AC is off." I suspected something was bothering her so I listened very carefully and noticed one of the windows was slightly rolled down. So, I nonchalantly rolled my window up, and nothing changed. Pamela saw what I did and she rolled hers up and the sound disappeared.

This vignette may seem like nothing, but, to a parent of an autistic person, this was big. While I did not even notice the noise, Pamela was having difficulty filtering out the wind blowing through a slightly cracked window. My brain filters out more noise than hers (perhaps because I grew up with six rowdy siblings), which is one dynamic function of the pre-frontal cortex. Her cortico-limbic network grew wary, while mine was oblivious. Clearly, her attention-filtering algorithms, a dynamic function of the brain, work differently from mine. Of course, Steve reacts to weird car sounds just like Pamela does.

Rather than impulsively react, Pamela studied her surroundings to find a possible source of the novel sound. She decided that investigating that noise was important and she tested out the AC theory by telling me what to do. Her pre-frontal cortex seemed to managing her uncertainty well because she inhibited impulsively reacting and choose to think through what might be happening, which is a second dynamic function of the brain.

When the sound did not go away, Pamela checked out her environment further and referenced my actions. Because she has learned to trust my actions from previous experiences dealing with scary sounds, she stayed calm and continued to think about the meaning of my actions, a third dynamic function of the brain. She understood my window theory and, when my actions made no difference, she tried it with her window and solved the problem.

Chapter 1 of The RDI Book covers five dynamic functions of the brain, the three mentioned in the previous paragraphs and two blogged recently. Pamela has been confronting her fears lately--of her own free will and on her own terms--in ways that relate to the three dynamic functions of the brain mentioned in the book. She is teaching herself to filter out irrelevant information, study the situation, and develop meaning based responses when it comes to her dislike of getting her clothes wet and her mild fear of popping balloons. It all started about a month ago when she became interested in filling balloons with water and dashing them on the brick patio. At first, I had to tie them for her but she can now do it herself.

One day, Pamela could not pop a water balloon no matter how hard she threw it. I said, "What about jumping on it?" Without thinking she stomped on it and the balloon popped, splashing water on her pants. She stood there stunned for a few seconds and then she LAUGHED. Pamela did not even run into the house to change her clothes! Friday a week ago, Steve, Pamela, and I went to the bank on a very rainy day. The rain had stopped and I noticed as we were in the parking lot that Pamela walked in the puddles and carefully splashed water. Last spring, I remember having to be careful where I parked the car because she would take circuitous routes to avoid all puddles! 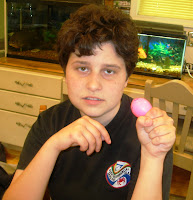 The new twist is filling air balloons. Twice last week, Pamela handed me an air balloon (that she had tied herself) and asked me to pop it. She squealed and left the room BUT she was smiling, not cringing. Yesterday at the mall, four little girls were carrying BIG balloons filled with air. Pamela squealed a bit at the sight of four ready-to-pop-at-any-moment beasts but had a wide, curious smile on her face. Pamela even drew a face in a pink balloon and named it Wormy!
Posted by walking at 07:27

Yowee! Not what I want to drive with! Elf's thing is crowds and people touching his craft materials. And things not being the same every. single. day.

We have gotten to where weekends and maybe an occasional vacation day are ok, but I don't want to take him away for a week without any schoolwork. I need to think about how to help Elf figure out what he needs. Hm.

She's making tremendous strides! I love the way you describe these triumphs in your ordinary everyday lives. Thanks for being so dang inspiring. ;-)

i love that car story. she is really doing GREAT!

That is incredible Tammy. I feel so happy for you and Pamela. Balloons are strictly off limits in our house. They are too unpredictable.

Same here! I knew something was up when Pamela would snatch a bag of balloons when we went shopping one day!