The Skunk and Arctic Animals

For about a month, Pamela and I have been narrating episodes of her life with the hopes of coding coherent memories with meaning and feeling. Life has been so hectic, I have not had much time to blog it. Sometimes, we watch a video of the activity and talk about it before doing the narration (when we made laundry soap). Sometimes, we sequence and review pictures. 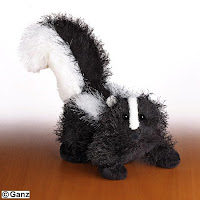 A few weeks back, we visited the bookstore at the mall to spend Pamela's Easter money. Later, I asked Pamela to tell what happened like a story ,but she did not know exactly what I meant and fell back on her power words, which Word analyzed as 19 words with 3.1 words per chunk (those aren't exactly sentences):

Skunk in a room. The skunk was great. The animals were great. The book was good. CD David. Pay. 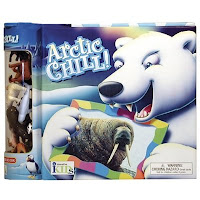 I thought she might catch on if we fell back on the question-and-answer syntax we practiced in the association method. I asked Pamela a question and she answered in a complete sentence. Stringing all of her questions together constructed sentences that Word analyzed as 25 words with 4.1 words per sentence:

I realized that, when I framed the questions for the sentences above, I was doing all of the thinking and this is nothing more than me getting Pamela to think in a prompt-response format, a static measure of her understanding. My goal for her is to come up with something dynamic, the product of Pamela contemplating the highs and lows, unique moments, lessons learned, feelings (good, bad, and ugly). To scaffold this, I came up with a process for reviewing pictures:

* I either take pictures of items or I export and print pictures from the original digital recording.

* I print a filmstrip graphic organizer to frame the selection of the six most meaningful pictures.

* I try to have on hand more than six pictures so that Pamela has to pick out the most important details for her oral narration.

* I also wrote words on cut-up index cards to help Pamela with transitions: first, next, then, and then, after that, and finally.

* Pamela and I take turns selecting six pictures and narrating the episode to spotlight how people recall different moments from the same event.

* Sometimes, I alter her filmstrip only slightly or narrate what she picked in my own words to spotlight that people can tell the same story differently. 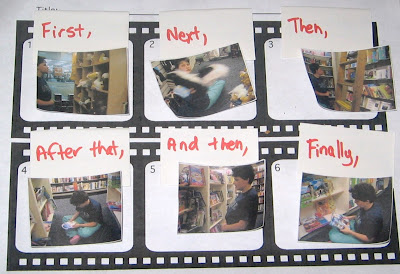 The following video shows how we worked on this together.

My goal was for Pamela to narrate the visit to the bookstore coherently with complete sentences. Before she retells the episode, I put away all pictures so she can rely on pure memory. Her final narration of the story in the video below shows how well we succeeded, 42 words at 6.0 words per sentence:

We have reviewed pictures to narrate a variety of activities. I introduced the idea of using days of the week for Steve's parents' visit at Easter. To practice thinking meaning, I pulled together several episodes in which Pamela found things including the toys she bought at the bookstore and the missing cheese. We even narrated planting seeds, which I promise I will blog this week, by sequencing and reviewing pictures.

Saturday, they found the cheese. Thursday, David helped the blanket. They helped the skunk. Then, I founds some toys and book. Finally, I did a great job.

On impulse, I bought a a cute little DK game called Silly Sentences. I did not do anything formal here. We just put together sentences, some serious and some silly. Pamela felt a little overcome with joy when I started to put together, "A crocodile ate a clock" because she thought of the Tick-Tock croc from Peter Pan. She covered her ears, hummed, and replaced clock with flower. Our goal was the pure delight of putting together words, so I left it as is. Pamela thought of the sentences that reminded us of her favorite book by Eric Carle, The Very Hungry Caterpillar, and fairy tale princesses. I put in some silly adjectives as a preview to including more descriptive words in her narrations down the road. 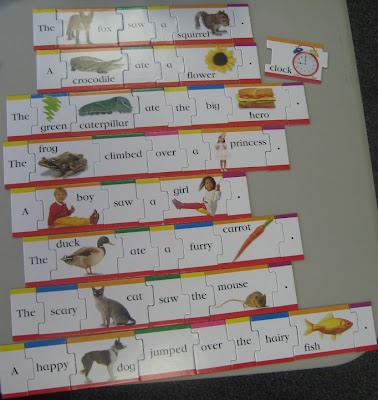 Have you seen Write Shop's Story Builders? Write Shop's Book C might be something for you to consider when it is published. I began beta testing it, and we had to stop when A. had that allergic reaction that held us back for over a month. I loved what I saw of the beta test--really nice progression of assisting a child in formulating ideas.

I love that Silly Sentences game! I may have to hunt one down. ;D

I really love your narration methods! I also like that silly sentences game. I made up something similar (which I also called silly sentences), when Sarah was 4, to work on pre-reading skills. We had so much fun with it!

I wish the Silly Sentences game had more verbs . . .