Original Research on the Teaching of Spanish

In her first book, Charlotte Mason discusses the teaching of a child's first foreign language through the ear first!

The child should never see French words in print until he has learned to say them with as much ease and readiness as if they were English. The desire to give printed combinations of letters the sounds they would bear in English words is the real cause of our national difficulty in pronouncing French. Again, the child's vocabulary should increase steadily, say, at the rate of half a dozen words a day. Think of fifteen hundred words in a year! The child who has that number of words, and knows how to apply them, can speak French. (Volume 1, page 302)

Pamela is a visual learner with a history of severe auditory processing issues and aphasia. I was very skeptical about teaching Spanish without the printed word, much less at a rate of a dozen words per day. Last month, I described how I overcame my doubt of ear only methods when Pamela learned new Spanish words without seeing them in print. I alluded to mulling through Phase II of our experiments with Spanish and, today, I will reveal our new plan.

At first, I feared we were reinventing the wheel. Rosetta Stone works like the series mentioned by Gouin. The software shows the printed sentences, which is what I am trying to avoid! Lara, a Texan homeschooler interested in Charlotte Mason's ideas, highly recommends Rosetta Stone, but she too is supplementing with the idea of Gouin's series. I would like to hold off on pricey software until we have gotten Spanish into Pamela's ear (and mine). The Easy Spanish claims to follow Mason and Gouin but relies on the printed word in the first year of learning Spanish.

In Gouin's method, you teach language in a series of sentences about a topic familiar to the child: usually, a process somebody does or a pattern from nature. He called these "the series" which could be everything from the growth of a plant to the grinding of corn in a mill, or making as sandwich as Lara suggests. Charlotte Mason wrote,

You think the thing out in the order of time and natural sequence; you get the right verbs, nouns, and such epithets as are necessary, follow suit, and in amazingly few sentences, very short sentences too, connected by 'and,' you have said all that is essential to the subject. The whole thing is a constant surprise, like the children's game which unearths the most extraordinary and out-of-the-way thing you can think of by means of a dozen or so questions. . . You really learn to think in the new language, because you have no more than vague impressions about these acts or facts in your mother tongue. You order your thoughts in the new language, and, having done so, the words which express these are an inalienable possession. Volume 1 page 303-304

Steve is a native speaker of Spanish, but he is also un hombre de negocios (a businessman). He works long hours and travels often enough to be inconsistent in teaching Pamela Spanish. I brainstormed a way to scaffold him and make the most efficient use of his time. Here is the process:

Steve is my father. He is a businessman. He gets up early. He drinks coffee. He works on the computer. He runs five miles. He takes a shower. He wears a shirt and pants. He drives to the office in a gray car.

Then, I translated it into butchered Spanish with the help of babelish and cleaned up what I knew to be wrong (too many pronouns which are not needed in the subject of Spanish sentences). I emailed a copy to Steve, which he edited very quickly and emailed back:

Before Steve left for work one morning, I grabbed the video camera. I filmed us going back and forth through the series. I read a sentence in Spanish to him so he would have the exact script and he repeated it. We went through the entire series in less than five minutes.

I took some pictures and loaded them into Windows Movie Maker (which I use often to edit RDI videos). I pulled the audio from the film of Steve saying the sentences and married Steve's oral sentences (which I edited to repeat twice with a long pause) to the pictures. The following video was our virtual Steve to help us practice 10 minutes a day while he was at work or in Chile or China or upstairs taking a nap!


I put the pictures and written sentences in Excel to help me practice with Pamela and keep track of what we have studied. One side has the pictures only with no written words, while the other side has sentences only. After a few days, I would read a sentence aloud in Spanish and let her pick the picture that went with the sentence. At no time do I have her view or read the printed sentences! 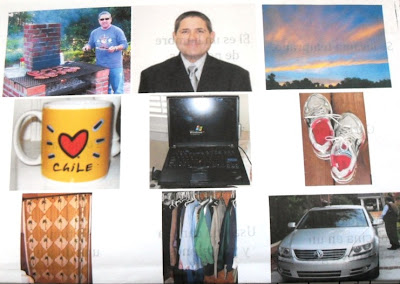 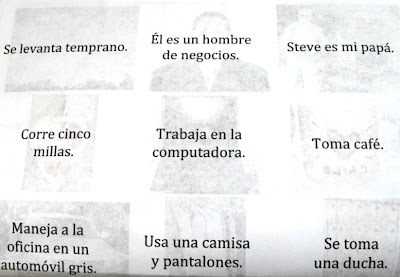 When she was ready, Steve did the same and we have a video of their interaction.


I was pleased at how much Pamela imitated her father in the video. Since my goal is to help get Spanish in our ears, I am not focused on speaking Spanish, which is the next step because we are trying to follow the progression of typical language progression as described in this paper. Any Spanish Pamela speaks right now is gravy and we will postpone any focus on combining words until we have a year of hearing Spanish under our belts.
Posted by walking at 04:54

Email ThisBlogThis!Share to TwitterShare to FacebookShare to Pinterest
Labels: Spanish

Thank you! Thank you! This is just exactly what I needed to kick me over the edge from dabbling to actually teaching my boys Spanish. I can't afford to pay for a native spanish tutor everyday but I could once a week and then use my video camera. Eureka! Thank you so much!!! ~ LeAnn

LeAnn, Jenn's work has gotten me fired up over this! In lieu of having a French mistress, I live with a Spanish gentleman . . . LOL

I was trying to outline a process that might work for any family who can have infrequent access to a native speaker. I have to pin down mine to do two stories before he leaves on a ten-day trip to China . .

Golly gee Tammy, you were featured in the Simply Charlotte Mason newsletter! What a famous woman you are. I did enjoy this post, I've been mulling over it in my mind...

I suppose I do have a dad who speaks spanish although he says he doesn't speak it well (don't believe that) and he lives 2 houses over.

I'll have to read your post again and then see what I can scheme up. ;)

Too funny!!!!! Julee, you and I have something in common with Sonya--we all have children with autism. Her Intentional Parents website posted the chart that turned a light bulb on in my brain and encouraged me to try RDI!

Pamela likes repeating the videos and it is not all echolalia. We have been playing word games like
"Toma cafe"
"Toma agua"
"Toma leche"
"Toma Coca-cola"

The other day we saw this outlandish pink and purple car and I said, "Veo automovil morado y rosado." Pamela knew what I was talking about!

Update One:
Pamela figured out how to say, "Tammy es mi mama", on her own by cleverly substituting words in a sentence she already knew, "Steve es mi papa"--very slick for a person with life-long aphasia!

Update Two:
Steve was traveling and David wanted to know when he would return. He tried to find a way to ask without getting Pamela riled up over schedule things.

I guess David will have to use pig Latin next time.

Update Three:
This morning I picked up a coffee cup and Pamela said, "Toma cafe." I repeated her, "Toma cafe", and drank, knowing it was cold. Then, I wrinkled my nose and said, "Es frio." She laughed and said, "It's cold, just like los pollitos."

Pamela knows that temprano means early and has been asking her dad how to say sunrise and sunset in Spanish!

This is exactly what I have been looking for, we do CM and I was looking for a low cost, CM friendly use of our time set aside for Spanish. My mother is a native Speaker and I have string comprehension of Spanish but rarely speak it, I think this will be a great way to teach it and for both Daughter and I to use it in everyday conversation. thank you for this blog post!!!