How the Grippe Stole Easter . . . Almost 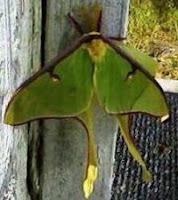 It all started Wednesday, a fine spring day. Pamela and I delivered three and twenty meals on wheels. Along the way, we met a lovely little luna moth, our first ever, and we finally understood why they enchanted Oliver so much in The Four-Story Mistake.

Near the end of our journey, my eyes grew a bit watery, but it could have been the pine pollen, coating everything until it looked like some fairy had been a little too heavy with yellow pixie dust or a giantess in T-ville had opened a bag of cornmeal that blew up in her face and covered the county. The last two houses were smoky between the occupants with a fondness for tobacco and a wood stove. I chalked it off to the remains of the day. 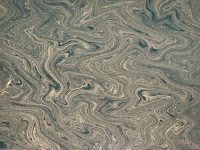 By the time I picked David up from school, fits of sneezing attacked me, quite capable of building six-pack abs in a few days. The drippy eyes and itchy throat pointed to seasonal allergies, so I grabbed a lemon-berry slushie from Sonic for comfort. We zipped through Wallie world for some OTC allergy medications, purchased only for the spring onslaught. [Photo Credit: Brenda at Lee's House of Monograms]

Later, I headed off to Bible study as usual with an extra supply of tissue. The sneezing grew worse, and my head began to spin ever so slightly. The rather large fellowship hall grew hotter and hotter, so I began to wonder about hot flashes. My mind wandered and I could not track the lively discussion about the book The Prodigal God. I got out of there as soon as possible, went home, and collapsed into bed.

Alternating between couch and bed, I slept until Saturday morning at noon, except for necessary duties. With Steve in Illinois through last Thursday night. . . dogs . . . David . . . noodles for Pamela . . . a load of laundry . . . dishes. . . in between head aches . . . muscle aches . . . pains . . . chills . . . fever. I made one trip to Wallie world for Edy's fruit bars (miraculous stuff), broth, chicken noodle soup, tissue, juice, and toilet paper (we were out). I belong to the old school of flu-fighting. If you have a healthy immune system, then God's little white soldiers do their duty. Fevers are for killing nasty things in your body. Eruptions of mucous are for those little nasties that can make a hasty retreat. Tiredness is to force you to stay in bed where you belong. Two to three days of absolute misery avoids two to three weeks of bronchitis. And, when the grippe grabs you Wednesday and you have to sing on Sunday, no pain, no gain!

We took things slow and easy on Saturday, doing a little in between catnaps. Before heading to bed early, I stumbled upon something on youtube that got me into the Easter spirit: recordings of Handel's Messiah with a score that scrolls along with the music. I selected the brilliant Amen chorus and could not resist softly singing the alto line which I have memorized except for a few snarky parts that these nifty little videos might solve! And beneath all that mucus lay my voice. With careful cough management, I could sing as high as an F, all that was needed for choir. I prayed to God to give me a sign at the Easter sunrise service. If I could sing the hymns without collapsing into a coughing spell, then I would take it as His blessing for singing at the indoor service.

Before dawn, I emerged out of my house, blinking like Rip van Winkle at the fairyland near my house. The pink, magenta, and red azaleas had bloomed as did the sunny Carolina jasmine. The carefully cropped wisteria waved at us, wafting its sweet perfume. The weather was picture perfect, not too hot and not too cold. The cool fresh air soothed my face. Spring had sneaked up behind my back while I was sleeping through April Fool's Day, Maundy Thursday, World Autism Day, and Good Friday. 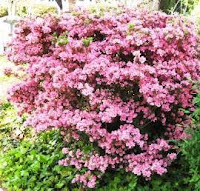 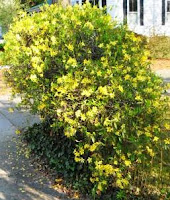 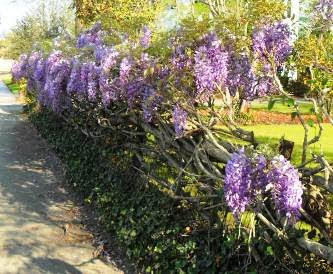 Farm fields surround our church on three sides, so the setting was gorgeous, mist blanketed the fields, a light blue sky that blushed in the spot where the sun would debut. Just as the pastor started speaking, as if on cue, a large flock of geese flew in V-formation overhead. From time to time, cardinals and mockingbirds serenaded us, crows crackled, and cows made their presence known. Another flock of geese headed into the pink beam when the sermon began. The pastor talked about the burning hope flooding the hearts of different disciples with joy as the good news spread, and the sun appeared on the horizon, also burning and flooding our hearts. All of creation celebrated Easter with us. The birds and cows sang the last hymn, and I did too! After sharing breakfast in the fellowship hall, we headed home. Steve ran, and I recovered and felt good enough to sing with the choir. Again, singing the joyful music flooded my heart with gratitude. 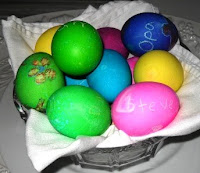 Easter is about relationships, the horizontal relationships with our dear ones. My husband did not fuss because I had no goodies. My son had patiently took on extra duties when I was too woozy to get off the couch. My daughter showed absolute resilience and compassion by not freaking out by this unexpected disruption of the holiday. We shook on it that we would color the Easter eggs on Monday (and we did). My parents who normally coordinate with us in preparing a scrumptious banquet had worn themselves out gardening, and we contented ourselves with sharing a pizza instead. My choirmates exclaimed, "We missed you Thursday and are glad you are able to sing this morning!"--particularly striking since I was the most under-dressed person in church that morning: all I had energy for was throwing on my black outfit, boots, a necklace. Makeup was beyond me.

At the formal service, our pastor spoke on our vertical relationship with God (Father, Son, and Holy Spirit). No matter what happens in this short, difficult life, whether it's autism, the flu, traveling husbands, etc., we have hope for a better life in eternity: not because of anything we have done. If left up to me and my ability and my accomplishments, I would be hopeless. Even though my plans for Easter amounted to nothing, Sunday was an awesome day for this reason:

We have peace with God through our Lord Jesus Christ, through whom we have gained access by faith into this grace in which we now stand. And we rejoice in the hope of the glory of God. Not only so, but we also rejoice in our sufferings, because we know that suffering produces perseverance; perseverance, character; and character, hope. And hope does not disappoint us, because God has poured out his love into our hearts by the Holy Spirit, whom he has given us. You see, at just the right time, when we were still powerless, Christ died for the ungodly. Romans 5:1-6

Email ThisBlogThis!Share to TwitterShare to FacebookShare to Pinterest
Labels: faith

*whew* and Pamela was ok with it, too, had to be the biggest blessing of all. Feeling woozy myself reading your travails, bless you.

I have nothing to say but a big ole
AMEN! Rhonda