They Say It's Your Birthday! 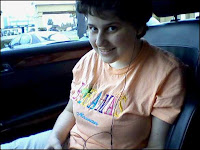 Like most typical young adults, Pamela loves her music: classical (Tchaikovsky, Mozart, Bach), disco, jazz, Basia, and the Beatles. Two years ago, she designated herself as the music navigator in the car. Then, she started listening to iTunes on the computer and eventually borrowing iPods from her brother or Dad. Did she ask for an iPod for her birthday? No! Pamela is way more savvy than that! She requested an iPhone. Since she rarely talks on the phone, we compromised and gave her an iPod Touch! 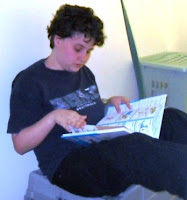 Autism is a funny thing because development is so scattered. Pamela is chronologically an adult, but her dynamic thinking is like a toddler. Even though she reads books at a 5th/6th grade level, she enjoys reading picture books, which are at the same level as her expressive language. On top of that, she can do one thing most people will never do: memorized calendars. She can tell you the day of the week you were born, given your birthday and year. The key to teaching a person with such varied abilities is to work in the zone of proximal development (where she is in that particular area). Her dynamic thinking, which drives her social and emotional development, did not take off until we started focusing on infant level milestones three years ago. Rather than worry about being so far behind, I am thrilled with how far she has come: instead of thinking like an infant, she thinks like a toddler!

The Friday before Pamela's birthday, Steve could not help himself. He bought an iPod Touch and could not wait until March 23 to give it to her. He decided to play a trick on Pamela by telling her he had bought a collection of DVDs instead. He kept it very short, and the moment she saw her real present, Pamela went from pulling at her shirt nervously to clasping her hands with wonder to flapping her hands while running a victory lap. The next day, the two of them shopped at Barnes and Nobles where Pamela picked up The Cat in the Hat Beginner Book Dictionary to replace the battered one we bought fifteen years ago. 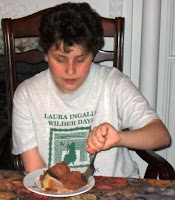 Monday night, Pamela's birthday eve, we invited my parents over for some cake and ice cream (all within the boundaries of her special diet). Steve had to travel on her birthday, so we celebrated it early. Birthdays generate so much excitement that Pamela plugs her ears before we start singing. We also keep our sense of humor intact for moments like Pamela opening a musical card and closing it after five seconds. Fortunately, the book A Treasury of Curious George fared better. If she does not like a present, she will express herself clearly. Fortunately, she liked all her gifts this year, except for the check from her grandparents in Louisiana, which she accidentally ripped up when opening the mail! 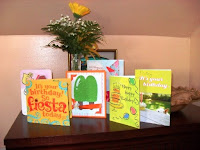 Her third birthday gig was on her real birthday. I brought brownies and ice cream to her watercolor class, and her classmates gave her cards and a vase of flowers! Their sweet gesture touched my heart, but Pamela was not quite sure of how to react. Since she has never received flowers before, she did not gush like a typical twenty-one-year-old female would. However, she opened the handmade card, looked at it carefully, and put it to her ear to see if it would sing to her. Later, I explained to her classmate that Pamela gets overwhelmed by presents and reacts unpredictably, sometimes, flat and underwhelmed and, at other times, flapping and overwhelmed. Her outward behavior does not always reflect how she truly feels.

All in all her birthday was wonderful!
Posted by walking at 11:26

Interesting idea about the picture books... I have noticed G gravitates toward those as well. I keep telling the school he never reads except for baby books (if that), and they keep telling me he tests at a fifth grade level.

Happy Birthday, Pamela!
-Phyllis and all the rest of the Bergenholtz gang (and don't worry...this won't sing at you either...I understand, my Alex doesn't like singing cards either.)

I didn't realize Sarah & Pamela's birthdays were so close together! Sarah's was yesterday.

Mrs. C, Reading is more than comprehension. I believe that social and emotional level and expressive language level play a role in the books that delight a child.

Sherri, I always imagined Sarah to be older because she seemed much more high functioning. Happy Birthday to Sarah, too!!!!