Our Plan for the Year: Architecture

Yes, architecture is part of the curriculum, albeit a small part. When you think about it, we should study architecture because none of us can escape it. We live in a small rural town and, even though we would have to drive over an hour-and-a-half one way to see a masterpiece on canvas, we can walk around the block and see some of the architecture we are studying! Architecture builds a sense of beauty that is concrete and personal. Architecture is local and part of our daily lives. Charlotte Mason wrote,

Leonardo knew nothing about Art for Art's sake, that shibboleth of yesterday, nor did our own Christopher Wren, also a great mathematician and master of much and various knowledge, to whom architecture was rather a by-the-way interest, and yet he built St. Paul's. What an irreparable loss we had when that plan of his for a beautiful and spacious London was flung aside because it would cost too much to carry it out! Just so of our parsimony do we fling aside the minds of the children of our country, also capable of being wrought into pleasaunces of delight, structures of utility and beauty, at a pitifully trifling cost. (Page 54)

Later, she quoted a letter from a parent describing a few days spent in London with her eleven-year-old daughter, "Mother took her to Westminster Abbey one afternoon and while I was seeing her to bed she told me all the things she had noticed there which they had been hearing about in 'architecture' this term. She loves 'architecture.'" (Page 77) In the next paragraph, Mason reflected, "It will be noticed that the child is educating herself; her friends merely take her to see the things she knows about and she tells what she has read, a quite different matter from the act of pouring information down the throats of the unhappy children who are taken to visit our national treasure houses." 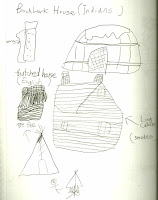 The first week of school we started learning about the kinds of buildings used in the colonies and by the Native Americans. Pamela drew these illustrations. Granted, we have none of these structures in our town. However, Pamela has been in several log cabins and a teepee and has enough context to fill in the gaps.

Our text is by an author who writes with the kind of voice that tickles the ears of children (and, therefore, delights the teachers who use it). He knows how to spin a story in such a delightful way that children forget that history is supposed to be boring. History, poorly taught, is boring.

We explore architecture in several ways. When Pamela and I walk, sometimes we look for things we are studying. A few weeks ago, we concentrated on building her sense of direction. She is fairly secure in knowing which way is north, south, east, and west. Last week, we started talking about the clouds that are in the sky (sticking with the basics for now, cumulus, cirrus, and stratus). One day a few weeks back, we read that Gothic architecture was the first style tried in the colonies. Pamela drew a picture of St. Luke's Church in Smithfield, VA, one of oldest churches in the United States. Then, we went on a walk and looked at a Gothic church around the block from our house. 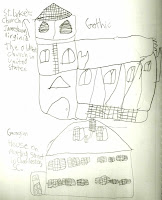 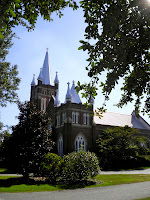 Last week, we started reading about Georgian Colonial architecture which the colonists favored once they started receiving architecture books from England. Pamela immediately connected the name to King George for she is studying King George III in one biography and King George IV in another. I downloaded a picture of this style of house on Meeting Street in Charleston, which Pamela drew in the picture above. You can see her drawing it into the following photograph on the left. Again, we found a Georgian Colonial house, just down the oak-lined street where we saw the Gothic church. 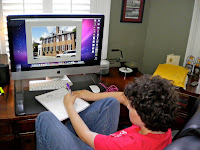 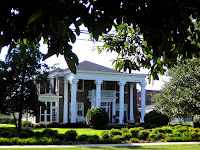 This week, we started reading about specific features of Georgian Colonial architecture. I zeroed in on the transom windows to make it personal. Pamela loves our house, which is a Victorian-style house built in the Edwardian era. Our front door has a transom window, and our back door has double transom windows, which Pamela drew beautifully. We walked the neighborhood and found several houses with a wide variety of arrangements of transom windows. It took some time, but we finally spotted the illusive Georgian fanlight (it helped that I had already secured the location on a top-secret advanced scouting party). 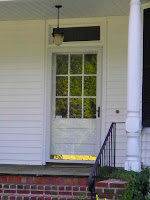 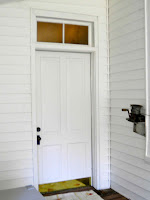 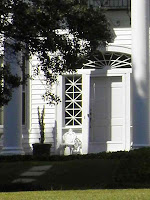 We have very modest goals for reading the book on architecture: three chapters that cover the time period we are studying in history. Because Pamela developed an interest in all things B.C. last year, I decided to strike while the iron is hot and we are reading the first eight chapters of the architecture book to supplement our readings on ancient history. Typically, one would not cover both in the same year. We are not a typical family if you haven't noticed.

P. S. Not that I'm making excuses about my lack of postings in the past week, but my mind was working through the details of a blog post for ChildLightUSA in case you are interested.
Posted by walking at 20:00