Our Plan for the Year: Spanish

While I was checking my email this morning, I heard a wonderful thing. Pamela was repeating bits of Spanish that she is picking up from our Spanish program. "Ay, ay, ay! Sopa esta muy caliente!" which means, "Ouch! The soup is very hot!" We only spend about fifteen minutes a day doing formal Spanish. We can do this because we are focusing on only two aspects of acquiring language, hearing and speaking. We are trying to model how infants learn a language: they hear us talking and, before long, they start speaking. Reading and writing comes long after the ear has acquired the language.

Pamela really wants to learn Spanish. Her dad is a native speaker as is his side of the family. They are fluent in English and Spanish, and Pamela is very excited that we will be spending a week in El Salvador with them next month. She has tías, tíos, primos, and primas on one side of the family (Steve's) and aunts, uncles, and cousins on the other. To mix it up even more, Steve's parents are Grandpa and Grandma (born in Louisiana and England respectively) and mine are Opa and Oma (born in North Carolina and Germany). One of my sisters spent many years getting advanced degrees in winemaking in Germany, speaks the language fluently, and is a winemaker in Texas.

I do not speak Spanish, but we have found a way around my impediment that is working: (1) Latin American nursery songs, (2) homemade stories narrated by Steve about family, pets, daily activities, etc. and what she is learning in science, and (3) audio books (the printed books are kept away from her sight). Last year, we stumbled upon this plan for teaching Spanish and I will probably spend the next two years building Pamela's ear for Spanish before moving onto a formal curriculum. Last year, I wrote two rather long posts here and here.

Working with other Charlotte Mason educators on a curriculum project inspired this unique approach. Mason based her ideas upon the work of Francois Gouin's The Art of Teaching and Studying Language, which emphasized the importance of hearing and speaking a foreign language before seeing it in print or writing in it. Other parents interested in the ideas of Gouin and Mason are also attempting this approach from French in Montreal to Spanish in Texas. One mom in Texas (ahem, NOT Massachusetts) did a fabulous job of outlining Charlotte Mason's understanding of Gouin and how it matured in the years between her volumes.

We are learning Latin American nursery songs that my husband learned as a child. You may be asking yourself how effective nursery songs are. Well, the other day, I sang, "Food, glorious food," while David was feeding the fish. Pamela walked in and said, "La comida," a word she learned from Los Pollitos.

Charlotte Mason believed in making curricula personal, so Steve and I are developing videos and audio recordings focused on our family, pets, home, and daily activities. Pamela spent three weeks learning how to talk about her brother David and now she is learning about me. Again, you may be wondering how effective this is. Last year, she learned a story about her dad and loved saying, "Maneja a la oficina en un automóvil gris." After Steve wrecked the gray car, he replaced it with un automóvile anaranjado and Pamela easily amended her Spanish. When he replaced the red commuter car with a white one, it became un automóvil blanco. Pamela had no problem learning a new sentence about David driving to school, "Maneja el auto a la escuela." Not only that, last month while driving home from visiting my uncle in North Carolina, we had the following exchange:

Pamela asked, "What is cero?"

I answered, "Cero is zero."

Do you realize how incredible this is coming from some still learning English as a first language, who has struggled with aphasia all of her life? Pamela adapted from a sentence she learned last year, "Corre cinco millas," to make a joke. She laughed because she was talking about her running habits which are very different from those of her fathers. Here are the two videos we made about David and I.

We also write stories about what Pamela is learning in science. Here are the two videos we made about a butterfly and a pear:

In addition to hearing homemade stories, we also plan to listen to three audio books read by native speakers of Spanish during the school year: Ricitos de Oro y los tres osos, La Caperucita Roja, and Los Zapaticos de Rosa. This takes a bit of work, but it is worth it! I break up the book into eleven weeks (the length of a trimester). I ripped the track from the audio CD and make clips of vocabulary words for the week. Then, I break the reading into clips of phrases. I create an audio file of vocabulary words (with pauses), the story broken up into small phrases with pauses, and then the story itself. Every week, I start on page one and work up to the current week. Next week, we will be covering pages one through twelve. I put the audio file onto the CD with the nursery songs and homemade stories for that week.

Then, I scan in pages from the book to extract images to create several pages to support what we are hearing. I include no Spanish words. While we listen to the audio recording, Pamela points to the proper image. Is it working? Heck yeah! We started this process three weeks ago and, in the past three weeks, Pamela has learned new words effortlessly: oso, plato hondo, grande, mediano, pequeño, sopa, and caliente. Even though the recording is a tad cheesy, she loves it! That sentence she repeated this morning was from the recording. 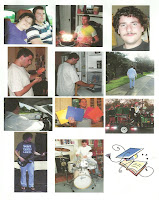 So what does a Spanish lesson look like? To make things simple, I put all of the Spanish songs and stories for the week on one audio CD so that we can sit on the couch and play it on our CD player, taking advantage of the remote control. When we have to be out and about, Pamela can do her Spanish lesson in the car because we can pack up the CD and folder and "vaminos"!

First, we sing the new song twice and sing an oldie but goodie chosen by Pamela. We sing the songs based upon what we hear without any lyrics in front of us. Then, we listen to one of two things: the homemade series stories (a personal story and a science story) or the professionally done children's story. I have pages to go along with each story, so that we can point to pictures as we are listening to the audio and repeating what we hear. I keep the new and old videos on my desktop in case Pamela wants to watch them in her free time. Occasionally she does.

By the way, Spanish falls under the knowledge of man, which is the final area of knowledge to be covered in our plan. In the right column of my blog, I have put an outline of our curriculum with links to the posts plus a section of hints and tips.
Posted by walking at 08:33

Email ThisBlogThis!Share to TwitterShare to FacebookShare to Pinterest
Labels: Spanish

Tammy, I love that you divide your curriculae up into the three important areas! Knowledge of God, Knowledge of Man, and Knowledge of the Universe. Thanks for the Gouin Hat Tip. It is amazing what passes as "Charlotte Mason" in the FL field.

Alright...off to check the Winemaker in Texas that speaks German. German is my third language, but sadly, I have not been able to use it much these last two decades, so have lost quite a bit. Many useful phrases atill abide (buying train tickets, stamps, grocery shopping...simply b/c those were the ones needed when I lived there on a missions team).

p.s. I know it seems like I am in New England. Well, we used to live there, and *love* to visit. We are actually in Texas, not too far from our piano teacher/CM/AO friend Katie B. and friend Queen Shenanay. :-). I've had the blessing of having both of their daughters in my classes.

Last comment today, I promise :-). My bookclub and the ladies had a CM/AO day last weekend for newbies. Here is my compiled, practical notes (probably my most succint to date). The simplest Gouin example plus links for storytelling and mini-novels, which I work my students up to pretty quickly. They are amazing for in-class discussion in the target language, and oral narration. Yes, I do believe I have finally spilled my best secrets. Uh Oh. ;-)

Never fear, Javamom. So many people are skeptical and will learn the hard way. Everyone else throws kids into reading and writing in a foreign language the first year, so it has to be right! :-)