Mele Kalikamaka and All That

I hate to say it but we had a mixed Christmas. Leading up to the day was hectic between singing gigs (four on December 19 including the fun off singing Mele Kalikimaka while wearing leis), parties, and a bonfire. Besides homeschooling, helping to design a website for my church distracted me too.

It all started out well on Christmas Eve. We attended a "candles in the round" service, which alternated reading Bible passages on the birth of Jesus and beloved Christmas carols. Then everyone gathered near the front of the church in a circle for the candle lighting. Pamela had not attended a service like this in eons, so, when the deacons flipped off the lights, Pamela asked rather loudly, "Is the power out?" She didn't want her candle lit and was fine until Steve tried. She said, "Don't burn me!" and he gave up. Yep, she is finally saying those funny little things that kids say in church about twenty years late. I am so glad we have a relaxed, loving church family who rolls with the punches when kids of any age speak their mind. It was a beautiful service, outbursts and all. 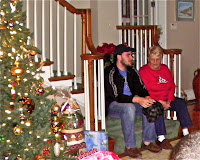 After church we headed to my folks house. We didn't have to go over the meadows and through the woods to get to grandmother's house. We just walked across the street. We saw my brother (who is in the Navy) and his family plus my local brother (and three friends that he brought unannounced). My mom made homemade pizza but not enough for everyone but baked some frozen ones so she managed). 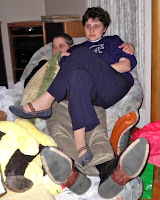 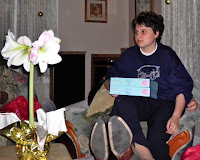 We had a lot of laughs. How could you not laugh with the dynamic duo David and Daniel! 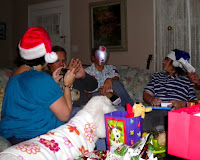 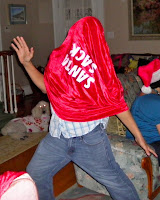 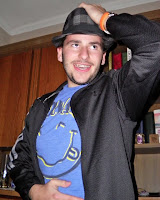 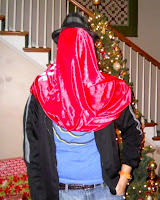 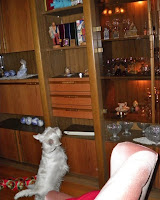 Oliver, my brother's westy, was a mess. He fell in love with a blue squeak pig and would do anything to get to it. The poor guy tried all sorts of maneuvers to get at the toy when we put it on the top shelf. He has a very good sense of object permanence apparently.

We stayed up late, talking into the night. Because the kids opened the presents the night before (a family tradition), I slept in until 9:30! I spent part of the morning cooking food for Pamela. Mom wanted to try something different for Christmas dinner, so she chose goulash. She didn't add flour until the very end and set aside a flourless portion for Pamela. I made a gluten-free version of the tradition noodles used for this dish: nockerl. Since some folks were on low-carbohydrate noodles, I chose soy flour as one of the flours to make it an alternative for others. The other flour had on hand was sorghum and the nockerl were quite tasty the next day when I recycled the leftovers with spaghetti sauce and hamburger meat. For dessert, I baked a gluten-free, casein-free impossibly easy coconut pie that was absolutely delicious. I tweaked the recipe by using coconut milk for the milk, Earth balance butter, and frozen coconut (not the dried, flakes kind) and cutting down the sugar to half a cup because we like our sweets less sweet.

After dinner, we opened the adult gifts. Steve played disk jockey, and we listened to LPs (long playing records, vinyl) from the 1960s while my brother and his crew looked through old photo albums. His wife saw a few pictures of Pamela right before autism hit hard. Yes, she did look at people in the face. She did have vocal play and did the back and forth babble with us. Some of the sensory issues had already hit her for she craved vestibular stimulation (bouncing while being held) and tended to leave overcrowded noisy rooms. Her social and verbal delays were mild at that point.

Then, we taught my mother how to play Blackjack. Steve loves this game and made a most excellent dealer too. We went home at about nine and a half hour later Mom called with the awful news. My dad's surviving sibling Jerry died on Christmas Day. We knew it was coming for the doctors had diagnosed him with treatable but uncurable Stage IV lung cancer last summer. About a month ago, they stopped the treatments which were not doing much for his quality of life.

Uncle Jerry knew the Lord and we have no doubt that we will see him in Heaven. The timing stinks. Aunt Edna had already lost a daughter a couple years ago and a grandson a year after that. Now, she has lost her husband of fifty-four years on Christmas day. I cannot imagine how she will be able to get through Christmas from here on out. Only God can get you through that kind of ache.

On the other hand, it causes one to think about the real meaning behind Christmas. The babe in the manger was no ordinary child. He came here to die so that we could live. Processing the death of a loved one on Christmas day reveals the truth behind it . . .


Hail the heav'n-born Prince of Peace!
Hail the Son of Righteousness!
Light and life to all He brings
Ris'n with healing in His wings
Mild He lays His glory by
Born that man no more may die
Born to raise the sons of earth
Born to give them second birth
Hark! The herald angels sing
"Glory to the newborn King!"

Hawaiian greeting right back at you.

It was a sombre one (Pamela took care of herself so well, as she does now! I hope that never changes).

And it was a dynamic one. (the Ds were so funny and unexpected).

Great to read about your Christmas. I also had a relative die on Christmas day up in Conn. My father's sister, my aunt....I had not seen her in so many years but my older brothers had recently. Not sure where she was with the Lord , but His grace to take her on the same day her mother died over 50 years ago.

I'm sorry for your loss. We never had much contact with my uncle growing up with him in the Air Force and Dad in the Navy. But, we've seen more of him these past few years with us living within a three-hour drive.

What an amazing thing that daughter and mother died the same day, 50 years apart! I reminds me of Thomas Jefferson and John Adams died on the 50-year anniversary of the signing of the Declaration of Independence!