A Recovering Enlightenment Thinker Muses on Math Part I 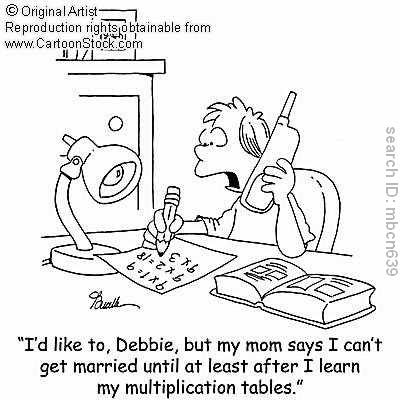 When people hear I am a math person, they often tell me how horrible they were at math in school with a hang-dog look on their face. Nearly all are stars in their own right: gifted speakers, talented musicians, skilled craftsman, original thinkers, etc. Although I used to feel pretty smug about my math, now I feel heart-broken that they devalue themselves because of grades. Our society has accepted an outdated system that not only teaches academics poorly but shames those who aren't able to rise to the top of the ranks.

Sir Ken Robinson's speech on changing educational paradigms will give you the context for why I am a recovering Enlightenment thinker. This version is particularly engaging because someone has illustrated his talk beautifully. Enlightenment thinkers designed our education system for an industrialized economy. They assumed there were two kinds of people: academics (smart people) and non-academics (non-smart people). While the current system works great for geeks like me, it has created chaos for others.

You may not have thought through carefully the links between schools and a factory. Schools are run on schedules and ringing bells. Instruction is specialized into specific subjects. Students are measured for conformity to specific standards. Students and schools are graded. Students themselves are churned out in batches based on age, which, as Robinson brilliantly noted is sorting students by their date of manufacture.

Divergent thinking, the ability to see lots of possible answers or ways to get to an answer, has little value in a setting where conforming to a standard is the top goal. Kids learn early on that there is only one answer, and it's in the back of the book. Some researchers studied the creativity of a group of 1500 children and followed them through their school years. The tests asked questions like, "How many uses can you think of for a paper clip?" Earring, Christmas ornament hanger, money clip, etc. In Kindergarten, 98% of these children scored at the genius level. The same group of children were only 32% genius at the ages of 8-10 and only 10% by 13-15. The researchers used 200,000 adult controls and only 2% of them scored at the genius level. What happened?

I have been thinking about how the industrialization of teaching math has created a poor outcome for many of our students. Most people my age learned math through procedures and memorization, not through understanding. Think back to learning your times tables. I can remember reciting my math facts while falling asleep at night when I was in elementary school. I used flashcards to drill them into my head. I survived because I have a good memory.

Because we think that early is better, we start kids with skip-counting and repeated mental addition to kickstart the multiplication download into their brains. Even with all that preparation, kids still waver between 54 or 56 when asked for 8 x 7. Then, they fall back into skip counting and hope they land on the right answer. Then, it hit me how one concept could take a child from the early math facts all the way into algebra: partial products. Partial products allow the student to unite two knowns to figure out the known. Here is an illustration of how to apply it to the 8 x 7 conundrum: 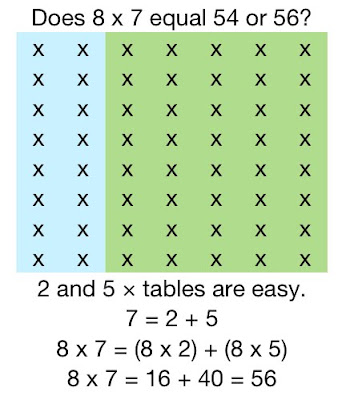 The child who gets lost in the bog of skip counting or repeated mental addition may very well find it easier to calculate that 8x2 is 16 and 8x5 is 40 and that makes 56! Even though there is one right answer, there are many and varied ways of nailing down multiplication facts.

Having trouble with the six tables? Fives and ones are very easy. Why not break them up into partial products? 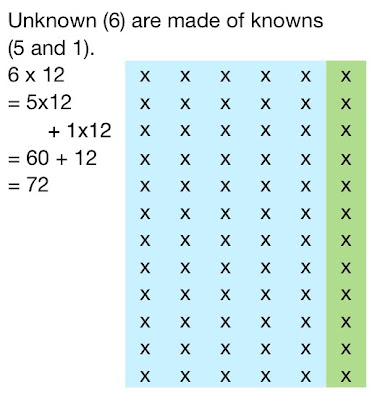 Have a one-track mind? Stick with threes! 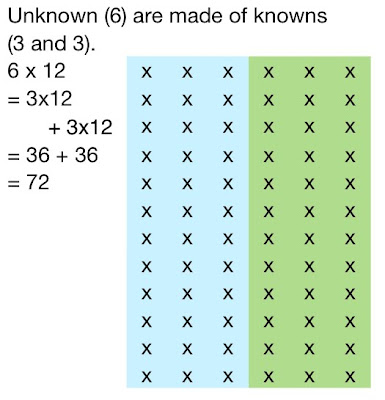 Pamela has struggled with long division for a long time. I think I finally figured out why. With addition, subtraction, and multiplication, you start with the right column and work left. With division, it is the opposite. Starting with the right column is so ingrained in her that, Pamela finds traditional long division difficult. Over the weekend, I found an alternative strategy that gets away from thinking in columns. Check out this video on partial quotient division for an illustration. The beauty of partial products is you don't have to start with any column. You think about a likely candidate. If it's not enough, you go another round. Since you don't write your answer above the line until finished, you can focus on the ones-place (right column) or the tens-place (left column) first.

Today, Pamela and I worked through four problems together. She seemed to understand it, so I assigned one problem to do solo and she did well. 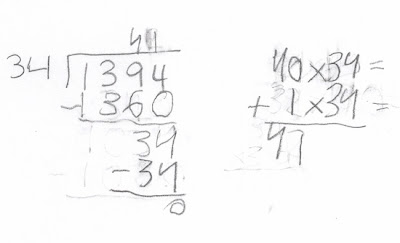 When I told her I would give her one more problems, she said, "No! Four!"

That is how much she loved the new method. Pamela correctly answered all four problems. 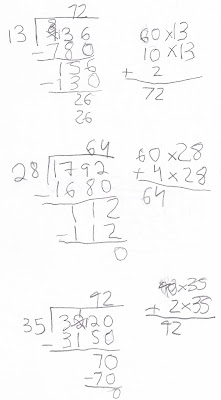 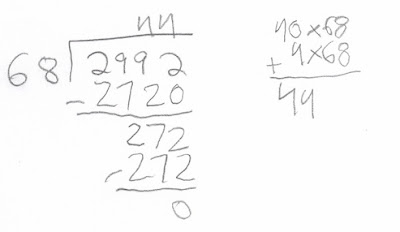 After musing about these problems, I couldn't tell if trying the partials made a difference. I gave Pamela a more complicated problem which confirms that we are on the right track. None of the erasing represents me correcting the problem. I was out shopping the whole time. 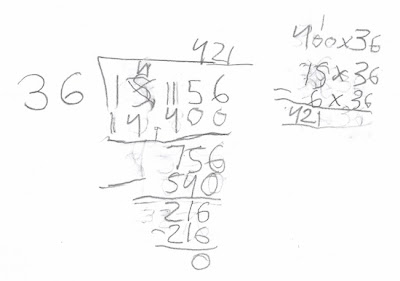 You made me think ~~~ thank you.
I loved that she loved doing more math. Some sort of light bulb went off . One of delight!

I'm sorry if I offended you with my last comment. I was DELIGHTED with her wanting to do more math. Absolutely delighted. I would assimilate to her will... resistance is futile when someone is that excited about learning! :)