When Pamela was six years old, she could only echo back what you said in the last three seconds. When she was twelve years old, she could process a word or two and cue off that, usually misunderstanding what was said, leading to a meltdown. Her auditory processing has made huge strides since then.

Yesterday, Pamela wanted to go on a health food store run. I wasn't in the mood to sit in the car for an hour, so I made an excuse about not having time for I had to put away the Christmas decorations, which were down, but not stored. Pamela eagerly joined my in wrapping and storing the ornaments and even made three trips upstairs to find the paper towels. We finished after only a half hour of effort, so I lost my excuse.

Steve joined us because I was under the weather with a slightly sore throat. We stopped at McDonald's to pick up two small cappuccinos for the road. He told us about the difficulty of the folks at the Mickey D's in Monck's Corner have with making a cappuccino without flavor. He asked, "And what do you think they added?"and paused expectantly. From the backseat, Pamela chimed in, "Flavor!"

After we made it home, Steve asked me if I was going to church. I told him it depends. David asked why. Since Pamela discourages us from talking about illness, I spelled out my dilemma with the military alphabet, "Charlie Oscar Lima Delta." Even though she was in another room, Pamela bolted into the television room to ask, "Who's Charlie Oscar?" Before long, she's going to have us speaking in pig latin . . .

When I assess what helped Pamela make such wonderful progress, I can boil it down to three things: (1) three hours a day of reading books aloud to Pamela sharpened her auditory processing, (2) three years of the association method helped her with the mechanics of language, and (3) Relationship Development Intervention enabled her to think flexibly and engage socially.

What does this have to do with exams, you ask? For me, exam week has verly little to do with blue books, bubble tests, and sharp pencils. It is about discovering what Pamela knows, how much larger her world has become, and what milestones are in the making. It is about deciding how I am doing as her guide and about changing the curricula to make it work for her. Exams include not only assessing her, but also assessing me and the curricula.

I consider her exams a resounding success:The Case for Narration
Over a hundred years ago, Charlotte Mason chose narration as the most efficient way to assess true understanding and to store new knowledge into long-term memory. Pamela didn't study for her exams. All last term, she took turns reading aloud sentences from her books and narrated what she knew. She drew maps for geography, and added drawings to her drawing notebook and drew pictures and wrote narrations for her timeline notebook. She did some nature study and experiments, recording her observations on paper. Education researchers call this "retrieval practice procedures and reconstructing knowledge."

A recent study compared the test preparation techniques of four groups. The first read a science text for five minutes. The second read the material in four consecutive five-minute study sessions (more is better, right?). The third made concept maps by filling in hand-drawn bubbles to connect ideas and concepts, the golden standard of modern study techniques. The fourth read the material, put the text away, spent ten minutes writing what they recalled in a free-form essay (what Mason called written narration), reread it, and wrote some more.

Note: Too many headlines are calling this taking a practice test. We all know that typical tests involve multiple guess and lots of WH questions. These researchers tested through essay, which is another way to say written narration, and, at least, Science Daily got it right!

These surprising results have lead to speculation about why narrating what you read works. Education professor, Marcia Linn said students in the fourth group may "recognize some gaps in their knowledge and they might revisit the ideas in the back of their mind or the front of their mind." They can "retrieve it and organize the knowledge that they have in a way that makes sense to them." Psychologist Nate Kornell stated, "Even though in the short term it may seem like a waste of time, [retrieval practice appears to] make things stick in a way that may not be used in the classroom." More importantly, "It’s going to last for the rest of their schooling, and potentially for the rest of their lives."

My favorite education psychologist Daniel Willingham concluded with the howler of the day, "It's not totally obvious that this is shovel-read--put it in the classroom and it's good to go--for educators this ought to be a big deal."

Has he not been reading my blog? Written narration has been shovel-ready for over a hundred years! I can forgive him for he wrote an important article about why stories are so effective in the classroom.

I have a very simple lesson plan for almost everything. "Tell me what we read yesterday." If she has a blank, I might give her an anchor like "Yesterday, we read about poor King Alfred. What happened to him?" If it is a completely new topic, I might tie it into something she already knows. "Do you remember the book we read about Francis Marion? Well, today, we are going to start a new one about another patriot named Thomas Sumter. Sometimes, we consult a map before a reading or copy a picture.

Then, we read. Pamela and I alternate reading sentences aloud because it improves her oral expression. When we get a reasonable chunk of reading done, she stops and narrates. Then we read more and she stops and narrates. When finished, I look for connections to my life or other books. In one book, a ship was setting sail from Port-aux-Basque, Newfoundland. I told her that I had taken a ferry from that same city to Nova Scotia when we moved back to the United States. Sometimes, Pamela will tell me her connections: John the Baptist dressed like a caveman, the Swamp Fox reminded her of the movie The Patriot, and Lot's wife turned into a sculpture.

During exam week, I tried very hard to limit questions to generic things. "What happened next?" If she is having trouble with that, I tell her the name of the chapter and usually that is enough to job her memory. Sometimes, Pamela forgets to include the name of the person, the time, or the place. If I'm not sure she knows, I might say, "I wonder where he is from" or "I don't know who you are talking about." If I am absolutely sure she knows, I ask her a more direct question.

He [Julius Caesar] was a little boy. He wasn’t strong. He was growing up so fast. He has a sword. They went to France, Spain, and England. No London bell. They want to fight the soldiers. He was strong. He was strong enough. He was fight with the enemies. They fought. They won. Caesar had an election. They had parties [she means parties Caesar held to win supporters, not political parties]. [He grew up] in Rome. [He] lived in one B.C. century.

Drawings
The new thing this year was a drawing notebook. Some of our books have diagrams and illustrations. The process of copying them into her notebook is one more way to learn. During our exam, we talked about things she had learned about the weather. I was curious to see if she understood a new vocabularly word that we had only read about, discussed incidentally, and drawn in her notebook. We never drilled it. When asked "What is precipitation?" Pamela replied, "Rain, snow, flakes, and hail."

Pamela drew two maps to illustrate two topics. She is one-third of the way through the book on the Lewis and Clark expedition. She started the journey in Pittsburgh because that is where the keelboat was built and mapped their progress so far. She also drew the plans for laying the first transatlantic cable. She hasn't finished the book yet, so the exact locations will become clearer and clearer. Pamela drew the phases of the moon too. For sculpture, she drew the Sphinx. When asked to draw a column for architecture, she pointed out the window to the column on the front porch and said, "Over there." She added the flowery flourishes at the top to be like the Egyptians. 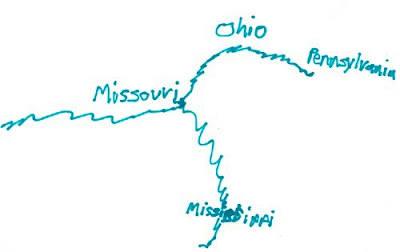 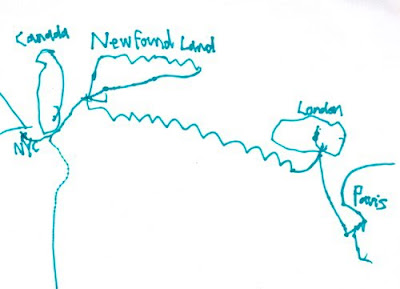 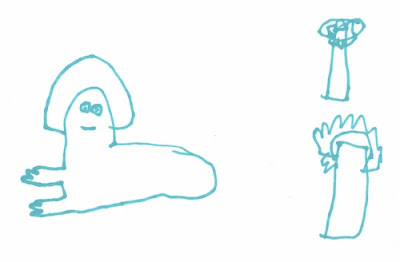