Come to the Feast!

We didn't get off to a great start last week. Sunday morning, I woke up with throbbing throat and plugged-up head. I felt bad enough to play hooky from church. I'm sure the choir will thank me later for having spared them from these miserable germs. I was well enough to launch the new term, having slightly adjusted our course after exam week. Lots of people are sick right now. Whether child or teacher is sick, we are soothed by listening to classical music, reading living books with interesting stories, studying art, and sharing poetry. Even sickly mothers like me can nurse a sore throat with a hot cup of tea sweetened with agave nectar and enjoy the feast with our kids.

How did our feast look this week? What captured Pamela's eye? What kind of delights did we sample? What relationships were renewed? What ones began? 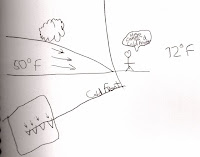 We kicked off the week with an impromptu science lesson. We have been studying vapor. Early Monday morning, Pamela was walking on the back porch in temperatures cold enough for her to see her breath. I joined her and we huffed and puffed several times. She smiled and said, "Steam!" I added, "Yes, we're making vapor." Later in the week, we breathed on glass, generated vapor with a tea kettle, and condensed vapor on a plate. Pamela wrote notes in her notebook. While walking through a wet parking lot, Pamela noticed an oil slick and asked, "Is it a rainbow?" Last month, we had read a chapter about rainbows and how sun shining through water drops make them. Seeing a rainbow on pavement caught her attention! Pamela added a cold front to her notebook. She has come a long since she thought clouds were made of cotton! 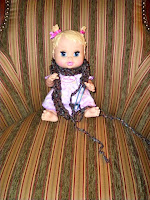 On the artsy front, Pamela nearly finished her first finger-knitted scarf for her eldest baby Baby Alive. After doing a picture study of her first one by Millet, I asked her which artist Millet reminded her of: Monet, Vermeer, and da Vinci. Without hesitation, Pamela replied, "Monet!" Although she might not be able to fully explain it, Pamela sees the link between impressionist artists. We are reading about Mesopotamian mosaics. To make sure she understood how we use tile today, we walked through the house and spotted tile around our fireplaces and in the kitchen and bathrooms. She drew a lovely version of musicians playing for the king in the Standard of Ur in her history notebook. While delivering meals on wheels, we listened to two fugues by Bach and THE toccata everyone knows which I hope a young man from our church will play for us someday! 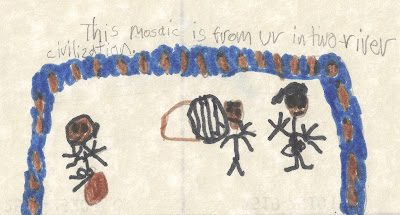 We started several new songs: Mary Had a Baby, One Small Child, and "El Coqui." After one line of the new Spanish folk song, Pamela exclaimed, "Just like Dora the Explorer!" Somehow, I had inadvertently stumbled upon a beloved song from her Nickelodeon days of yore. Since Pamela seemed so familiar with it, I asked her what cantar and coqui meant. Pamela told me singing and frog--even her tía Janet didn't know this alternative way of saying frog. We also started a new fairy tale, Caperucita Roja, and two more homemade Spanish stories about Pamela's grandmother and how to make pie. Then, when she turned off the audio, Pamela said, "Hasta luego!"

Language arts was neat. Pamela did the standard fare of copywork, studied dictation, and recitation instead of typical spelling and grammar textbook homework. She took notes on what we are learning about wild canines from In the Valley of Wolves for written narration. We started a new poet Carl Sandburg. An unplanned connection made our introduction sweet. The first poem was the closing lines of Windsong,

"There is only one horse on the earth
and his name is All horses . . ."

which we started reading right after beginning a new book about--horses! And, in the book on horses, the author wrote of a character who spoke "in a hoarse whisper" like Pamela's mother who read the passage in a hoarse voice! Pamela stopped me and asked, "What is hoarse?" So, I explained, "A hoarse voice is how I am talking right now--with a sore, scratchy throat." The next day, with another book, she instructed me to be the "narrator," so she could read the "quotated." To spotlight the idea of voice in writing, I introduced the word dialog to her: "Oh, you are going to do the dialog. I'm going to do the narrative." Several books later, Pamela observed "only narrator" and I added, "That's right! This chapter has no dialog." With yet another book, I read part of one character as if I were yelling across the house because he was talking through the window to a character in the back yard. And, what did Pamela do? She read, "YES," and continued to read her part in a very loud voice. Isn't interesting how the idea of homophones and voice arise naturally in living books without me having to crack open an official language arts textbook? We teach what Pamela needs when she needs it. 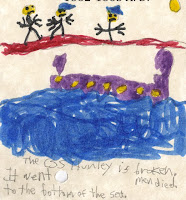 Pamela drew many things. She finished a book on the C.S.S. Hunley and began another set in Charleston at the beginning of the Civil War, so she drew a diagram of the submarine and a map of Charleston Harbor in her drawing notebook and entered another picture of the Hunley in her history notebook. She drew a picture of an Indian chief Lewis and Clark met on their journey. I revamped my approach to our book on American farm life during this era and scaled it back to one major topic a week: this week, Pamela learned about plowing the fields to prepare for sowing corn and added another picture to her notebook. 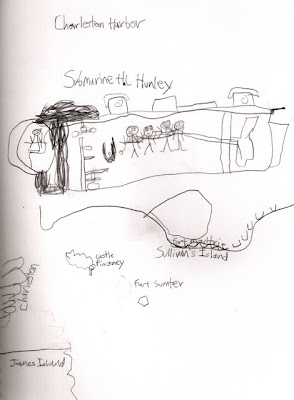 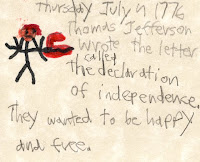 I am using carefully selected snippets of filmed material to help visualize the settings we are covering. Like many educators, I ordered The Story of Us for free last fall, and we spent less than five minutes a day watching a very specific topic. Since we read through the Declaration of Independence last term, we watched two DVD segments on that topic and Pamela made an entry in her history notebook. Since we won't find opportunities to observe wolves, coyotes, and foxes in the wild here in the Carolinas, we have been observing their behavior from afar by watching In the Valley of the Wolves for seven minutes a day. We are going to be brave and try full-blown Shakespeare by watching a filmed scene before reading it. Pamela got into the spirit watching the movie, chanting "Caesar! Caesar!" with me. Since she loves the story of Julius Caesar, I picked that tragedy for her first venture.

We began our revamped history program and narrations were much better. We do history very differently than most families. In the early years, we present it like a sketch to show the big picture through stories. Then we focus on different pieces of the painting, adding layer upon layer. Only she is the artist, painting the gaps in her mind as she sees them. Pamela has enough of American history sketched in her mind that we can continue as we did last term. For world history, we are making the second pass of ancient history, which Pamela loves, by reading an old favorite from Ambleside Online A Child's History of the World along with the chapters on ancient art from art history books. We are reading selected chapters from AO favorite Fifty Famous Stories Retold--already recorded at Librivox--to sketch European history.

I have learned not to fret over missing details I deem important. As we read through short stories about slaves last term, I realized Pamela did not have a grasp of an archetypal portrait of a slave. This book is grounding her in that picture, and, in future studies, she will be better equipped to focus on individual lives with their unique variations. Rather than viewing narrations as a way of extracting information, I look at them as a way of seeing what she knows.

There are plenty of topics we covered that I only have time to gloss over . . . the birth of Isaac and the travels of Hagar and Ishmael . . . the first public miracle of Jesus . . . political parties today and in Queen Victoria's day . . . the building of the transcontinental railroad and the transatlantic cable . . . the addition of four more states . . . the disappearance of a member of the Lewis and Clark expedition . . . one character arrested and another freed from jail . . . three lost in space--no, wait, FOUR are missing . . .

Even after the banquet is over, Pamela's mind still digests her meal. Last week we began a book about gorillas and a picture of the soles of a gorilla fascinated her, especially the black nails. While I sat here typing, Pamela initiated a short conversation on how dogs and bears have claws and humans and gorillas have nails. Then, she asked, "What about monkeys?" and mentioned an episode of The Simpsons in which Homer cuts his nail.

"Education is a life," the need of intellectual and moral as well as of physical sustenance is implied. The mind feeds on ideas, and therefore children should have a generous curriculum. Charlotte Mason

What about math? You'll be sorry you asked. I'm blogging it next.
Posted by walking at 07:49

What an interesting read. You certainly have a very busy life and Pamela is receiving such a rich education. I am so impressed with her willingness to learn and the observations that she is making. Way to go! :-)

Math is coming next. I love it!
I love those questions you asked at the beginning of this blog. AND that Millet. I adore that. I didn't know about that painting. I agree with Pamela about her loves ~~~ she makes me smile!

Di, *I* am receiving a rich education alongside her! :-)

Bonnie, I'm glad to introduce you to a new Millet. I love how you often redecorate your blog with gorgeous paintings!