An Hour at the Museum

My understanding of what a book of centuries means has gone on many rabbit trails and, with the help of my friend Laurie Bestvater, I finally get it. I think! If you have not read her article on them, reading it will improve your grasp of what they are. Last summer, I ordered a beautiful book of centuries from her and, as noted last fall, Pamela has been making regular entries in it based upon pictures of artifacts we find at museum websites. She will continue to add pictures and entries as we read wide and varied books and look up pictures online.

In November 2011, I blogged our visit to the Nelson-Atkins art museum but decided not to mention how much I felt like kicking myself! I had no idea they had such a large collection of ancient artifacts. We had been reading about ancient Egypt—they had a mummy, coffins, slabs with drawings, paintings, and hieroglyphics, large and small statues, etc. We had been studying columns, and the building itself had every kind of column we had studied not to mention a ginormous Assyrian relief with the rosettes and tree of life motifs. It even had Greek pottery with the paintings of gods and heroes. Where was the book of centuries? At Steve's apartment! Ack!!!!! 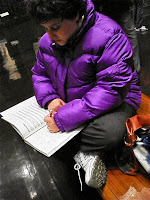 During our Christmas visit to Kansas, I made a point to spend an hour at the museum and let Pamela pick a few things to record in her book of centuries. We stayed in the ancient world the entire things, focusing on what she had been reading in her history and art books. She quietly drew while I snapped a few pictures. I even teared up when I realized this was the first time Pamela was using her book of centuries in the way that Charlotte Mason's students has used them over a hundred years ago! 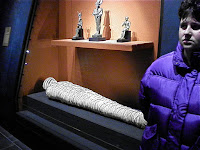 The very first thing Pamela chose to draw was the mummy, of course. We turned to the pages on the 5th century B.C. and she recorded a nameless mummy labeled Ka-i-nefer. While Pamela made her entry, I read the information about how a team of specialists examined the mummy with sophisticated equipment to gather details on how he might have looked. 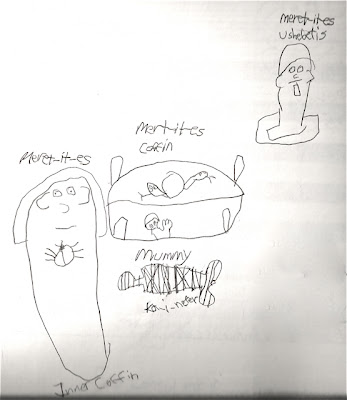 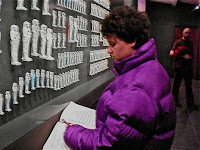 In the same room as the mummy were coffins of someone who probably lived later than the mummy: a noblewoman named Meret-it-es, whose name means beloved by her father. The display included her inner coffin, outer coffin, guilded mask, body plates, figurines of slaves to serve her in the afterlife, etc. On the same page as the mummy, Pamela drew pictures of some of these items. 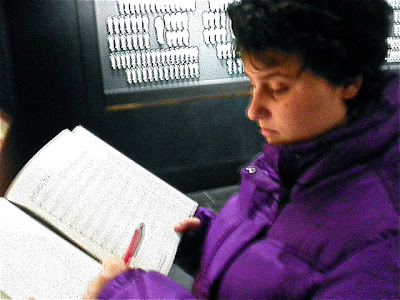 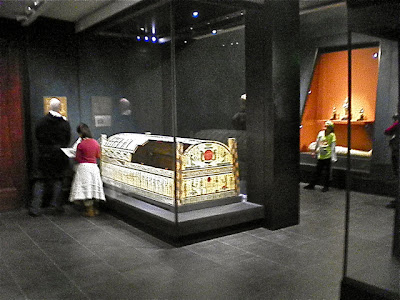 In that same room was a slab of a couple named Se-ankhy and Ankhu. Pamela drew a picture on the pages for the 20th century B.C. 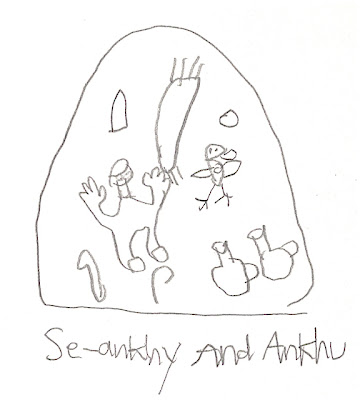 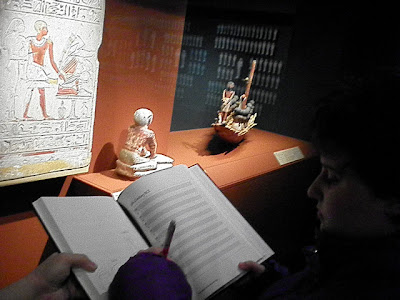 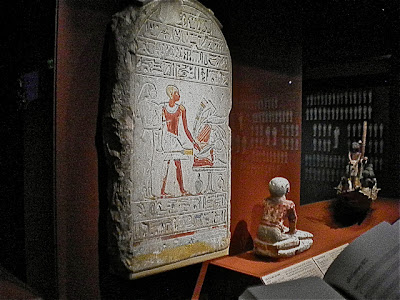 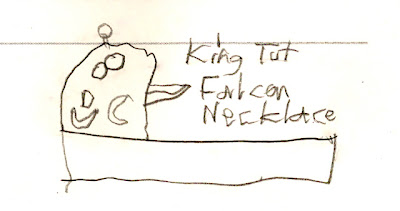 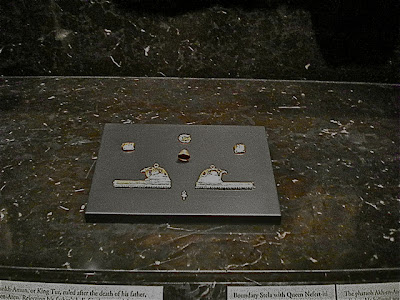 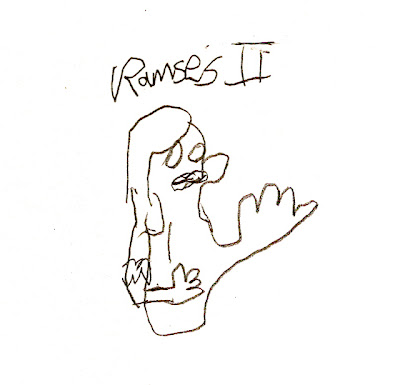 A relief of someone a bit more obscure, Metjetji 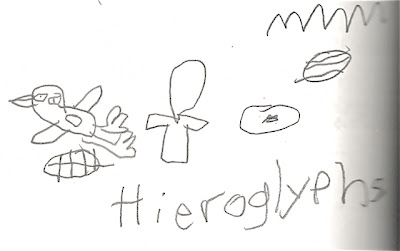 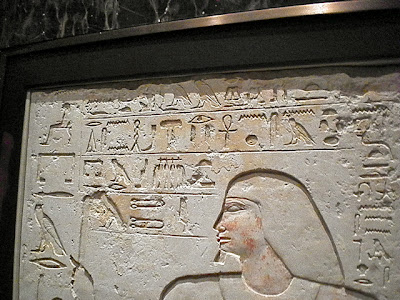 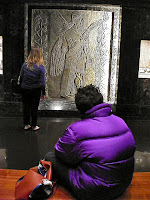 My absolute favorite moment was sitting in front of this magnificent sculpture of the genie fertilizing a date tree. Pamela spent a quarter of an hour sitting on this bench, sketching the creature in her notebook. I sat next to her and simply studied the sculpture. We noticed it on our last visit but didn't stop to "see" it. We posed and snapped a picture before breezing over something else in the ancient world. We stopped and studied: Pamela drew into her book of centuries while I sat and soaked in every detail I could absorb in fifteen minutes. The experience reminded me of a post Amber Benton blogged about sitting and really seeing at a museum. 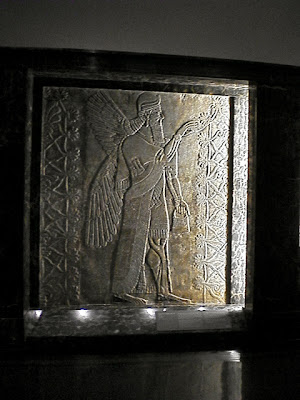 The first detail I noticed was the tree, having learned about the "tree of life" motifs common to Assyrian sculpture. It reminded me how Pamela draws trees in her nature notebook: highly stylized and sparse in its foliage. Then, my eyes drifted over to the wings. Until that moment, I had not realized the figure was not a human, but something mythical. The feathers are so detailed and striking, and that is when I began to appreciate the skill and patience it took to create this sculpture. 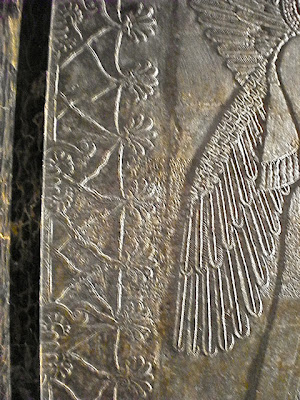 As I moved closer to study the feathers, I noticed the lines of cuneiform! Although Pamela and I have seen similar reliefs in her sculpture book and online at the British museum, I don't remember seeing ancient writing on it. I didn't see it in this sculpture during our last visit either. 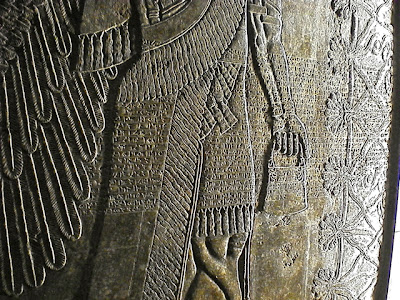 The lines of cuneiform led me to the genie's legs: highly muscular, buff, apparently to signify the creature's power and strength. My eye moved up from the well-defined calves to an equally buff arm. I wondered why this manly creature carried a manbag, or murse, but corrected myself on the error of applying modern thinking to something crafted almost three thousand years ago. 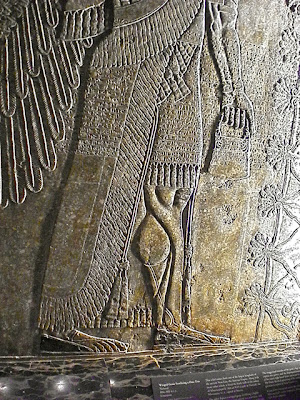 Looking still further up reveals an answer to the murse question: the genie is fertilizing a date tree with a male cone. Most likely, it dips the cone into a bucket of pollen to accomplish the mission. I noticed the bracelets with the rosette motif common to Assyrian sculpture. The genie also wears earrings and a horned helmet. Its hair is styled in the fashion common to Assyrian royalty: long hair and long beards sporting corkscrew curls, a term I first read from our beloved copy of A Child's History of the World. 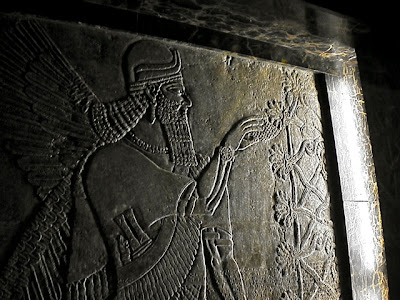 Here are more historical tidbits: the winged genie fertilizing a date tree dated ninth century B.C. comes from the palace of King Ashurnasirpal II in Nimrud, which was the capital of Assyria at the time, about 200 miles north of Baghdad, Iraq. The palace, which could hold five football fields, had reliefs like this lining its brick walls. This one was near the king's throne room. Sometimes the genies on these reliefs were hybrids of humans and other animals, specifically the eagle.

Ashurnasirpal II was ruthless. I cannot go into details here because I like to keep my blog G-rated. However, if you are curious, you can read the kind of grisly boasts this conqueror made about his feats in battle. He bragged about his tribute, everything from metals to exotic trees and plants to monkeys. 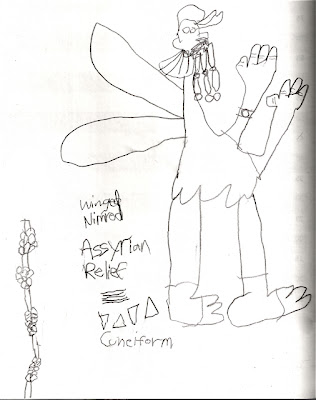 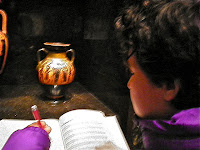 Pamela recently studied the five styles of Greek jars last term. Of several on display, Pamela wanted to record the terracotta amphora (two-handled jar) with Dionysius, the god of wine, painted in black. It stood next to another amphora with Achilles. These jars are great examples of positive versus negative space. The subject (Greek heroes and gods) are positive space in the natural color of the clay. To create the image, the artist only painted the negative space in black. I'm wondering these jar paintings might be way to introduce the concept of space to Pamela. 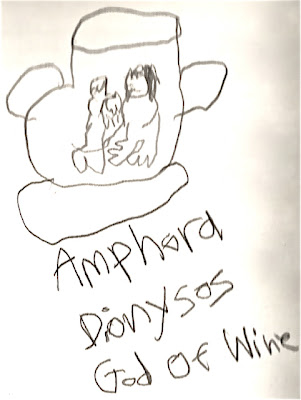 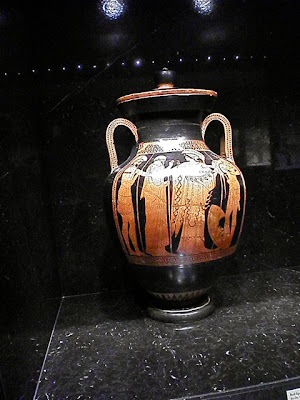 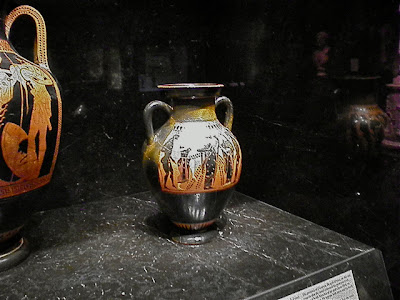 [Art] is of the spirit, and in ways of the spirit must we make our attempt. We recognise that the power of appreciating art and of producing to some extent an interpretation of what one sees is as universal as intelligence, imagination, nay, speech, the power of producing words. But there must be knowledge and, in the first place, not the technical knowledge of how to produce, but some reverent knowledge of what has been produced....The little pictures are studied one at a time; that is, children learn, not merely to see a picture but to look at it, taking in every detail (Page 214). ~ Charlotte Mason

Email ThisBlogThis!Share to TwitterShare to FacebookShare to Pinterest
Labels: Book of Centuries

This is an excellent and wonderful post. You two have done an amazing job! I have pinned this at Pinterest. (BTW...did you ever get to Charleston?)

Excellent post and I sent it to my students! Not all of them went to the museum on Friday but we are working on their BOC in class on Thursday!
Tell Pamela she is quite an artist!

Thanks, Bonnie. I hope your students are inspired! I was.

Phyllis, I have been on the go so much and am almost caught up. I think I'll have time on Thursday!

What a wonderful way to use a Book of Centuries!

It is actually how the book of centuries got started!