Where We Do School in Spite of My Sore Throat 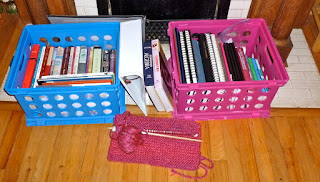 Pamela has been looking forward to today for a long time. Over the holidays, she choose to do schoolwork so that she could do exam week so that she could have the first day of school with a brand new crop of books. Unfortunately, a nasty sore throat started plaguing me yesterday and, between that and the nausea and headaches, I was afraid I might let her down.

Pamela's determination won my over, and we managed to do a full day with copious napping on my part. I loved seeing her bright smile when we began a new book. The wave of joy that swept across her face when she heard the recording of her daddy reading El cuento de Ferdinando kept me going.

This year, we upped the ante of copywork. Pamela now copies seven words in Spanish and two sentences from any book that we read during the day. I cracked up at the juxtaposition of her last entry of the last crop of books to the new entry. "Why are you afraid? Do you still have no faith?" is what Jesus said to the disciples on the day he calmed the storm. "And suppose you do know the answer to that question, what difference does it make? Who cares?" was taken from a science book asking if two different sized stones will hit the ground at the same time if dropped at the same time.

And, speaking of storms, we witnessed the coolest thing as we were leaving watercolor class last Thursday. The sky blackened and, near the end of class massive thunder rocked our ears. As we were getting up to leave, lightning struck and we saw blue and green flashes outside. The building lost power, and the static electricity in the air put Pamela's iPod to sleep. It did not wake up until the next morning. I figured out later that we witnessed St. Elmo's Fire, which is the making of plasma. Since Pamela needs to work on sequencing non-biographical events, I guided her through a written narration of what happened. 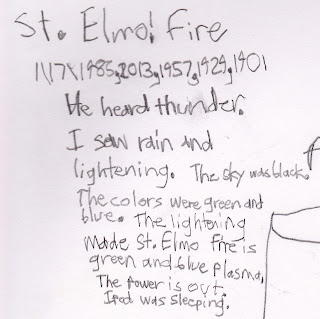 Seeing plasma live was one of those lovely moments God orchestrated for us. The Friday before, our Charlotte Mason community had tried to make plasma in the microwave, but we failed. Fortunately, the experiment had worked at my friend's house and she showed us a video of it. Pamela added this fourth state of matter to her science journal. 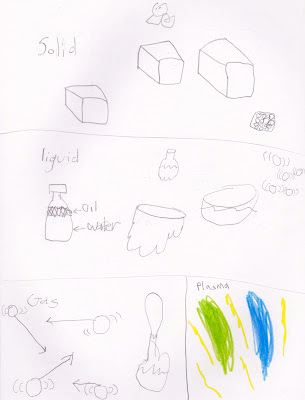 Devoting some time to the growing of plants is a scary thing since I have a black thumb. First Pamela matched the seeds to the packets. She knew five of them, which left her to guess correctly the sixth (buckwheat). Since she also needs to work on describing what she sees, I guided her through a written narration about the seeds. 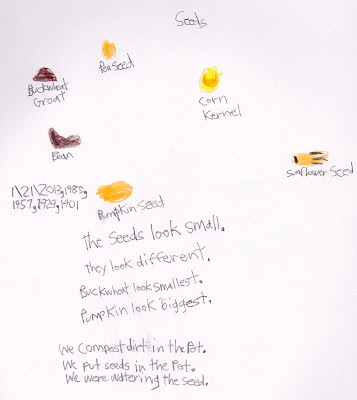 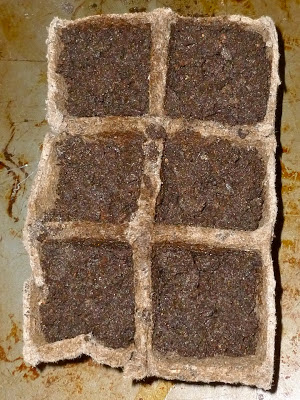 With my sore throat, planting the seeds offered the chance to gesture to her. I guided her to narrate in writing the steps we took to plant seeds.


Pamela has such an eye for detail and pattern that mathematics is her best subject. This year we are going to test drive Jacob's Algebra and Jacob's Geometry, side by side, at very leisurely pace. We will also be throwing in Kahn Academy to hone basic arithmetic. Inspired by my friend Laurie Bestvater, I have been pondering how to keep a mathematics notebook. In addition to a three-ringed binder for loose-leafed papers, Pamela will put her problems in a composition book and her thoughts and ideas in a journal.

After reading the letter to the student, Pamela's entry cracked me up! She recalls watching her brother work through Jacob's Algebra as he prepared for the mathematics placement test at CSU. After we finished mathematics, Pamela announced that she was not getting a job and, if she had to get a job, she was going to be a farmer of her stuffed animals.

Pamela adored the first page of algebra, which focused on number tricks. She giggled as we tried the trick on 100 and 0, which turned out the result of 5 every time! For geometry, she drew two equilateral triangles using two different construction techniques: (1) using the 30-60 triangle from RightStart and (2) using the unusual compass from RightStart. I did not have a traditional protractor on hand, which I need to purchase. By the time we finished geometry, I was too worn out to go beyond making the triangles. 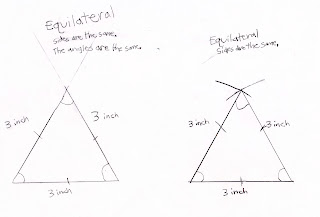 Pamela is continuing to work on her baby blanket for her "babies". Once she finishes this ball of yarn, I will teach her how to purl and she can practice stockinette stitches. 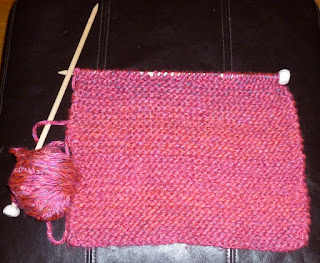 That is a LOT of work! I don't know how you got it all in with those naps, but your student is very eager! I know you are extremely proud of her.

The key is SHORT lessons. One reading from one book is only about five to ten minutes. She doesn't do well with reading thirty minutes from the same book. She forgets too much.

We survived a second day with only five things left undone. My head couldn't take it anymore. LOL The highlight of the day was when Pamela said "Wow!" during a demonstration of static electricity. Who knew that chads from hole-punched paper could serve scholarly excellence?