The Frog Eggs in My Cracker Barrel To-Go Cup!

Another chapter in The Raptor in My Prius series and sequel to What Happens When You Kiss a Frog.

On atmosphere, Charlotte Mason wrote, "It stultifies a child to bring down his world to the 'child's' level." In science education of today, I believe examples of stultification are posters, plastic toys, puppets, magnets, and stacking blocks showing the life cycle of a frog. They reduce the interesting life of transforming tadpoles into a factoid to be learned. Anyone who has spent weeks following a tadpole from egg to frog does not need pricey memory tricks. 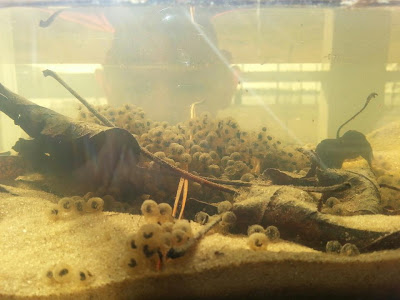 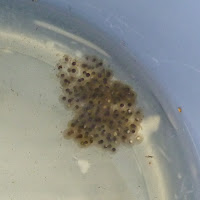 My friend Shea and I wanted to find some frog eggs so our kids could see metamorphosis firsthand. Her kids donned their boots and grabbed their net, and we hauled our buckets and searched promising puddles until we found some frog eggs. We had worked up quite an appetite, so we headed to Cracker Barrel for a hearty meal. As luck would have it (or I prefer a whisper from God), while we were eating lunch, in walked a fellow lover of nature study—the headmaster of a school nearby! We ran up to her almost giddy with excitement—or, at least, I did.

"Guess what we have in the back of our cars?"

"Of course! Do you have a container in your car?"

Which of course led to a rash of rather confusing stories being spread in the homes of first graders attending her school that Mrs. B got frog eggs from the Cracker Barrel. And, now, we are all hosting and observing Southern Leopard frogs in our respective classrooms. We settled upon that classification for a couple of reasons. We know they are frogs for toads spawn eggs in a long ribbon. Southern leopard frogs are common in our area since they thrive in our wet habitat. We found ours on what looked like a temporary wetland, brought on by winter rain. Other frogs in our area do not mate this early in the year. We also recognized their call in this you-tube video. The truth will out, however, in about three months, which is how long they take to transform! Raising tadpoles is not a short-term flirtation. 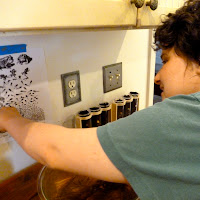 As I've not seen frog metamorphosis with my own eyes, this study is a perfect example of what Mason described as a "bracing atmosphere of truth and sincerity"— "the common pursuit of knowledge by teacher and class comes to our aid and creates a current of fresh air perceptible even to the chance visitor, who sees the glow of intellectual life and moral health on the faces of teachers and children alike." You can clearly see the delight in Pamela's profile as she tries to spot a toad tadpole shape matching ours.

What a poster? Not exactly! I printed out an illustration of the abundance of shapes a toad tadpole takes on in its journey to adulthood from my favorite book for study, Comstock's Handbook of Nature Study. 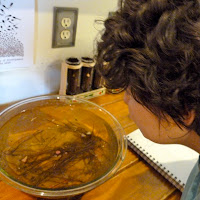 That illustration came in handy. At first, we thought some eggs had already hatched. But, these "tadpoles" visible in the bottom left corner of the picture below did not develop as depicted. They did not behave in the manner described by Comstock. Later, when we spotted some dead, striped bugs floating on the water, we surmised that the tadpoles had really been insects. When teachers let living things instruct students, the teacher does not need all the answers in advance. All we learners need are strong powers of attention and curiosity. 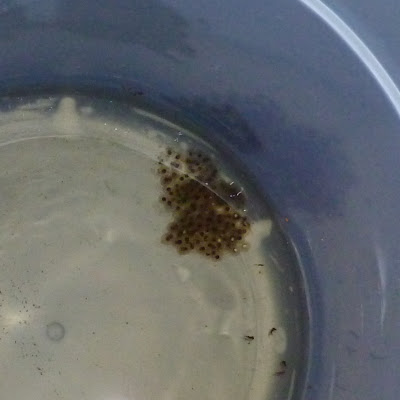 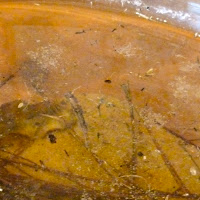 When the tadpoles first emerged, Pamela thought they looked like beans. They must have been only a few days old for they lacked the large prominent head. The only way we could tell the ones floating on the surface were alive was by disturbing the water. Then, live ones would swim away (in case you don't know tadpoles have a high rate of mortality). My first question was why my friends saw their tadpoles hatch first. We found out that southern leopard frog eggs hatch more quickly when they sense predators nearby. We kept our tadpoles rather quiet, while the tadpoles in my friends' home and school had far more frequent visitors! 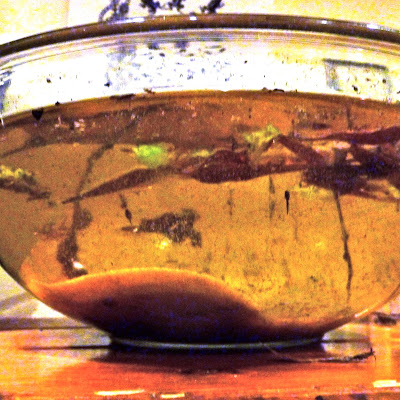 Then, the tadpoles began to look like what Pamela called balloons: their heads grew large and they seemed to hang suspended vertically, head up. Comstock states that tadpoles secrete a sticky substance and attach themselves to weeds, resting head up. When Shea and her children discovered their tadpoles hanging around en masse, they felt like it was Christmas morning! 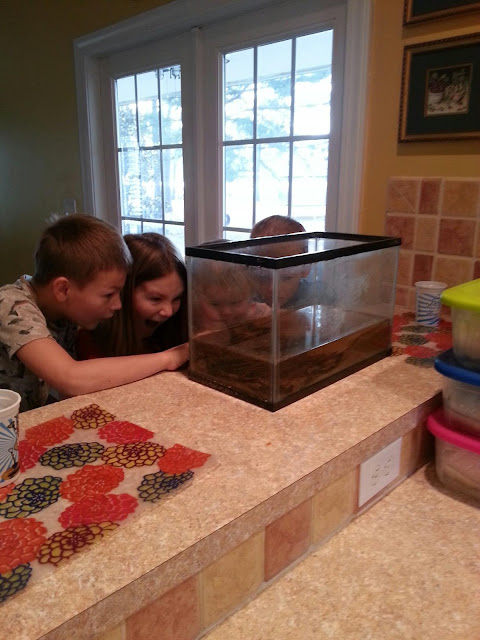 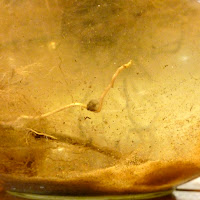 We are learning all sorts of things not found on a life cycle poster. Sometimes, in early development, tadpoles look like bubbles. Their bodies are almost transparent. They also play dead! When you move the bowl, they stiffen up and float to the ground. Violently disturbing the water will cause them to swim away, tails a-twirling! Shea and I both nearly threw out live tadpoles when we changed the water to freshen it up a bit. 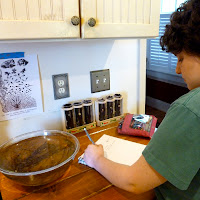 Pamela records her observations in her science journal (not some contrived worksheet). Again, we are trying to avoid artificial relations set up by me. Mason wrote, "It is not an environment that these want, a set of artificial relations carefully constructed, but an atmosphere which nobody has been at pains to constitute. It is there, about the child, his natural element, precisely as the atmosphere of the earth is about us." 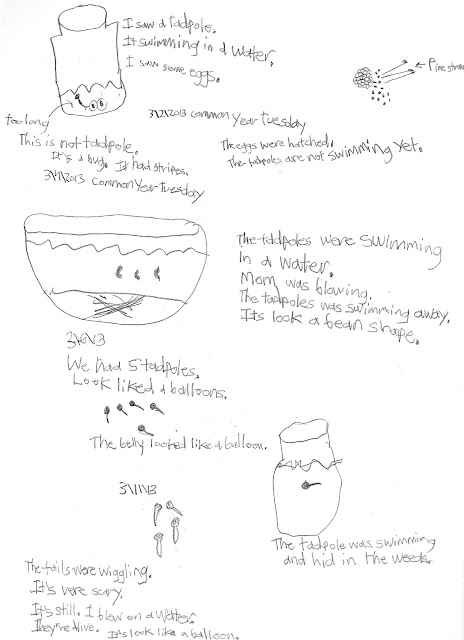 I will close with a page from the biography we are reading for South Carolina history this term, A Hunt for Life's Extra by Idella Bodie. Having heard the enticing croak of the southern leopard frog, Pamela and I know why the boys traipsed around in mud puddles wearing their finery. Do you?

When the inevitable day came, Hugh and Archie were dressed in their finery and told to keep themselves spotless while last-minute details were looked after.

Far more restless than grave, quiet Hugh, Archie wandered out on the spacious front porch to wait for the family. For a time he stood there marveling at the beauty of an April morning washed fresh in last night’s torrential rainfall. The trees and shrubs sparkled with cleanliness under the bright sunlight. Here and there rain lay puddled.

Thoughtful Hugh, whom Archie later said was his "balance wheel," came to stand beside him.

About that time Prince, wet, bedraggled, and happy, rounded the corner of the sprawling porch.

Seeing his playmates, he came to an abrupt halt as if he had slammed on brakes. "Listen to dat!" he grinned.

From somewhere behind the stable-yard frogs croaked.

With that Archie and Prince struck out toward the wet, boggy field where last night's rain had formed a pond. As Prince promised, heads of croaking frogs thickly dotted the tawny water collected in the lower part of the field.

Archie leaned down to grab a frog at the edge.

"But you said we were just coming to look." Until Hugh spoke, Archie had not realized his brother had followed.

Prince had grabbed a burlap sack from the stable, and now he stood wide-eyed, holding it open for the catch.

In a moment Hugh, too, could not resist. It seemed the best frogs were in deeper water, luring the boys out farther and farther.

Every time they grabbed a big one, they had to make another sloshing trip back to Prince, who was grinning over the slimy, kicking collection.

Archie was standing in the middle of the pond when he looked up to see a curious expression spreading over Hugh's face. A quick glance toward Prince showed only a deserted burlap sack with frogs jumping gaily from it.

On the shore of the pond stood the Colonel. A little while later as their clothes dried and the brothers sniffed by a bedroom window, they heard Prince getting his in the kitchen.


Here are a few more pictures for all y'all to enjoy! 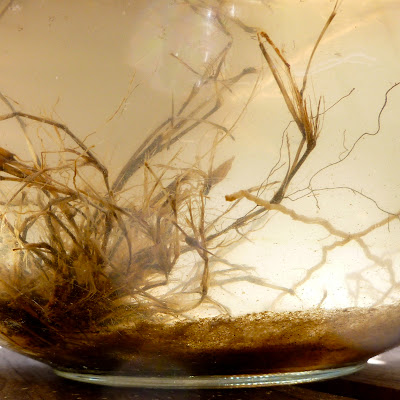 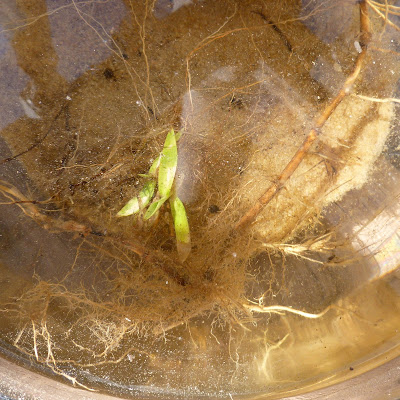 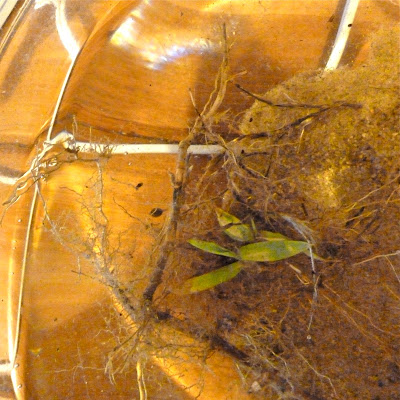 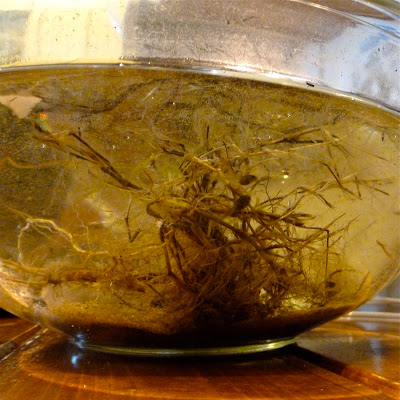 What an inspiring post - letting living things instruct us & not needing to know all the answers beforehand. It's very freeing to teach this way, especially when your own education was pretty forgettable. Thanks for all the detail. Just got to go out & find some to grow now.

Did you have to feed them anything or use certain water? Our poor tadpole died years ago and I'm afraid to try again!

My friend talked to a local park ranger, and we both researched online. One thing is you have to avoid chlorinated water. We have been using lake water. Shea lives on the lake, and we are trying to stick with what is local. The ranger suggested weeds from the lake as a food source. They eat algae, too so I occasionally add a fish flake and a bit of an algae pill.

Frogs lay lots of eggs because tadpoles are not the most hardy things and they have lots of predators. Obviously, by keeping them, you avoid the predator issue but you should get a small cluster of eggs rather than just a tadpole.

If you use tap water, you need to leave it out in the sunlight for a few days. That removes the chlorine.

What a wonderful long-term study! Our tadpoles grew into the most wonderful, perfect teeny-weeny frogs, and then all escaped out of the fish tank one night! We found about half of them the next morning hopping through the house - all in the direction of the fish pond! How did they know where it was? We released them back to do what frogs do! Fun!

You've inspired me to collect frog eggs this spring and have my daughters watch and journal about the growth/development process.

I found some today!! Reading up on how to care for the eggs - we have quite a few, and it was fun hunting (aside from the wet pants, socks and shoes, lol)