Pondering Art on a Good Friday 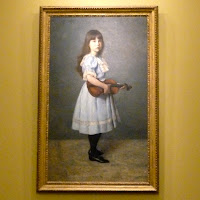 What makes art worth stealing? As my friend Megan shared this week, Nazis robbed paintings from Jews whom they massacred in the Holocaust. Many items are in museums and private homes. Survivors have struggled to recover treasures of their perished beloved. By the way, this Portrait Study of a Child by Lilla Cabot Perry reminds me of Megan's daughter Hannah, a brilliant violinist with a fabulous voice and author of Brightleaf.

Why is art so important?

Edith Schaeffer—mother of Susan Schaeffer Macaulay who wrote For the Children's Sake, dear to ones applying Charlotte Mason's ideas—left a legacy of art to her children. She died yesterday. Her son Frankie wrote in his tribute to her,


Mom’s great-grandchildren were growing up loving what she’d loved: words, art, music, gardening, cooking and playacting. Mom was unable to speak any longer but she was nevertheless communicating with her children, grandchildren and great-grandchildren every time they were read to, listened to music or when we painted together.

Frankie lists the world's finest artists his mother introduced to him as a child. Now her great-grandchildren love them as well.

I really can't explain why art is so important.

We visited the Nelson-Atkins Museum, which may be an odd way to spend Good Friday. Then, again, maybe not. 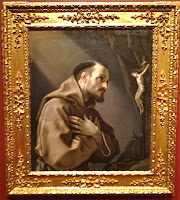 Our aim was to meet a Winslow Homer in person. First, we bathed in the art of Europe. Steve spotted St. Francis of Assisi Adoring the Crucifix by Guido Reni. He snapped and posted this picture on Facebook. A new pope with a new pope name has put St. Francis in the headlines. Steve grew up Catholic in Latin America as did Pope Francis.

Speaking of which, Edith Schaeffer was both mother and wife to men named Francis. Frank, the son, wrote of his mother, "Mom was a wonderful paradox: an evangelical conservative fundamentalist who treated people as if she was an all-forgiving progressive liberal of the most tolerant variety." Francis I, also a paradox in thinking conservatively and acting liberally, showed his love for the marginalized by washing, drying, and kissing the feet of twelve juvenile delinquents at a nearby prison, including two girls and two Muslims. 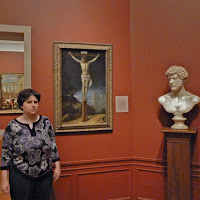 Opposite to St. Francis was Christ on the Cross by Philippe de Champaigne. Christ. The ultimate paradox. And between them, Nicolas Poussin's The Triumph of Bacchus—the very opposite of that paradox, foreshadowing of the excess in our culture. 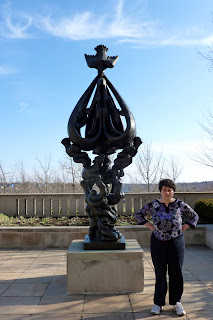 Studying Peace on Earth by Jacques Lipchitz on Good Friday brought Easter home. Love come down from heaven on the wings of the Holy Spirit. The dove's body, shaped into a cross. Love, the foundation to the gruesome reality of the ultimate sacrifice. What a lovely touch to see clouds hovering overhead, a symbol of the tears shed by our Lord on that dark Friday and of the tears of joy to come three days later. "He will wipe away every tear from their eyes, and death shall be no more, neither shall there be mourning, nor crying, nor pain anymore, for the former things have passed away."

On our way to finding Winslow Homer, we came across a spectacular view of Jerusalem from the Mount of Olives by Frederic Edwin Church. Even this high resolution image fails to do justice to seeing the painting in person. 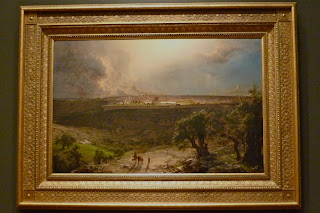 We met our Winslow Homer: Gloucester Harbor shared a room with Jerusalem. I admired the gorgeous pink and cerulean blue and wondered if the lads would fish some day like those fishers of men. 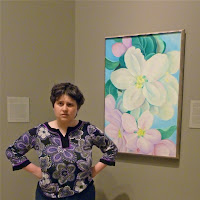 In our first meeting with American art, we saw a Georgie O'Keeffe (Apple Blossoms) loved two paintings by Frederic Remington (Teaching a Mustang Pony to Pack Dead Game and Hostiles Watching the Column) and a End of the Trail sculpture by James Earle Fraser.

This silvery illustration for Drums brought to mind the picture of the fluttermill from The Yearling for N. C. Wyeth illustrated both novels.

We explored Kansas City Sculpture Park, the grounds of the museum, for the first time. The weather warmed us as we watched robins seeking worms and daffodils sporting cheerful bonnets. How could one not smile with ginormous shuttlecocks dancing on the lawn? The last sculpture we will share offers one clue to the value of art: Auguste Rodin's The Thinker, which Pamela imitates in her pose. 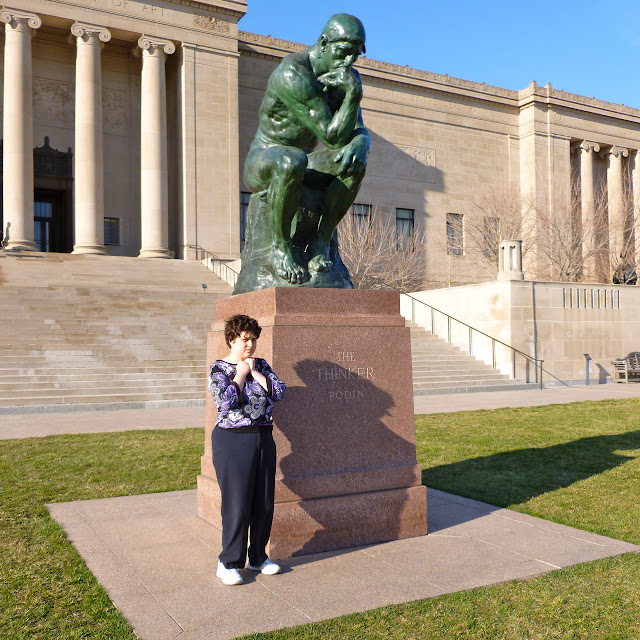