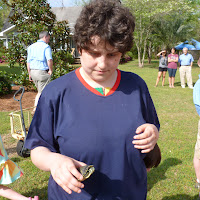 What is an idea? we ask, and find ourselves plunged beyond our depth. A live thing of the mind, seems to be the conclusion of our greatest thinkers from Plato to Bacon, from Bacon to Coleridge. We all know how an idea 'strikes,' 'seizes,' 'catches hold of,' 'impresses' us and at last, if it be big enough, 'possesses' us; in a word, behaves like an entity.

If we enquire into any person's habits of life, mental preoccupation, devotion to a cause or pursuit, he will usually tell us that such and such an idea struck him. This potency of an idea is matter of common recognition. No phrase is more common and more promising than, 'I have an idea'; we rise to such an opening as trout to a well-chosen fly. ~ Charlotte Mason

An idea is a slippery thing. It is not something to capture in a snapshot because an idea is alive. It is hard to recognize until seen in action. Once an idea takes hold, it grows into something beyond the initial inkling. When I first saw a friend post pictures of slider turtle eggs on Facebook in the summer of 2011, I thought it would be neat to study them. She ended up bringing her babies to Pamela's watercolor class. Seeing the turtles swimming made me long to study them more in-depth and attend their release.

Last summer, when my friend posted pictures of the nest, I begged her to let us come over and study them. She graciously obliged us, so Pamela and I saw their nest, peeked at their eggs, and visited them for a well baby check up. Bubbling over with excitement about the turtles, I shared the news with the children in our church afterschool program about nine yellow-bellied slider turtles a friend of mine was raising over the winter. The idea of seeing these little reptiles seized hold of those children. Unfortunately, my friend, a very busy volunteer who gives her time to others in so many ways, could not line up time for the turtles to visit us at church. Nearly every week, the kids would ask, "Mrs. Tammy, when is your friend going to bring the turtles?" Once the idea caught hold of them, they did not let up on begging to see them. 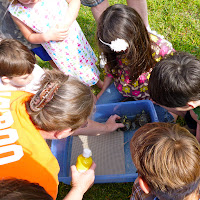 My homeschooling friends were also intrigued at the thought of studying the turtles. I suggested the idea of having a release celebration to the turtle lady, and she thought it would be marvelous to have a send-off for her babies. We timed the party for after our homeschooling gathering, and I invited the children from church, too. It turned out to be a wonderful day. After the initial surge of excitement died down, all my little friends had a chance to study the turtles up close. 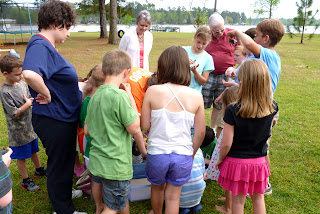 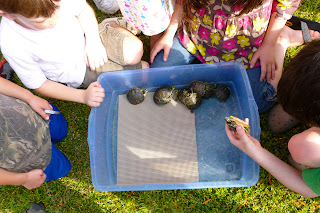 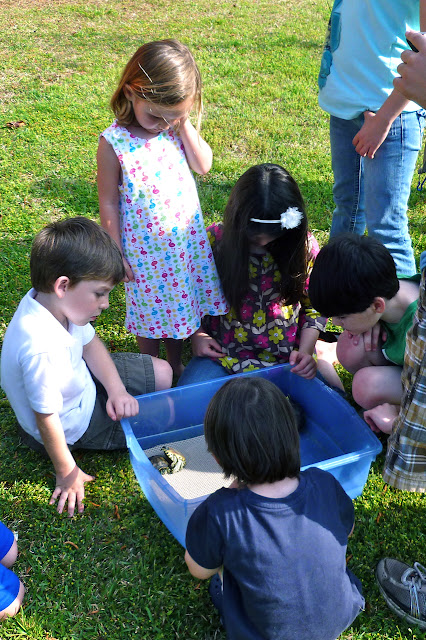 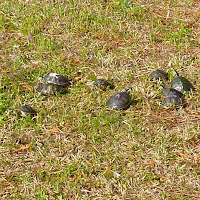 Then, my friend dabbed non-toxic paint on the shells. It ended up being a bit messy because the turtles began climbing all over each other, smearing the painted. She placed the turtles in the center of a ring we formed around the turtles. We had a race to see which critter would reach a person first. 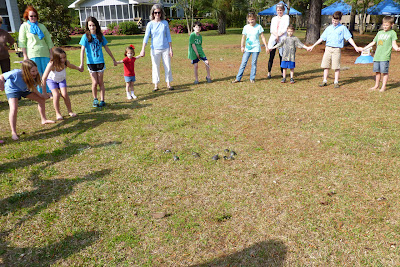 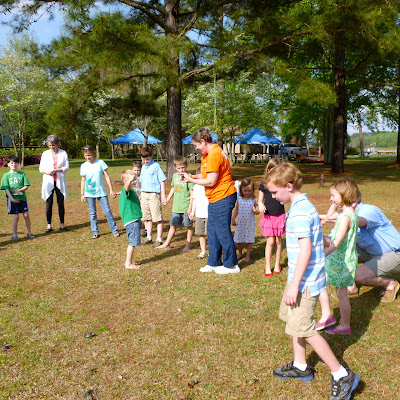 After my friend washed the paint off the turtles, we lined them up at the beach and watched them swim away, one by one. Some boldly headed off into the water. Others needed a little more guidance and encouragement from us, as you can see in the video below.

The traveler’s eye picked up a turtle trail,
Between the dotted feet a streak of tail,
And followed it to where he made out vague
But certain signs of buried turtle’s egg;
And probing with one finger not too rough,
He found suspicious sand, and sure enough,
The pocket of a little turtle mine.
If there was one egg in it there were nine,
Torpedo-like, with shell of gritty leather,
All packed in sand to wait the trump together.
~ Robert Frost

turtles are my favorite animal. 1) change just one letter and you have my last name. 2) sometimes i act just like one... i can often be found hiding in my shell.

An old favorite book of ours is called, The Smallest Turtle and it is written by Lynley Dodd (book for children). As I read your post, I found myself chanting "to the sea, to the sea"... thanks to the above book! Lovely post and a wonderful learning experience for all involved. :)

Wonderful--I so enjoyed coming along with you on this little field trip! Thanks for sharing it!