Blast from the Past: Capital Crazy

At age seven and a half, Pamela had mastered her pre-writing skills and seemed ready to write. An occupational therapist and dear friend, Nancy Kashman, gave me a copy of the first grade level of Handwriting without Tears. Had the pre-K and Kindergarten materials been available, I would have tried those first! The teacher’s guide provided excellent tips, especially for teaching lefties! Many parents of children with autism find this program, developed by occupational therapist Jan Z. Olsen, effective in teaching children to write.

Homeschoolers have many opinions of what penmanship program is the most effective. Some prefer the traditional ball and stick concept because what the child writes matches the kind of text they seen in print. I believe Handwriting without Tears is one of the best programs in this category (backed by research). Her teacher’s guide includes tips for avoiding letter reversals, which is one of the cons mentioned by those who prefer other methods. Pamela struggled to learn curves and found Jan Olsen’s minimalist style with few curlicues and flourishes easier to master. Other homeschoolers prefer italics like Getty-Dubay or D’Nealian because of an easy transition to cursive, reduced number of pencil lifters, and smaller potential for letter reversal. Programs for language delayed children like the association method start with reading print, but writing with cursive to focus the child upon whole words. One creative friend let her son pick letters he likes the most by comparing them at sites like Educational Fonts: he prefers a blend between Getty-Dubay and D’Nealian.

We spent the first half of Pamela’s second year as a homeschooler practicing the formation of capital letters following Handwriting without Tears’ wet-dry-try method on a slate with a piece of chalk and sponges. My kids, the super-smash siblings, broke the slate before Pamela had mastered her capitals, so I improvised by taping a border with electrical tape onto a dry erase board. One advantage to this innovation was that I could gradually make the box for writing capitals smaller and smaller as Pamela’s control improved. I could also spell words on the dry erase board by taping several boxes. Four months may seem a long time to practice capitals off paper, but Pamela’s first efforts on paper in January of that school year show how difficult she found writing legibly. 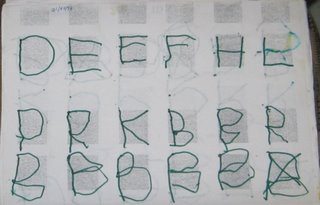 Thanks to our sabbatical from writing and Blues Clues, Pamela had made friends with markers. When we reintroduced writing letters on paper, three strategies helped her learn to write legibly. First, because she had a tendency to press too hard with pencils, we started her off with markers in January and transitioned to pens in April. Had gel pens been available, I would have tried those before ballpoint pens. Second, she had difficulty writing with small print, and I later learned macrographia was common for children with autism due to differences in their cerebellums. The blocks in Handwriting without Tears’ gray block paper were too small, so I made copies with 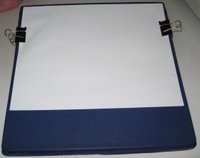 enlarged images until I found a block size successful for Pamela. As her control improved, she worked her way down to the regular-sized blocks for letters she had mastered, but still needed enlarged blocks for new letters. Third, Pamela wrote with greater ease in the vertical plane, so we started her off with writing on paper taped to the refrigerator. Then we transitioned to a slant board, which is very expensive. Nancy Kashman told me how to make them out of thick three-ringed notebooks. As her writing improved, I gave her thinner and thinner notebooks until she could write on a horizontal plane.

In the second half of that year, we had daily writing lessons of less than fifteen minutes. Like Charlotte Mason, Jan Olsen recommends short lessons. She puts letters in order of strokes, and Pamela practiced those with starting lines that begin in the upper left corner of a block and flow down to the lower left corner. Pamela did well with straight lines and letters with one large curve, so I had her write DEFHLK only once. We practiced her challenging letters first on the dry erase board and followed up with several repetitions of PRB on paper, especially B. She learned M and N next.

By February, she had learned all the starting letters with a vertical line going down from the upper left corner. Pamela showed signs of being able to print small letters. In February, we worked in letters with starting points in the center of the top edge of the gray block. We choose A first so that Pamela could spell her first name! Then we covered other center starters IJ and those that start in the upper left corner, but go in other

In March, Pamela was ready for curved letters like COQ, but needed the enlarged gray block paper at first. Then she learned GSU.

By April, Pamela could write the entire alphabet in capital letters and her first name on the gray block paper. We introduced two new things: writing with a pen and numbers (on the enlarged gray block paper).

In May and June, I assigned extra copywork on primary tablet paper with a seasonal theme.

Pamela’s final paper at the end of the school year was far from perfect. Although she understood catchy little phrases from Handwriting without Tears like “bump the bottom,” Pamela never really mastered perfect control. Her lines strayed outside of the gray blocks and her straight lines sometimes wavered. 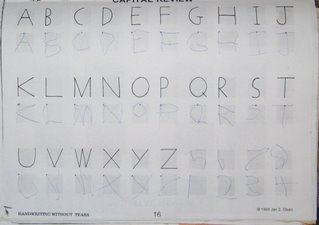 Even today, after years of practice, she does not perfectly execute her letters. I keep in mind three soothing thoughts: Pamela enjoys writing and does it in her free time! Her writing is large, loopy, but legible. Some children in the autism spectrum have dysgraphia and struggle to write anything. We are blessed Pamela can write as well as she does.

Email ThisBlogThis!Share to TwitterShare to FacebookShare to Pinterest
Labels: penmanship

Like Pamela, Alan has had a long road learning to write in manuscript and now also cursive. Just today he asked me to stop in at Sophie's Learning Center to get him a new printing book. He wants to go through another one. He has finished Handwriting Without Tears. Now he is able to print reasonably well. He wants to perfect his printing. I am able to do this with him at fourteen, almost fifteen because he feels no stigma to learning to handwrite more slowly than age seven or eight. I love that he is motivated to improve his printing, just like Pamela.

wow, what another hope-filled post. I must email you. Sincerely, Dianne

We, too, use HWT! I actually started using it before we knew anything about Austin or Reece's autism. Riley (my typically developing child) has used it as well. She'll be starting the cursive after Christmas! Austin did cursive, but he much prefers to print, and that is fine by me! Riley actually taught Reece how to print capital letters last year, with the assistance of the wood pieces and capital letter cards.

Thanks for linking me to your blog, and for your supportive comments on my own blog. I still struggle daily with wondering if I am doing the right thing by homeschooling! It's very helpful to read your comments, and also to read your blog and glean from your experience!

Thanks, Jennifer! I enjoy reading your blog too!

I would very much like to see some recent handwritten pages from Pamela's journal.

> I believe Handwriting >without Tears is one of the >best programs in this >category (backed by >research) ...

Did you know that the HWTears site's "research page" citations of studies include numerous misquotations of studies? For instance: Several times on the HWTears "research page," HWTears cites research studies which did not in fact even include HWTears among the handwriting programs studied:
to accomplish this, HWTears has very selectively re-written the material it quotes in order to conceal the fact that the quoted/cited research in fact had nothing to do with the HWTears program.
(Contact me privately if you care for any examples. I would like to know what you think of these facts.)

Kate, everyone is entitled to their own opinion. Handwriting without Tears worked well for both of my children. Other people with autistic children found it helpful, too. I have read a couple of isolated negative opinions in cases where the child still struggled. For the most part, the reviews are positive.

Since everyone has a right to express his or her opinions, you've expressed yours and I've expressed mine. Anyway, I hope you'll enjoy the links to the actual book that the justifiably opinionated Charlotte Mason originally recommended for handwriting.