Blast from the Past: Pre-Writing Skills

Pamela attended special education preschool and kindergarten through age six. Like many children with autism, she has delays in her fine motor skills. Having interacted with many homeschoolers of children with autism, I have found this to be common for our kids. Most children in the autism spectrum, even high functioning ones, find writing frustrating.

In hopes of helping Pamela catch-up with her peers, her teachers pushed too much writing before she was developmentally ready for it! Pamela had not mastered the fine motor skills expected of a preschooler by the age of six. She did not enjoy scribbling and showed absolutely no interest in drawing, and yet her teacher sent home worksheets for her to practice writing like the one pictured here. Whenever I pulled out paper and something with which to write, Pamela let loose a series of piercing screams to show her dismay! 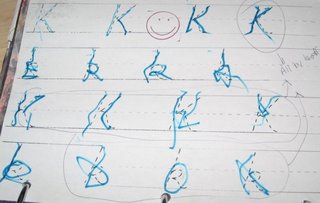 Fortunately, I “met” another homeschooler with an autistic child online—this was in 1994 and such a creature was rare in cyber space. She encouraged me to take a sabbatical from writing and focus upon pre-writing skills to reduce Pamela’s frustrations. My cyber mentor gave me tips from the National Academy of Child Development for assessing her dominance, lateral abilities, and writing readiness. Another homeschooler with an autism child has recorded her experience with NACD in Too Wise To Be Mistaken, Too Good To Be Unkind.

The first problem I identified with my cyber mentor’s help was dominance, or lack thereof. Pamela appeared to be ambidextrous, never having developed hand preference. My friend suggested I check Pamela’s eye, ear, and leg for dominance by observing her preferences in different situations. The ideal is for all three plus the hand to share dominance on the same side. Pamela showed preferred her left side in every part. They all matched, which emboldened me to promote her left hand. As both of her grandfathers are southpaws and people with autism have a higher rate of left-handedness, I was not surprised. Within six months, Pamela became a strong leftie, confirming my suspicions that her Special Education teachers had been forcing her to be right handed. Apparently, many southpaws have experienced problems from inconsiderate teachers!


The second issue I addressed was hand and finger strength. While today many wonderful products are on the market for developing this skill, they were hard to find back in 1995. Back then, stress balls were rare, and the Koosh ball fad had bypassed the Glaser house. The Internet, in its infancy, was devoid of articles with tips on strengthening the fingers and hands of preschoolers or winter fun! I had Pamela play with clay, squeeze sponges and pick up little toys with tongs and with clothespins. We spent time at a playground near our home because climbing equipment develops finger strength among other things.

Pamela’s third challenge involved crossing the midline and alternating feet going up and down the stairs. We did numerous exercises to improve coordination, much like what is available today through Brain Gym. For two years, we got on our hands and knees several times a day, crawling with various patterns. We played handclapping games like Say, Say Oh, Playmate and worked our way up to Miss Mary Mack. Pamela sat at a table, took objects from one side of a mat, and placed them in a bowl on the other side of the mat, one at a time. She did this for each side and eventually learned to do this by alternating hands. She learned to do various knee touching patterns as well and walked the stairs in our apartment complex every day.By the end of our first year of homeschooling, Pamela had mastered crossing the midline and alternating feet going up the steps!

We played hooky from any form of writing for an entire year, and Pamela slowly lost her phobia of writing. While I retreated from writing on paper, we worked in letter awareness in other ways. Ironically, Pamela was already reading, so recognition was not an issue. I had to find some way to introduce motor plans for making letters without having the stress of pencil and paper. Sensory Integration resources like The Out-of-Sync Child Has Fun did not exist, but my friend and occupational therapist, Nancy Kashman, gave me wonderful ideas for blending sensory integration and pre-writing activities like the following:

Pamela educated me about the connection between drawing and writing skills. When Blues Clues debuted in 1996, she became enamored with imitating Steve’s clues and taught herself to draw. As she began to fill pages and pages of clues, her coordination improved greatly. While she would have flatly refused to fill pages and pages of paper with letters, she found clues to be a joy! If a child has no interest in drawing, you might be able to entice them by teaching them to draw their favorite animated characters using simple shapes. I found very basic ideas in books by Ed Emberly and Usborne. I have no natural flair for art, and books like Draw Squad and Drawing with Children showed me how to move past the stick-figure stage! Thanks to her interest in Blues Clues her fine motor skills improved tremendously in just one year as you can see in the following pictures. 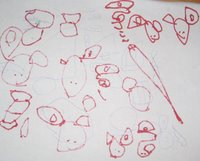 Homeschoolers often worry about documenting progress and providing paperwork for the state. During our sabbatical from writing, I discovered different ways to document knowledge without loads of writing:
Posted by walking at 17:11

Email ThisBlogThis!Share to TwitterShare to FacebookShare to Pinterest
Labels: penmanship

Thank you. You have given me hope. I have recently pulled my 6 year old son.

Diane, welcome to the wonderful world of homeschooling--where every day is a trial and a triumph rolled into one! If you are interested, you are welcome to join my email list, Aut-2B-Home. Email me by clicking "View my complete profile" (the last line in the green box in the sidebar on the right), and I will give you more information.

As a leftie, I am excited to find the lefthanded web site! And thanks for stopping by my blog. I'm learning a lot from yours!
Karla
http://homeschoolblogger.com/karlakakins

What a great resource for my friends with autistic children... Thanks so much, Tammy!

Your welcome, Lorraine! I'm happy to share from the school of hard knocks. :-)

My daughter and I decided to pull my grandson out of public school and homeschool him and our pre-k granddaughter using the Charlotte Mason Curriculum. He did well in the first grade but got lost in the 2nd grade. We are excited and overwhelmed at the same time. Its been a long time since I have had such a challenge. My kids are grown and have families of their own but I look forward to this. I did homeschool my children until I decided to go back to work.

I wish everyone the best. Also, both grandkids are autistic. One is high functioning the other is not.

Any suggestions are very welcome.
There are literally no local support groups for autistic children in our area.
I am thinking of starting a pre school co op and would like to talk with someone that has already done this.

I am on the Ambleside Online Website or you can e-mail me directly at hollandv36@yahoo.com
I welcome any ideas or suggestions.

I'm so glad you found us at the AmblesideOnline forum.