Does your child sprint around the house and dance with joy after a spelling test? Mine does!

I was chatting with a friend with a second grader enrolled in school. Her son was frustrated and bored in spelling class. Here is a sample of his word list for last week:

Spelling (unless you are in a spelling bee) usually occurs while you write real words in real sentences! That is why I love studied dictation: Pamela's "spelling words" are part of a real sentence. She has daily spelling tests and looks forward to them because they are so interesting to her. I will use the poem she mastered this week as an example, City by Langston Hughes. Here is what we do, and you can learn more by getting a copy of Cheri Hedden's presentation on Spelling vs. Studied Dictation:

Day One
I type a poem picked by Pamela, double-spaced in Word. I do alter punctuation and spelling to conform with standard practices if necessary. The first day of a new poem, she copies one sentence (if not too long) hand onto paper as copywork. After copying the sentence, she studies the typed version of it. She gets out a clean sheet of paper, and I read the sentence to her. She writes what she hears in the dictation, and I check it. She used to check for errors, but she gets so excited about how she did she has to run around the house until she finds out.

In the morning, the city spreads its wings, making a song in stone that sings.

This time she made one error! Every time she makes an error in a dictation, I highlight the correct version on the typed sheet and write the date underneath (it makes wonderful documentation). When she studies it the next day, she looks at the sheet and she sees what parts of the poem needs the most attention based on the highlighting.

Day Two
The next day, I wrote a lesson about her error, which was writing spreds. It may look like a worksheet, but this one has meaning and context because the lesson is focused upon learning a word she needs to spell. 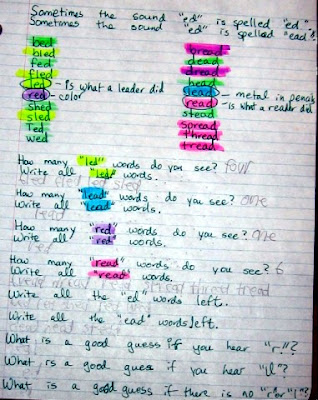 After she finishes the lesson, she studies the typed, highlighted version. When ready, she gets out a clean sheet of paper, and I slowly read the dictation. This time she wrote it perfectly!!!

Day Three
The next day, she copies the entire poem (two sentences). Without realizing it, the spelling lesson from the day before dovetailed nicely with the second verse (bed and head):

In the morning, the city spreads its wings, making a song in stone that sings. In the evening, the city goes to bed, hanging lights about its head.

She studies the typed, highlighted version. She pulls out a clean sheet of paper, and I give her another dictation. And another perfect score! Tomorrow she will be ready for a new poem.

Spelling Tests vs. Studied Dictation
Pamela rarely makes the same mistake twice, but occasionally that happens (most often it is punctuation, not spelling). Some new lines in a poem may take longer than a day or two. But, sentence by sentence, verse by verse, we get through entire poems, some as complex as A Pirate Story by Robert Louis Stevenson: it took her a whole month to master it perfectly, line by line. But, she did! We started with one sentence and worked our way up to all three verses. Her last dictation she wrote all the verses at one time--perfectly:

Three of us afloat in the meadow by the swing, three of us abroad in the basket on the lea, winds are in the air. They are blowing in the spring, and waves are on the meadow like the waves there are at sea. Where shall we adventure today that we're afloat? Shall it be to Africa, a-steering of the boat, to , or or off to Malabar? Hi! But, here's a squadron a-rowing on the sea—cattle on the meadow a-charging with a roar! Quick! And, we'll escape them; they're as mad as they can be. The wicket is the harbor, and the garden is the shore.

This means that she takes "spelling test" every day. What! A spelling test every day? Think about it! There is no big build up to Friday. We spend a total of 15 to 30 minutes in this daily habit: copy, dictate, check, document, and write a lesson. Some days we have no formal spelling lesson or grammar lesson, a reward for a perfect dictation.

I have been using this system since the summer. I do not waste our precious time drilling what she already knows (thus boring her). I target what she needs to know in my lessons. Studied dictation is simple, efficient, respectful of the child. How can you feel like you accomplished anything by just writing a bunch of random words with no meaning or context? It might as well be writing jibberish. Compare that to mastering sentences from a cherished book, the Bible, or an entire poem. Studied dictation wins in a contest against mindless spelling tests every time!

I wish I would have read this before I purchased Spelling Workout for Austin! LOL!

Another inspirational post, Tammy! You always make me think!
Jennifer

If it's any consolation, Jennifer, you might be able to use it for lessons or ideas for teaching specific words he needs to know!

I have a son, 9 today (HF Autistic), who has just started studied dictation. Your post is just what I needed. Thanks for making the process so much clearer.

One question. Who chooses her passage, you or her? Do you always combine copywork with dictation?

1. You do not have to blend copywork and dictation. I am doing this to help Pamela memorize poems for recitation by going through multiple senses (seeing, hearing, writing). I have another post explaining why.

2. The day after a perfect studied dictation, she copies all the sentences learned previous plus one more for copywork. If she made an error in studied dictation the day before, I have her continue copying passages from The Hobbit, but continues to study the same dictation studied the previous day. She repeats a dictation until it is perfect!

3. I have been letting her choose her favorite poems. But, on the new typed sheet, I included the shortest book in the Bible (a psalm) and the Lord's prayer, which she has never been able to recite even though she hears it every Sunday at church!

I am so glad this post was able to clarify things. Cheri Hedden's presentation on Studied Dictation was an epiphany for me!