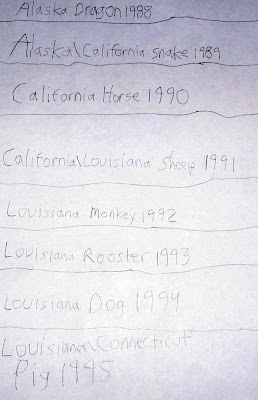 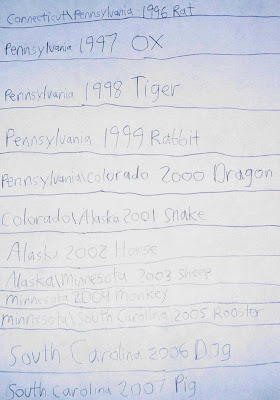 Pamela did not always remember events by date. Prior to 2004 when she started a journal that she kept for about two years, she remembered events by location. Like me (a navy brat), we moved often enough for this system to be helpful as you can see in these pictures. The animals represent the Chinese zodiac.

Her memory of events and dates emerged in the Spring of 2004. The first dated entry in her autobiography, which she wrote without consulting her journal, is from March of that year. It ties into her intense fascination with broken things, too:

I didn't go to mass at March 28,2004. David broke a tape. David listen on another tape. Tammy, David, and I go to a library. We didn't have co-op at 3/30/04. We have haircut in a mall. David visited Merlin. They dropped off Merlin. David broke an arm. David went to the doctor.

I decided to go on a fact-finding mission to see how accurate her memory is. While I knew David broke his arm in 2004, I could only narrow it down to a season: either spring or fall because David missed out on some of the YMCA program which takes a break in the summer and people do not roller-blade during a Minnesota winter. I went to David's journal and confirmed three things Pamela covered. First, we did go to the library on March 29. Second, David did invite his friend Merlin over for a sleepover on April 2. Third, he did break his arm on April 3. (Why do emergency room visits always happen on a Saturday?)

This feat may not be all that amazing. After all, Pamela kept a journal during this time period and one of her favorite activities is to relive the past by pouring through pictures, home videos, homeschooling paperwork, and journals. She stopped keeping a formal journal when we moved to Carolina, which would be July 2005 (my memory system is based on the house in which we lived).

What impresses me is that she must keep a journal in her head. I went back through her autobiography and journal-in-a-box and made some astounding discoveries. I am at a disadvantage because my memories of events are not connected to dates, but I have a little helper . . . the Internet! She remembers these post-journal dates in her head, while I have to look them up online.

* Wednesday, May 31, 2006 - Stayed with Oma and Opa while I went to the Charlotte Mason Conference in Boiling Springs, NC

* January 5, 2007 - Saw Eragon (I could not remember the name of the movie, which Pamela did not record, but she knew it when I asked)

* Friday, March 30, 2007 - Picked up relative from the airport (confirmed by email archives)

* Thursday, April 5, 2007 - Cleaned house before an Easter weekend visit from the grandparents

* Tuesday, April 10, 2007 - Dropped off relative from the airport (confirmed by email archives)

* Tuesday, June 5, 2007 - Stayed with Oma and Opa while I went to the Charlotte Mason Conference

Pamela's journal-in-a-box is complete through the end of June 2007. I have searched high and low for any errors, and I found only one! She wrote that David went to a concert on September 22, 2006, but the Casting Crowns concert he attended was really on November 10, 2006. Wow! Only ONE mistake! If I did not have this blog, I would be lucky to get the year right!
Posted by walking at 07:44

Email ThisBlogThis!Share to TwitterShare to FacebookShare to Pinterest
Labels: hyperfocus

I just wanted to let you know that you have won "The Twelve Blogs of Christmas" contest! You'll be receiving a $50.00 gift certificate from HomeschoolEstore. Please email me at SimpleFolkBlog AT aol DOT com and I'll get the coupon code to you. Thanks for participating and have a very Merry Christmas!

I just wrote this comment in another post...but Andrew has recently decided he has interest in calendars. It is kind of ?? funny?? because i have 'worked' on calendars with him...'how many days are in a week?" is met with a 'huh? 100?' He and DH have perfect memory. That leaves me in the cold! It does bring us to the point of self-directed learning- when he decided to learn about days of the week he got it in about 30 seconds. We'll see where it leads us now!! I FINALLY have him sitting down for math and writing on 'my' terms...short and sweet inconsistent kitty assignments.

Congrats on the comment to the side!!! Whatcha gonna spend it on??

That's amazing!!! I'm often blown away at what our son recalls that we've long forgotten...

And congratulations on winning the contest!