Lisa Cadora's blog post on Grace and Learning got me to thinking about David and his checkered past with math. She described the frustrations of teaching herself to crochet a cool, hip accessory and how much more gracious we are with ourselves than with our students. She concludes,

Charlotte Mason said that the only education is self-education. Did she see that grace is necessary for learning, and that we are most graceful with ourselves? If so, maybe it’s not only that we as teachers must create gracious, grace-ful conditions, environments and relationships in which our students can learn, but that we must bring them to be gracious to themselves.

My husband has two engineering master's degrees, and I have one in statistics. For many years, I thought the math gene had skipped my fifteen-year-old, neurotypical son, David. His temperament is very much like that of my father, who has never met a math problem he liked. Teaching David elementary school math frustrated us both. In hindsight, I think I was part of the problem. I think sometimes, if I had shown more grace, we would have shed fewer tears. Fortunately, he finds algebra and geometry a breeze. Was it maturity and a leap in abstract thinking or a more gracious attitude from me?

I think grace in learning might be related to masterly inactivity (wise letting alone). Elements of masterly inactivity include "authority, good humor, confidence, both self-confidence and confidence in the children," which I lacked because I assumed David would always struggle with math like my father. I stopped looking him as a unique person and saw him as a mirror image of my father because they have so many personality traits in common.

Charlotte Mason believed that we should be gracious enough to let children take personal initiative in their work (page 37-38):


In their work, too, we are too apt to interfere with children. We all know the delight with which any scope for personal initiative is hailed, the pleasure children take in doing anything which they may do their own way; anything, in fact, which allows room for skill of hand, play of fancy, or development of thought. With our present theories of education it seems that we cannot give much scope for personal initiative. There is so much task-work to be done, so many things that must be, not learned, but learned about, that it is only now and then a child gets the chance to produce himself in his work. But let us use such opportunities as come in our way.

On the flip side of this coin, we hurt our children by letting them get so frustrated that they develop the habit of tears. I think we also must keep in mind scaffolding, being alert when to step in and support the child and when to step out a la masterly inactivity. The geometry problem above is a great example. David had to figure out the measurement of each angle in the problem, based upon the diagram and information provided. He had to apply the definitions of bisected angles and right angles, the relationship between vertical and supplementary angles, and the sum of interior angles for triangles (180 degrees) and quadrilaterals (360 degrees). What made this problem difficult is that one wrongly calculated angle would create a domino effect of errors. 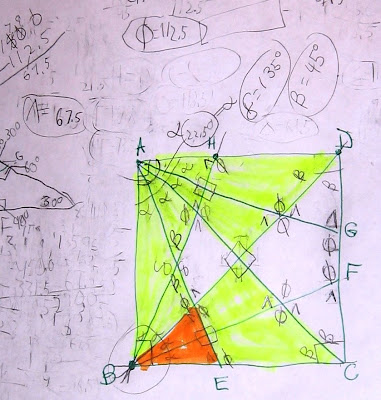 Applying masterly inactivity, I left David to his own devices. He worked his way through the calculations and figured out the angles for about five shapes before coming to me because the problem stopped making sense. Then, I switched to scaffolding and congratulated him for recognizing when he was stuck. I studied his work and noticed an error. I erased all of the mistakes and highlighted what was correct, and he went back to work. He went back and forth with me several times, getting frustrated at himself for his errors. Rather than joining him in his vent, I told him about Lisa's blog post about giving yourself grace when making mistakes. I even emailed it to him later in the day. I reassured him that the problem really was challenging and got him back on track.

In the last round, he made another little mistake and I decided to put all of the formulas into a spreadsheet to make sure I was on the right track, too. As I built the spreadsheet, I realized how complicated the problem was. At that point, I was so thankful to have read Lisa's post that morning and let grace win the day.
Posted by walking at 21:31

Oh crud! Am i gonna have to teach this stuff someday??? I do NOT remember even remotely seeing this this stuff in school.

Oh, Queen Mum, you have a degree in Mechanical Engineering, so I know you'll get it when the time comes. Plus, Math-U-See has a DVD, and I just let the instructor teach David. I am more like his tutor now! Kicking up my heels and Snoopy dancing!!!