This morning, we spent two hours at the Living History Encampment at Camp Bob Cooper. People dressed in Revolutionary Era costumes manned twenty-three stations, where they displayed primitive skills, crafts, and demonstrations. The South Carolina Legislature designated February 27 as General Francis Marion Memorial Day. Part of Mel Gibson's fictional character in the movie The Patriot was loosely based (and exaggerated) upon Francis Marion, or the Swamp Fox, a revolutionary war hero known for his guerrilla warfare tactics. He is so popular in these parts that they hold annual symposiums and paint murals to commemorate his engagements.

We met some homeschooling friends there: David headed in his own direction, and Pamela and I explored together. David learned some interesting facts at a Carolina trading post, where the interpreter pointed out a historical document that will be a great supplement when we hit the Colonial Era in American history: A New Voyage to Carolina by John Lawson. David enjoyed being part of the action: he threw an ax, carried buckets of water with a yoke on his shoulder, wielded weaponry like a grenade and swords, learned about making stinky soap (no wonder they bathed only twice a year), and observed them firing a tennis ball from cannon. Pamela and I flitted from fire starting and a British officer encampment to looms, weaving, and woodcarving. She enjoyed sensory aspects such as feeling the different kinds of fur (buckskin, deer, rabbit, etc.), touching musket balls (recalling Pa making bullets in the Big Woods), and running her fingers along the pretty beads.

I enjoyed learning about British coins they had on display: copper coins like the farthing (1/4 pence), ha'pence (1/2 pence), pence, tuppence (2 pence), thruppence (3 pence); silver coins like half a shilling (6 pence) and a shilling (12 pence); and a gold crown (5 shillings). We also learned that the idea of a dollar came from the Spanish pieces of eight. The coin was soft enough to cut. You literally cut it in half to make a half dollar and in quarters to make a quarter of a dollar. The term buck came from the practice of treating a buckskin like a dollar when cash ran short. Pamela signed up for the militia and received an enlistment bonus in Continental cash (which was worthless at the time). 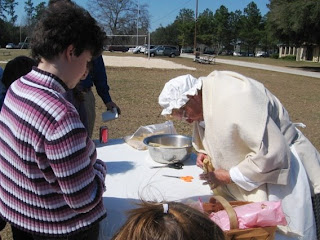 The highlight of the afternoon was making a cornhusk doll, which turned out to be an RDI-like activity. The lady making Pamela's doll was not as wordy and full of stories as the other one and suited Pamela perfectly. She explained to Pamela each step of the process as she put on the arms, skirt, scarf, belt, and bonnet. She waited very patiently for Pamela to do her part and I did as much nonverbal scaffolding and referencing as I could while helping Pamela figure out what to do. 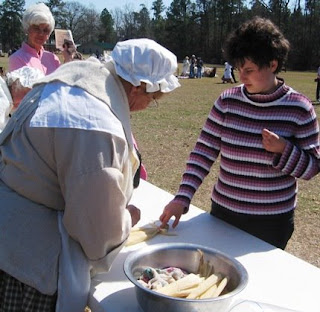 The dollmaker even asked Pamela to hold down the string with her finger. I was glad because Pamela did not mind the doll's wetness for they cannot work with a dry husk. I did not capture it in the photos, but Pamela wore a sweet smile on her face because she was so thrilled to have her very own cornhusk doll. She even waited for the lady to make two dolls before it was her turn! 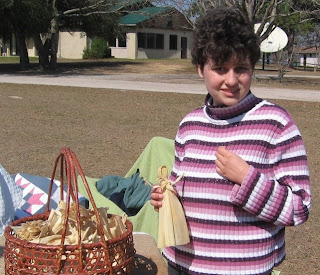 Another thing I liked about the dollmaker was her kindness. She was very sweet to Pamela, sensing her quiet, gentle nature. The next child in line was a boy who wanted a boy doll. The dollmaker had not made one yet, but she improvised by making two legs and a cape, which, of course, the boy turned into an 18th century flying super hero. 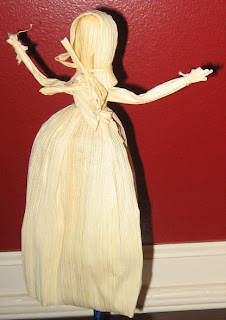 Pamela's new doll needs to dry a couple of days. She named her Charlotte. Why Charlotte? Well, that was the name of Laura's first rag doll named Charlotte!

We joined some friends for lunch on the lake and spent much of the afternoon outdoors watching the birds and basking in the sun. You would think that was enough socialization for one day. But no, we pigged out on shrimp, oysters, and chili at a neighbor's house for dinner. Our neighbor is also gluten-free, so they even had Pamela friendly pretzels and brownies.
Posted by walking at 21:40

Email ThisBlogThis!Share to TwitterShare to FacebookShare to Pinterest
Labels: history

so much fun! and most jealous of how wonderful the weather looks!

HEY!! Thanks so much for commenting on my blog. It's been a long time away... but I'm so glad to be back -- and welcomed by a comment by you. THANKS

What a neat day! We have to make it to one of their next events, I know my kids and dh would love it! Thank you for your comments on my blog! My xanga site is much more alive and I am quite new to blogger, so it was special to check in and find some feedback. ~ LeAnn

Queen Mum, sorry to rub it in about the weather! I know how you feel having spent many years north of the Mason Dixie line.

Welcome back, Jennifer. Glad you got your new computer.

LeAnn, I did not find out about it until the night before. If I get a greater heads-up, I'll let CMinSC know about it!