RDA 3: Dad Onboard with RDI 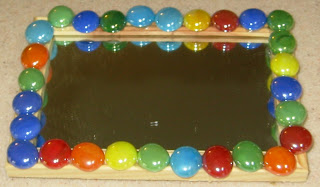 Pamela and our consultant made this beautiful mirror during their session yesterday. To wrap up RDA segment one from yesterday, Steve and Pamela worked together. I watched them on television, and they blew me away. Steve has never gone nonverbal with Pamela, and I was so amazed at how well he played, made things up, and hung out with Pamela. Another fascinating tidbit popped off the screen. Pamela works so hard when she speaks because of her aphasia (the consultant, an SLP in a former life, completely agrees with what I have thought along: aphasia, but not apraxia). She feels so incompetent with her verbal skills that Pamela and Steve fell into rigid, static conversations (maps, highways, calendars, and any topic in which she excels). If you try to get her off the Pamela Express, Pamela gets annoyed. However, when Pamela and Steve went nonverbal, her interactions were so beautiful, expressive, fluid, dynamic, go with the flow. In fact, you would not see autism right away when she is nonverbal. 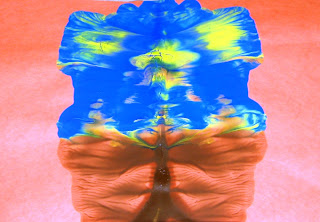 Yesterday, Pamela and I made this picture by putting paint in the middle of a piece of paper, folding it in half, and squishing it. We agreed it looked like flowers in a vase. After Steve and Pamela finished their session, we sat down with the consultant for RDA segment three. She gave us a great overview of RDI, comparing the behaviorists approach versus the developmentalists approach, covered the five core deficits, explained how the operating system is set up, compared parent objectives versus child objectives, etc. Steve finally saw how the scattered pieces of what I have been doing for years on instinct have enabled Pamela to come as far as she has. The consultant told him that Pamela was the first client to arrive in her practice with apprenticeship and co-regulation nailed in place.

One thing that blew Steve away was how scattered Pamela is in her development. He did not realize that Pamela's savant skills with calendars and her ability to work at a sixth grade level were purely static thinking. He was shocked to hear that stage two represents the relationship skills of children between the ages of 18 months and 24 months! I expected this (actually expected a younger age). Her dynamic abilities shoot up when she is nonverbal; but, when she is verbal, she goes very static and rigid.

Our consultant impressed me with her ability to uncover Pamela's strengths and weaknesses. She definitely knows autism inside and out!!!!!! She helped me put into perspective how various things I did on instinct helped Pamela become an apprentice and co-regulate. I cannot emphasize enough how well she did with co-regulation, especially when going nonverbal.

Her co-regulation breaks down a bit when verbal because she falls into static routines. Steve and I experimented with getting off the Pamela Express at lunch. She tried to loop us into one of her rigid conversations. First, she hit up Steve and he stayed off the train by speaking declaratively about other topics. Then, she turned to me and I was more emotional. I would pout and say, "I'm tired of talking about highways. I want to talk about what we are ordering for lunch." When I failed her, she went back to Steve, even poking him, which gave us another topic. "That hurts! I don't like getting poked." She tried about five or six times and finally stopped pestering. Then, I made faces and did some nonverbal interactions to get her thinking nonverbally. She relaxed and went with the flow in her verbal exchanges.

We need to work hard on separating Pamela's awareness of self with her awareness of others. She tends to apply everyone's conversation to herself. So, when her aunt talked about her parents planning to sell their house, Pamela yelled, "Don't sell the house." So, I pointed to Brenda and explained, "Aunt Brenda's mom and dad are selling their house." Then, I pointed to myself, "Daddy and I are keeping our house." I have a hunch this technique will be a great way to separate self from others during conversations.

The consultant gave me some clear directions on what I need to do in the next two weeks: blitz and film some interaction patterns to fall back on when Pamela becomes unglued, figure out what objectives need work (both parent and child), pick a parent and child objective of interest, etc. Steve will be doing one e-learning assignment at a time to get up to speed. While I am doing the bulk of the work, he will go with the flow with me more easily once he understands RDI more. 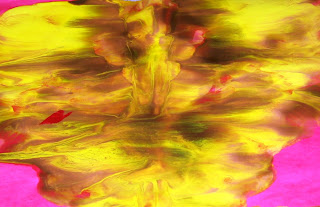 Here is the second squish picture we made yesterday. It started out as a hamburger with mustard but it looks like what ends up on a diaper.

We still have three more segments of the RDA left but will be doing them nonverbally over the next couple of weeks.
Posted by walking at 20:10

Email ThisBlogThis!Share to TwitterShare to FacebookShare to Pinterest
Labels: co-regulation

Tammy, aren't excellent RDI consultants worth their weight in gold? Sounds like she nailed it.
So cool Steve is so on board, that makes a HUGE difference. Not all of us had that advantage. So were you impressed with the scope of the objectives especially compared to the old tracking system?

You wrote: "Steve finally saw how the scattered pieces of what I have been doing for years on instinct have enabled Pamela to come as far as she has."

Hooray! I am glad you got that validation; I am happy for both of you. It must give you and Steve confidence for the next stage of your journey.

I love the squish pictures.

I've been interested in your blog for some time now, but never commented. My background is in special education, and in the midst of childrearing, I occasionally work as a consultant for LD, primarily with Christian home school families. My faith in God is constantly strengthened when I see God give parents necessary wisdom to make right choices with their children who have disabilities. Sometimes the parents don't even recognize what God has done because they don't know they've been doing exactly what I would have recommended as a professional. It is fun to share with them how God has enabled them to make decisions (even contrary to the advice of homeschooling "experts.") that are inexplicable except through His grace.

I'm glad you've had this opportunity; thank you for sharing it.

Dear Tammy,
Hurray! I'm so happy for YOU and your family. Your children are wonderful. Wishing you a great Mother's Day. sincerely, Diane G.

hey tammy! i started up a new blog and wanted to link up to you right away. i can't wait to read all your posts...you have so much great information to share. anyways...i am one of the folks on your aut2bhome list. nice to see you!

Diane and all the moms! I hope y'all had a wonderful mother's day!!!!!

Poohder, Yes! I am excited that our consultant AND Steve and I are united on this! Steve can be a big help in responding when Pamela transfers what she learns to their interactions AND he can support what I am teaching her.

Feisty Mom, the squish pictures are fun! They are like the Rorschach inkblots, only FUN!!!!

Michelle and Max's Mom, thanks for commenting. I look forward to reading your blogs!

so excited for you...can you explain further that paint squishing thing? since i'm gathering you don't need to touch the paint it might be a good one for us.

Squirt paint onto a sheet of construction paper. Pick one, two, three different colors. Fold the paper in half and squish it. Open the paper to see the picture.

You will need paper towels! If you squirt too much paint, it will escape out of the top, bottom, and side. So, it may not be completely safe Queen Mum . . .