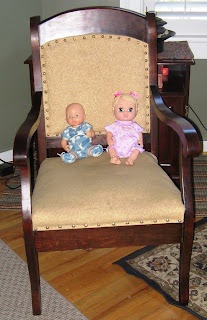 Before I launch into the joys of studied dictation, I thought I'd share two pictures of Pamela during her break. Below, you see her watching television. And to the left are the babies (NOT DOLLS) watching television with her. She put them there! 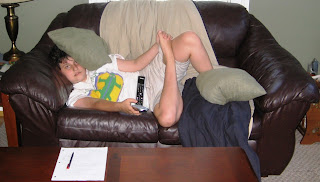 Charlotte Mason's method for teaching language arts is based upon child development. Rather than forcing paper skills on children at younger and younger ages, desperately hoping to give them a head start, she believed in laying a foundation for writing through oral language. In her first book, Home Education, her recommendations for children under the age of six are vastly different from that of older children because she believed in the outdoor life for the little ones. She required NO formal lessons for preschool and kindergarten. Zero. Zip. NADA!

In those tender years, she focused on oral language. She believed children ought to sharpen their speaking abilities by telling what they see in their explorations outside. An educator broadens vocabulary by supplying unfamiliar names for and parts of objects found by children and improves listening skills by sharing what she sees and asks thoughtful (not gotcha) questions. To hone articulation, she encouraged reciting sing-songs in English and another language. Those of you with children who struggle with fine motor skills or visual discrimination take note! There are no worksheets and no required reading. Those of you with kids who treat carpet squares like trampolines, there are no prolonged periods of sedentary boredom!

Charlotte recognized that some children under the age of six have a keen interest in letters and reading. She did not see anything wrong with teaching letters and their sounds to kids who were ready as long as it seemed like play and stopped when the child tired of it. She outlined reading lessons combining both phonics and sight words for children once they turned six. Six was not a hard and fast rule for some children bloom later (the appendix of School Education includes a narration by a child of age 7 3/4 in the lowest level class in her school). She also worked on the written expression of six-year olds through penmanship and, once they knew all of their letters, copywork from living books that they read. Copywork focuses attention on spelling, grammar, and punctuation and builds the foundation for learning the mechanics of writing. Here is an example of Pamela's copywork right now: 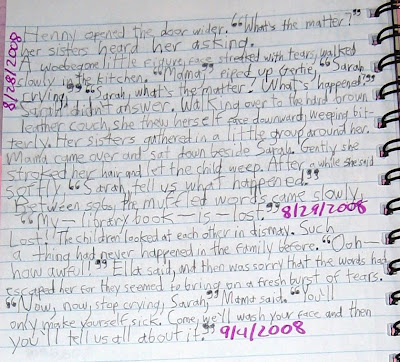 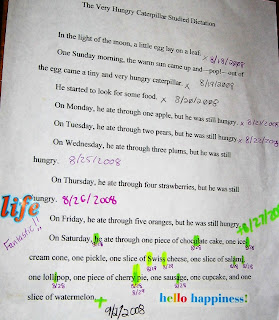 When Pamela requested doing Eric Carle books this year, I agreed because some contain quite challenging words. We started off with The Very Hungry Caterpillar two weeks ago. I decided to have an English notebook to store Pamela's copywork, poems for recitation, and studied dictation. Here is the sheet Pamela studies, which doubles as a record of how she fared. 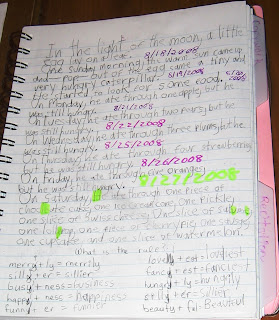 You can see in the page on the left the first eight days of writing were perfect! She made several mistakes on the ninth day, which contained many challenging words. I wrote a lesson focused on three errors: changing y to i when adding a suffix, listening to vowels in the middle of a multi-syllabic word, and contrasting long e at the end of English words versus Italian words. I wrap up the lesson with application of what was covered in the form of a caterpillar story as you can see below. 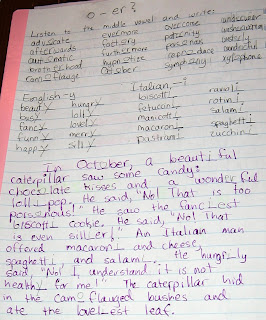 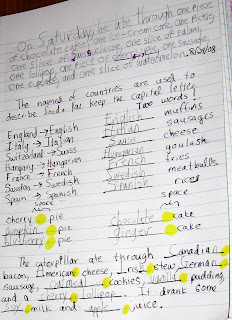 Clearly, my lesson was effective for Pamela did not make those mistakes again in her second attempt at this sentence. The next lesson covered the mistakes made on the tenth day: capitalizing words derived from the names of countries, listening to the ending of words, and placing a space between adjectives and nouns.

As you can see, both lessons worked. Her third attempt was perfect!
Posted by walking at 20:20

Last year (about April), My husband informed me that he didn't think my homeschooling was that great. it's not traditional. homeschool, duh? anyway, I begged and pleaded and tried to give him a little more of my time - balance- and we are homeschooling again this year. What I have seen is wonderful. My son was told by a teacher that he was "bad in math and a bad boy." This put up a mental block for him that has been very difficult. However, this year I am actually seeing him do subtraction easily. AND it's because last year we did NOT do worksheets! I love this post! I love your lesson with the hungry caterpillar. How did you ever think of all the extra stuff? The countries and food. I love it! Thank you, thank you for sharing this. Sincerely, dianeG

Hey Tammy,
Pamela is doing so good, I try to read your blog @ day and she is really coming along!!! You go girl- Pamela!!!

Well speaking from one nontraditional momma to another, tradition is overrated! Congratulations for marching to your own drummer. Is your dh starting to see the light?

Whenever I do a spelling lesson, I try to think about a compare and contrast so that she learns that English has no hard and fast rules. Often, foreign words are exceptions so I look for that connection whenever appropriate.

How do you know how to make up these lessons for Pamela? Is that part of the Association Method, or do you just know what to do?
-Phyllis

Phyllis, the beauty of studied dictation is that it is efficient! When Pamela makes no mistakes, it means I do not need to teach any lessons. When she makes mistakes, then I teach lessons on what she missed. I base all of my lessons on her errors to spotlight the letters that were wrong (often by comparing similar words) or the proper way to use commas or how to add suffixes.

Phyllis, I forgot to mention about the association method. I plan to blog that soon. The association method has elements of Charlotte Mason, but I use it strictly for building up Pamela's understanding of syntax with syntax-controlled readers that are not living books. I think of it as focused speech therapy.

When I talk about oral and written narration, recitation, copywork, and studied dictation, it is along the lines of how Charlotte Mason described it in her books.

I posted this information on an email list which recaps the lessons we covered through The Very Hungry Caterpillar.

I know it sounds too easy and too quick, but it works. Pamela just finished doing studied dictation of the entire book, The Very Hungry Caterpillar. We work on a page of text until she does a perfect dictation. Here is a list of the mechanics mistakes she made in the past 2.5 weeks that we addressed:

* Capitalization: she capitalized "he" in the middle of a sentence and forgot to capitalize "Swiss" (the good news is she always capitalized the days of the week and the first word of every sentence).
* Spelling: she misspelled these words and I did spelling lessons through word analysis for the following words: built, cocoon, chocolate, lollipop, salami, Swiss.
* Punctuation: she made "cherry pie" a compound word and made one run-on sentence when it should have been broken into two.

In twelve days of studied dictation, she had perfect dictations on eight days. On the other four days, she had lessons that addressed the specific errors. I find studied dictation an efficient and meaningful to cover, not only spelling, but other aspects of mechanics!

I'm a little confused, though, about how dictation leads to better composition (as opposed to better dictation-taking). I'm also not QUITE sure about how you decide what to teach.

I mean, I see that you're, in essence, just correcting errors as you go along. But am I right in thinking that instead of looking at larger picture topics (plurals/singulars, for example), you're teaching specific instances of plurals/singulars? Will Pamela know, in future, that any word that ends in a "y" gets an "ie" if it's a plural? Or will she simply know how to write cooky/cookies?

I ask in part because the whole issue of generalization is tough, especially with our crazy mixed-up English language. How DO you help her generalize grammar rules without multiple examples and drills??