The Trip to New Orleans

Why am I up at 5:30 blogging? All these words are rolling around in my head. If I don't get it out of my system, I will not be able to fall back asleep! So, there! 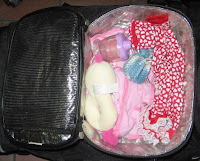 We woke up at four in the morning yesterday. Pamela dressed, played on the computer, and watched television while we got ready to go. At about 5:15, we were gearing up to leave the house and I noticed Pamela was holding a little bag that she used for storing her tape cassettes for stimming. Rather than tell her imperatively to put it away, I looked at it with curiosity and said, “I wonder what’s in the bag.” I held out my hand and Pamela brought it to me. When I opened the bag, I was in awe! Pamela had backed all of her baby essentials in the baby’s own luggage! That right there almost made the trip worth it because it seemed like she was trading her stimming for people!

We drove an hour and a half to Charleston and checked our luggage in the dark, hoping to avoid the Nor'easter that had already plunged temperatures into the sixties. Pamela traveled light. She wore her purple backpack with its solitary spiral notebook and pencil. She carried her babies, Baby Alive and David, and their luggage. A couple of times, Steve asked her if she wanted to put them in her backpack for our convenience while going through security checkpoints. NO! Those were her babies and she was treating them like real people. She hung onto them for the entire trip. The man at the curb of the airport said, "Now, don't drop your baby!" She gave him a double-take and replied, "You're joking! Comedy!" 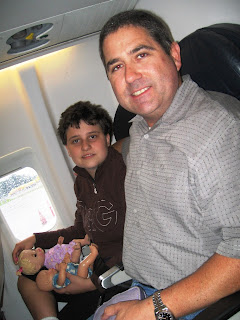 Pamela loves flying and riding buses, escalators, elevators, trains, and subways, so she finds navigating in and out of airports easy. We took an early flight to Houston and had about a ninety-minute layover before catching one to New Orleans. David and I giggled our way through the cheesy shopping catalog in the seat pocket. I could spend an entire post about the burp gun, marshmallow gun, and myriad of useless gadgets that would make Billy Mays weep. On one page is a sappy pillow with the words “Kiss me before you fall asleep” and on the other is a dog tag that says, “I like to kiss my dog.” EW! 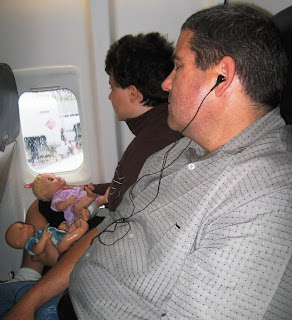 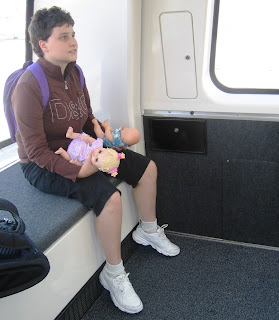 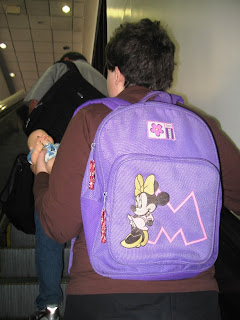 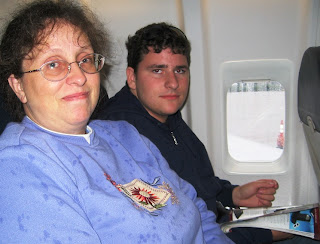 David lucked out on the last leg of the trip. Since Steve has a platinum card with that airline, the computer upgraded him to first class. He wanted to sit next to Pamela, so he switched with David. Imagine being sixteen and flying first class! The second flight was the worst for me. The pressure on my eardrums was fearsome, but they withstood the landing. I felt like I had vertigo for the rest of the day and my left ear did not clear up until the next day!

We arrived in New Orleans hassle-free, rented our car, and headed to the French Quarter where our hotel is. Driving from the airport downtown was a shock. The landscape has completely changed right down to the sound barriers along I-10 and the massive pumping station adjacent to it. The old, rotating cow along I-10 that amused on my way home was gone. Familiar buildings are damaged, restored, or gone: so many complexes in sad condition or newly restored. Katrina happened three years ago and completely changed the face of New Orleans.

When we arrived at the hotel, we bumped into Pamela’s aunt and mother of the bride, Janet, and the bride, Alyson. Pamela had not seen Alyson in about five years because the few times we have visited family in Louisiana she was either attending college or working in Mississippi. At first, Pamela had no idea who this strange woman was and her face was completely blank. I said to her, “Pamela, Alyson is a grown up and ready to be married.” Suddenly, her eyes lit up and an enormous grin bloomed on her face when Pamela finally recognized her cousin.

After we checked-in, we collapsed in our room for two hours before getting ready for the next item on the agenda, the rehearsal and rehearsal dinner.
Posted by walking at 05:39

Yeah Pamela. I am so happy for you. keep up th egreat work and hove fun.

Oh wow, that is SO awesome about packing the bag for the babies!! WOW.

love hearing about it in real time!!!

Jamberry, I know! I am so glad we never "taught" Pamela how to play with dolls so that we could have the opportunity to see this bloom.

Queen Mum, Pamela and I both need down time, so I have had a chance to blog some of our trip. I will not be doing much blogging until we get home because we will be staying with Steve's parents tonight and traveling home tomorrow.

i loved the packed bag for her babies - priceless!