In September, I wrote a post about dynamic thinking and Greg Tang's Math Appeal, which we finished two weeks ago. Why dynamic thinking? Pamela thrives in static situations: predictable, expected, orderly, and sequential. She has a keen eye for patterns and details as a result and has no problems learning anything that has a logical procedure with very little ambiguity.

When you think about how many of us teach children math, we tend to do it in very static ways. According to his biography,

Greg Tang was tutoring math in his daughter's class when he noticed something interesting about the dominoes they were using. Each white dot had a pencil mark on it, which meant the children had been counting them one at a time. Mr. Tang taught them to look for patterns instead, and to add and subtract groups of dots in order to calculate the dominoes' value quickly. From there, he developed a new method of teaching arithmetic in a visual and spontaneous way. His method teaches both computational and problem-solving skills, and is so fun and challenging that children forget they are learning math! He believes that all kids are capable of doing well in math, and he has a mission to make math a natural part of every child's life.

The other day I was checking David's statistics problems by hand and something about static thinking hit me. Math is not his favorite subject, so he prefers sticking to procedure. He put his number in order and then added them. As I studied the number, I noticed that, by ordering them slightly differently, you could line them up nicely in easy to add groups. Of course, when I pointed it out to him, he rolled his eyes and told me that was too complicated and he would rather add them up the hard way! LOL! Maybe, this sort of thinking only appeals to geeks like me! 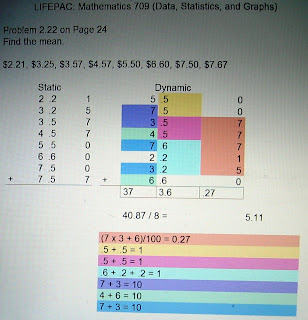 Lately, Pamela has shown some signs of dynamic thinking in math. She has been counting down the days to Daylights Savings Time. By noon today, she had already reset the kitchen clocks in anticipation of the big event. She told me we are now living in Houston time (my sister lives near Houston, and my parents are visiting her right now). I ought to be thankful that Pamela is a flexible enough thinker not to wait until exactly two in the morning to make the switch! But, that is all static stuff.

We were talking about whether we add or subtract an hour. Pamela told me subtract without hesitation. Then, I reflected on a verbal way of remembering the time change, "Yeah. I always remember fall back, spring ahead."

Pamela gave me her nonverbal image, "No! Leaves!"

I spotlighted her idea, "That's right! The leaves fall off the trees in fall."

Then, I said, "The leaves grow back in spring. Just like addition!"

That is a very cool way to remember and I would love to know of any other person on the planet who shares that image. What I love about it is that, instead of some rigid mnemonic, she came up with an unforgettable idea, rich in meaning and context.

But, wait there's more! The other day, I noticed that Pamela diverged from the way that I taught her to borrow and carry. Instead of writing the number to carry above the top digit or crossing out the number from which you borrow, she rewrites the digits to be changed. There is absolutely nothing wrong with coming up with your own way of doing math, as long as it is logical and correct! 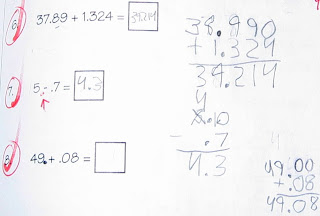 Next on the agenda for encouraging mathematical thinking are more books by Greg Tang. Although they cover skills Pamela mastered years ago, I am doing a "redo" in the true spirt of RDI. Think about the math she learned procedurally in more dynamic ways:
Grapes Of Math
Math for All Seasons
Math Fables Too
Posted by walking at 12:32

Thanks for this post--Tammy, your timing is PERFECT for us...!!! I've realized that Alyssa's doing more math in her head than I knew, something not evident when she has a worksheet shoved in front of her...

P.S. Penny, I have advanced degrees in mathematics and I do believe worksheets does not a mathematician make!

I love Pamela's fresh take on the "spring forward, fall back" theme!

how clever - love it!

Today, we did the page "Easter Art" in Math for All Seasons
. We found four different ways to count the eggs in groups of two! Talk about dynamic thinking!