Today we celebrated Veteran's Day by attending our town's first annual Veteran's Day parade, which started promptly at 11:00 AM on November 11. Bravo Zulu to all of you veterans who served our great country! Thank you for your service! 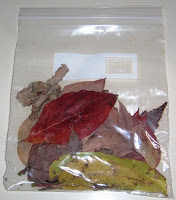 After the parade, Pamela and I collected some fall leaves for a friend in Florida, whose children have never seen snow, much less autumn colors. We are goint to try to rectify that situation in a small way. It is a lot easier to mail leaves than snow! Afterwards, Pamela enjoyed the neighbor's swing before we headed into the house to get ready to hit the store.

We continue to investigate what forms of uncertainty make Pamela anxious enough to go static and stimmy. I am fairly certain that not knowing what hidden things are do not fluster her one bit. This package for someone at church has their name in care of me. It sat in Pamela's view all day and she never asked what it was and to whom it belonged. She does not the recipient, and I am surprised she did not ask.

After the parade, I put two of these buttons in my jeans pocket. Before we left for the store, I put my hand in my pocket and said mysteriously, "I have something in my pocket." When she asked what it was, I smiled but didn't give her an answer. She showed no interest until I mentioned it again in the parking lot. I put one on her zipper handle and began jiggling it. She said, "Rattle!"

Uncertainty about Directions
Pamela has a keen sense of direction, partially because of her eye for pattern and because we have been so many places. She was born on an island in the Aleutians, halfway between Russia and mainland Alaska. She has lived in thirteen different homes, not including three weeks in a high-rise apartment in Santiago, Chile and three weeks visting family in El Salvador. She does care about routes and even tells Steve which road to take home sometimes. I tested her yesterday and today by taking round-about ways to wherever we were going. In both cases, we traveled down streets we have never seen. Pamela asked, "Where are we going?" I scaffolding by telling her our destination and adding, "We are exploring right now." Pamela was not a bit angry or concerned. In fact today, she said, "New. Brand new" when we entered an unfamiliar neighborhood.

Next time, I plan to remove the scaffolding by having a destination in mind, but not tell her. I am not sure how Pamela will take that level of uncertainty.
Posted by walking at 13:19