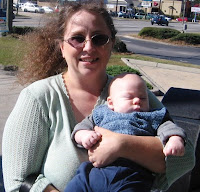 Today, a gorgeous sunny day with a bit of a breeze going, Pamela, David, and I met up with the entire Jamberry and Habeeb crew (Sly, Jman, SB3). The only one missing in action was Steve, who was helping out Tammy's brother with a favor. The next time, Jamberry and her boys--all four--will stay with us so that we can talk without Pamela and Jman looking for an escape hatch from the chatty mommas (actually, they were both VERY patient). I loved holding SB3 and got to see the gamut of his emotions: placid, sleepy, hungry, poopy, and giggly. Yep, I saw him laugh, and he was sooooo cute.

I enjoyed talking to Jamberry and Habeeb, fellow boat schoolers. How often can you talk about the Dark Ages, going over the wall, getting fried, Storm Brother's ice cream, Annapolis' version of the Ho Chi Minh trail, women's glee club, itchy wool uniforms, peacoats, overcoats, and reefers? See what I mean! You don't have a clue what any of that means. Not even Steve, the 16-week wonder, knows what some of it means. 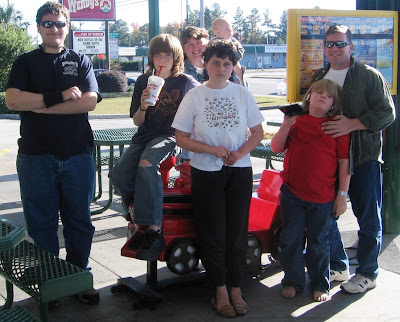 Before moving onto my dog, I wanted to address Penny's comment from Monday's post, asking if Bob's Red Mill withdrew their oats a few months back because of gluten contamination. I was not too worried because Pamela showed no signs of a reaction to the cookies or eating an entire bowl of oatmeal for breakfast. I emailed the company and, within 24 hours, they replied,


Our Gluten Free Oat products were withdrawn from the market for a few months because of a bad flavor and odor profile caused by the way they were processed. Our supplier has since updated their processing procedures and we now have a limited supply of Gluten-Free Steel Cut Oats. 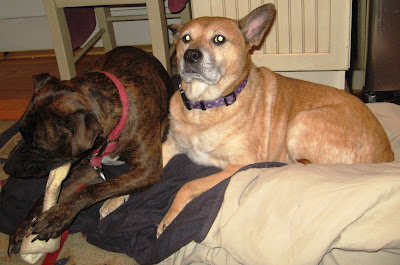 Now, onto Loa, the GF/CF dog (the fawn colored one on the right) . . . ever since we moved to Carolina, we have struggled off and on with major skin problems. The first thing we treated was fleas, something unknown to her when we lived in Colorado, Alaska, and Minnesota. We got the fleas under control, but she continued to have unpredictable breakouts, which we thought might have been fleas. We got very aggressive with weekly flea shampoos and bimonthly treatments, but no change. The only thing that ever cleared her up were antibiotics and steroid shots, unhealthy for her in the long run. We even did the protocol recommended by the vet: Omega 3 oil, Benadryl, weekly baths with a special creme rinse, hot spray for new open sores, and dog food for sensitive skin. Even our most dedicated efforts failed. He finally told u$ Loa may re$pond to low-allergenic pre$cription diet.

Fortunately, what I learned with Pamela helped. At first, we tried Hills Prescription Diet canned z/d dog food. The vet prescribed antibiotics, but no steroids, so we could see the effect of the food sooner. She did very well for a week, so we bought more of the same plus Royal Canin's Potato and Duck dry dogfood. For two days, I caught Loa gnawing on rawhide and she had another breakout. Rawhide may cause allergic reactions, so we only let the healthy-as-a-horse dog chew them.

We started alternating between the two foods as a hedge against further food allergies. She got better and finished off the antibiotics. Last weekend, we ran out of Benadryl, and she had another breakout. I began to suspect the canned stuff, mainly because it had corn starch. I bought more Benadryl, so now we are doing the med and the corn-free potato and duck dogfood. If she stays clear for a week, then I test her with the canned dogfood with the corn starch for a test. I could go on and on with the variations I will have to do to isolate the culprit. Most of you know the process because you have done it with your autistic children. Happy, happy, joy, joy!
Posted by walking at 18:55

How fun you guys got to meet up!!

first..how fun! i must get courage for a road trip to see my cyber friends. think DH will buy us a winnebago...but then i'd have to learn how to drive it..

second.. on the rotation and other food allergies.... i am assuming you did all this but have you looked at yeast? that is the main culprit on WHY people develop the other food allergies. i have heard from numerous sources on how that needs to be tackled (and there are dozens of ways to do that...) and then you dont have to worry (as much) about new food allergies... just a thought...email if you wish more info. we are FINALLY getting at Andrew's yeast issues. we did test him for it and he does have them bad.

Yea, Road Trip!! It was AWESOME meeting up again. Hooray for cyberfriends, especially when they can become skin friends for a while too!!! :)