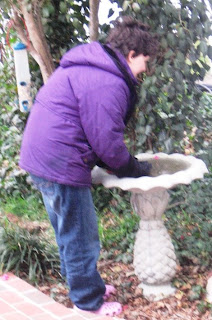 One day with snow flurries is very rare for our part of the country. Two days in two weeks are downright shocking! Yesterday was another snowy bird day for us. It seems like the colder the weather, the more we see the birds. It is the only consolation for frigid weather that I can imagine in my chill-despising birdbrain! Pamela noticed the flurries, bundled outside, and enjoyed the super-light flakes. She put her hand on the frozen bird bath, too. The only way I could capture the snow on film was with the backdrop of our possibly one-hundred-year-old camellia bush (yes, that is a bush). 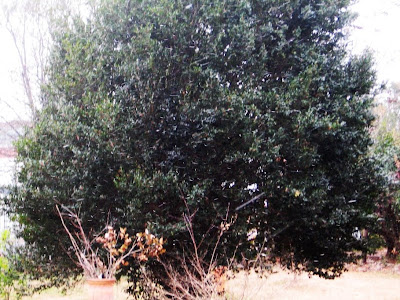 We saw the usual suspects but I was able to capture mourning dove on the frozen bird bath (before I melted the ice with hot water) along with a dashing chipping sparrow and two house finches at the feeder. Later, I got a nice shot of Mr. and Mrs. Dove on the ground. I will never say I like the cold! But, I am starting to appreciate it more! 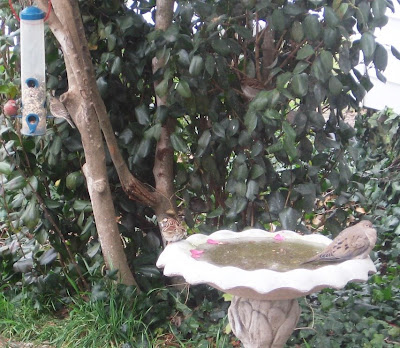 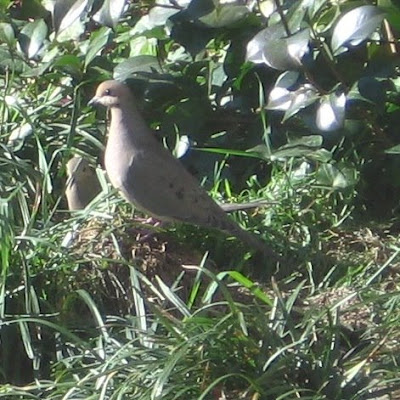 Later, I shot some bold chipping sparrows at the bath and I love the one in flight in this shot: 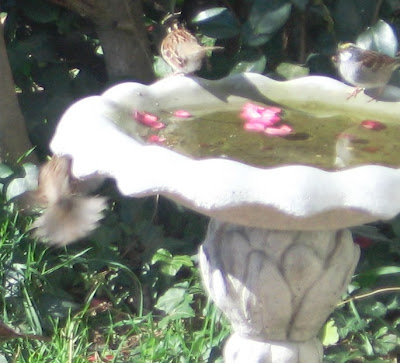 The brown thrasher is a very shy bird. Every time I sneak to the kitchen door with a camera it flies off. I have tried to take pictures from inside the house with very little luck until today. These are the best pictures I could take, and, in them, you can see the curved beak, the fat speckled chest, and the long, thin tail. 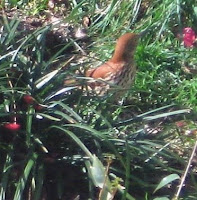 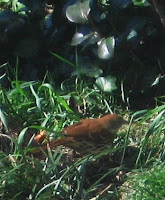 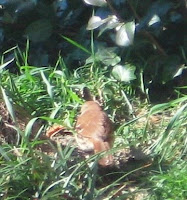 Here are the usual suspects (a goldfinch with its head in the feeder and Mr. and Mrs. Cardinal): 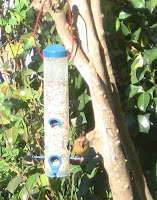 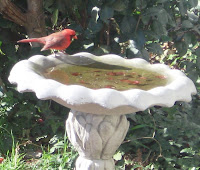 Isn't it about time for the next Backyard Bird Count? :)

Good point, Jamberry! Thanks for the reminder . . . and I just updated the backyard bird count button!

YES, that HUGE thing is a bush . . . it is way taller than our shed . . . and we do have a redwood growing in our backyard and it is SMALLER than our bush! LOL!

Fabulous pictures! And thanks for the reminder about the backyard bird count.

Stay tuned . . . I am planning a post about scaffolding bird watching . . .